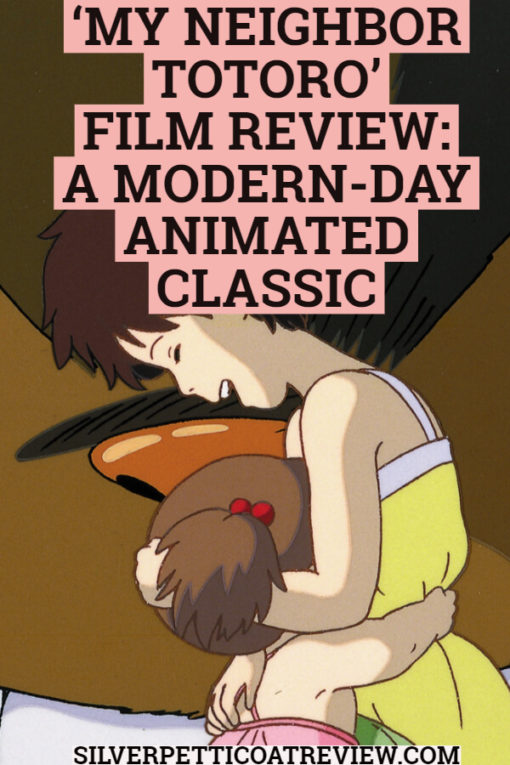 The praise is well deserved.

My Neighbor Totoro is a hopeful film about two young sisters finding magic in everyday life, helping them to cope with life’s uncertainties.

To Meet a Totoro

Sisters Satsuki and Mei, along with their father, move into an abandoned house in a rural community. The house is considered haunted. They’ve moved there to be closer to their mother, who is a long-time patient at a hospital. We never do learn why she’s there, what’s her diagnosis. But she’s not there, not there at home for her growing daughters. And her absence is felt profoundly.

Essentially, the film is about these girls settling into this new house, this new community, the new school, this way of life without their mother. An elderly neighbor takes care of Mei, while Satsuki is at school and their father is at the university where he teaches.

In exploring her new surroundings, little Mei discovers some mysterious creatures collecting acorns. She follows them and ends up falling down a crevice in a giant camphor tree, landing upon Totoro in the magical hollow of the tree. Totoro is this giant, furry, cuddly creature, also initially a bit scary, a wood spirit.

But when Mei tries to retrace her steps to show her sister and father where Totoro lives, she can’t. Yeah, it seems that Totoro shows up when you least expect it.

Anyhow, I don’t what to rehash the whole plot, but the sisters’ relationship with Totoro sends them on some adventures and helps them to deal with all the fears and uncertainties of having a sick mom.

A Beautiful and Poignant Favorite

As a Studio Ghibli fan, I have made it a point through the decades to see their films, as many as I can get my hands on anyhow. All are touching, beautifully animated, wonderfully told. Some have wormed their way into my heart more than others.

My Neighbor Totoro is probably my all-time favorite Studio Ghibli film, edging out by a smidgen Kiki’s Delivery Service. Truly, I never tire of watching it, and I have joyfully passed along this love to my own children.

RELATED: KIKI’S DELIVERY SERVICE (1989): A COMING-OF-AGE CLASSIC WITH A LESSON FOR LIFE

If you’re looking for a film about the magic of childhood, the wonders of nature, the uncertainties of life, well, this is your film. My Neighbor Totoro is a touching, joyful gem about curiosity and openness. And about how nurturing those qualities will see you through life and its many vicissitudes. Be open, stay curious, ask for help, let others help you, and embrace what life has to offer.