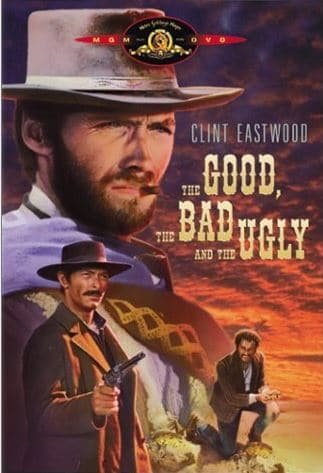 Well, this week’s film was certainly a change from the usual romance. Nonetheless, I was thoroughly charmed by Clint Eastwood in The Good, the Bad, and the Ugly. I thought the plot was as funny and engaging as it was creative. I’ll admit this is actually the first film I’ve ever seen Clint Eastwood in, and I was pleasantly surprised. He was charming and quite handsome in my opinion. He definitely depicted the kind of loner cowboy with a heart of gold that I would totally go for. I never realized how attractive Eastwood was when he was younger. I’m a sucker for a pretty face, though, so that definitely helped raise my opinion of the film.

I’ve been getting more and more used to watching the older style of films, but I have to say I was still a bit wary when I decided to tackle this one. I’m not a fan of westerns by any means, and I was a bit nervous approaching something that wasn’t your typical romance. This movie took me by surprise, however. If all westerns were like this one, I think I might give them another chance. As a child my grandfather, who is utterly in love with westerns, always tried to get us kids to watch them with him. They never looked very appealing to me, though. I’d always come up with some excuse to leave the room after sitting dutifully watching for about ten minutes. The Good, the Bad, and the Ugly, on the other hand, kept me thoroughly entertained during its entirety.

For those of you who don’t know, the plot revolves around a trio of gunslingers competing to find a buried stash of Confederate gold during the American Civil War. If for no other reason than the cleverness of it, I would recommend the movie just based on Eastwood’s manipulation of one of the other gunslingers in the beginning. His repeat con to claim a reward for the outlaw and then set him free so he can claim another reward for him in another town is brilliant. Eastwood’s comical side comes out clearly in these acts. The antics of the entire trio are truly hilarious, and the ending, with Eastwood’s character getting his just retribution while still being a good guy at heart, is one I will never forget.

I can’t say that I’m a convert for all westerns, but I think I’ve at least become a Clint Eastwood convert. The man’s got talent, and I’m interested to see some of his other work. I hope you give this great film a chance to convert you as well. And join me next week when I talk about Chinatown.

Content Warning: This film is Rated R for some violence.

Are you a fan of Clint Eastwood? Do you have any suggestions for what other movies I should watch? Sound off below…

If you enjoyed this week’s Journey Into Old Movies, make sure to check out the rest here.

Want some ideas for great romantic comedies to watch? Take a look at this.

Our romance-themed entertainment site is on a mission to help you find the best period dramas, romance movies, TV shows, and books. Other topics include Jane Austen, Classic Hollywood, TV Couples, Fairy Tales, Romantic Living, Romanticism, and more. We’re damsels not in distress fighting for the all-new optimistic Romantic Revolution. Join us and subscribe. For more information, see our About, Old-Fashioned Romance 101, Modern Romanticism 101, and Romantic Living 101.
Pin this article to read later! And make sure to follow us on Pinterest.
By Rebecca Lane on September 24th, 2015