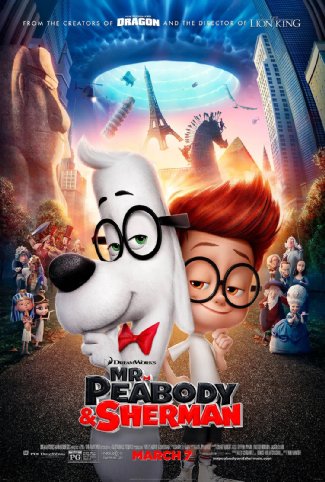 When I was a young child I would watch many Saturday morning cartoons, one of them being The Rocky & Bullwinkle Show, however, I only watched the show for the segments known as Mr. Peabody’s Improbable History. Even if they were a bit short I still found them to be entertaining, educational and witty. When I found out that DreamWorks was making a feature film around the shorts, I was both optimistic and skeptical, particularly considering how Jay Ward’s other cartoon to film adaptations turned out. When I finally got around to watching the film, I went in with a cautious but hopeful mindset.

The film is about Mr. Peabody, the most intelligent creature on the planet, and his adopted son Sherman as they go on time traveling adventures in Mr. Peabody’s WABAC. Once Sherman starts school, his home life makes him the target of bullying by a popular girl named Penny and they both end up fighting. This results in Mr. Peabody trying to mend relations with the bully’s parents by inviting the family over for dinner. During the dinner, Sherman decides to show Penny the WABAC without Mr. Peabody knowing and ends up losing her in Ancient Egypt. The two now must go back in time to find her and bring her back to the present, while many time travel shenanigans ensue. On the one hand, such a story can be predictable, but on the other hand, the film makes up for it by taking full advantage of the different time periods Mr. Peabody and Sherman travel to. These sequences of the film allows for some fast paced action, gives room for the animators to show their talent, gives the film its humor, and feels most like the classic cartoon. The film respects the original cartoon, Rocky and Bullwinkle fans will spot the references made, as I did, and the atmosphere is very reminiscent of the old cartoons. Even the opening sequence of Mr. Peabody and Sherman going back to the French Revolution feels exactly like an episode of Mr. Peabody’s Improbable History. It does what any good adaptation should do: it expands on the source material while still maintaining the eccentric tone and wit of the original animated shorts. As stated before, most of the humor occurs in the historical settings with great visual gags, slapstick comedy and fun pokes at both contemporary life and history, which can appeal to both kids and adults.

Another element that I really, really enjoyed about the story is the background the film gives for Mr. Peabody and Sherman and the emotional subplot of Mr. Peabody’s parenting coming into question simply because he is a dog. Even though Mr. Peabody is pretty much the smartest creature on the planet, there are still people against the idea of a dog being the adopted father of a boy, specifically a social worker named Mrs. Grunion. No matter what anyone else thinks of Mr. Peabody as a parent, he is a good parent, even though he is different. This message can apply to plenty of different family types, such as interracial adoption or adoption in general. Strictly in my opinion, I interpreted it as being symbolic in that it parallels the issue of homosexual couples adopting children. In the film, Sherman is bullied because his father is a dog and is even called a dog himself, that is, your parent is gay so you must be gay. I found such subtle symbolism not only clever, but also surprising, especially coming from a DreamWorks film.

In the original animated shorts, Mr. Peabody was depicted as a sarcastic and cold intellectual. In this adaptation, while still intelligent and sarcastic, the character is more attentive, caring and fatherly. He is so intelligent and talented that it is almost admirable. Personally, I found his “deep regard” for Sherman and the great lengths he goes to in order to prove that he is a good parent, touching and heartwarming. Sherman is inquisitive, innocent and wide eyed. As he interacts with other kids his age, he begins to want more independence and wants to prove to his father that he is not as helpless as he seems. Penny starts out as such an unlikable and, to me, annoying character who hates Sherman because he knows more about history then her and he comes from a different kind of family. However, as the film goes on, she starts to like him. The writers do not give any real reason for this; she just does it because the plot says so. The same can be said for Sherman liking her. There is not much else to Penny other than that. One thing I will say about her character that I did like was how she pushes Sherman out of his comfort zone thus allowing him to discover how capable he is on his own. This is nicely illustrated with the scene of the two flying over Italy during the Renaissance period on Leonardo Da Vinci’s flying machine with Sherman behind the controls. Mrs. Grunion is a bit one dimensional and seems to have been thrown into the film simply because the writers felt like they needed a villain. The historical characters are all funny and likable with each one having their own unique personality. Much of the humor comes from them and they have so many great lines, I don’t think it is possible to catch them all in a single viewing. Basically, the characters who feel like they belong to the old cartoons are the enjoyable ones while the ones made for the film feel uninspiring.

DreamWorks certainly took advantage of their time travel premise with the animation. With each place the characters visit, the film makes these places look grand in scale and the animators capture the feeling of each location’s respective time periods. Moreover, the camera work and animation boarding is also great, with shots that show detailed and impressive historical landscapes. Some of the highlights of the animation are many of the action scenes as each one is fast paced and creative. The scenes of the characters traveling through the time stream are also interesting, with bright colors and fluid movements. Another element of the animation that I really like is the visual representations of what is going on in Mr. Peabody’s mind as he works out a solution to a problem. His careful and critical thought process reminds me of Sherlock Holmes with how he thinks things through and can easily visualize his mathematical solutions. Mr. Peabody & Sherman is certainly the most visually pleasing of all the Jay Ward film adaptations.

Mr. Peabody & Sherman may not be the greatest DreamWorks Animation film, but it is still an enjoyable and entertaining film with nice animation and great humor. I would not say this is a must watch but if you are a fan of the old cartoons or if the premise interests you, then go ahead. You won’t be disappointed. As for me, I’m glad I saw it as it is not only a good adaptation of a classic cartoon from my childhood but also a well-deserved and enjoyable adaptation of a Jay Ward cartoon.

Our romance-themed entertainment site is on a mission to help you find the best period dramas, romance movies, TV shows, and books. Other topics include Jane Austen, Classic Hollywood, TV Couples, Fairy Tales, Romantic Living, Romanticism, and more. We’re damsels not in distress fighting for the all-new optimistic Romantic Revolution. Join us and subscribe. For more information, see our About, Old-Fashioned Romance 101, Modern Romanticism 101, and Romantic Living 101.
Pin this article to read later! And make sure to follow us on Pinterest.
By Moriah Burbank on March 29th, 2015