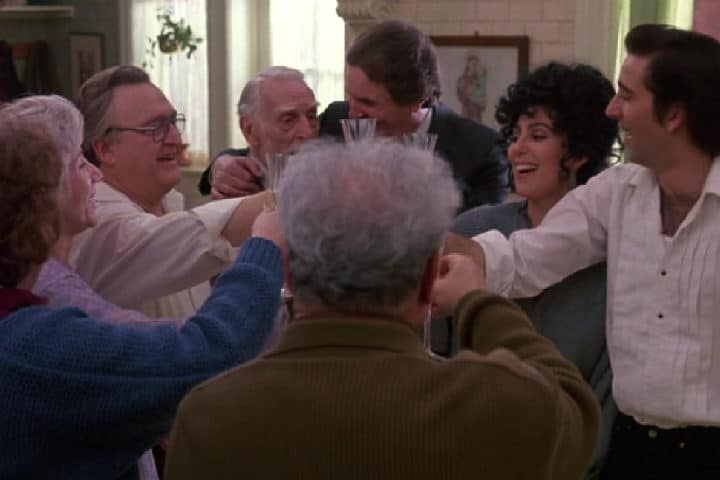 Moonstruck is a classic family film about life and love deserving of its spot in the eternal hall of fame. I struggle to call it a rom-com because it is so much more than that. While everything is rooted in reality there is a magic touch to every scene that makes it stand out from the rest of the romcoms we know and love.

Related post: While You Were Sleeping – A Rom-Com Christmas Classic

More than just a love story

Everyone in the film starts off a little bit unhappy with life and what it has brought or taken away from them. Despite Loretta (Cher) and Ronny (Nicolas Cage) being the lead characters, this is definitely an ensemble film. The beauty of Moonstruck is that each character has a story arc of their own. Everyone has their own moments to shine in.

Loretta and Johnny – A marriage agreement of convenience

Moonstruck starts off with a proposal of marriage. It’s instantly clear to the audience how hilariously mismatched the pair is. Johnny can’t even propose without being corrected on the way he is doing it every step of the way.

Cher won an Oscar for her portrayal of Loretta, a woman who has given up on finding love and settled for marrying just for the sake of the tradition of being married. Loretta is convinced that not doing things the right way the first time she married caused the bad luck that led to her husband being killed by a bus. This time she is determined to avoid the bad luck by doing everything right. Naturally, this means she is doing everything wrong! That is to say that she is going against her instincts in order to do what is deemed right.

As soon as Johnny has proposed, he flies off to Italy to be at his mother’s bedside and leaves Loretta to sort out what he calls bad blood between him and his brother, Ronny. 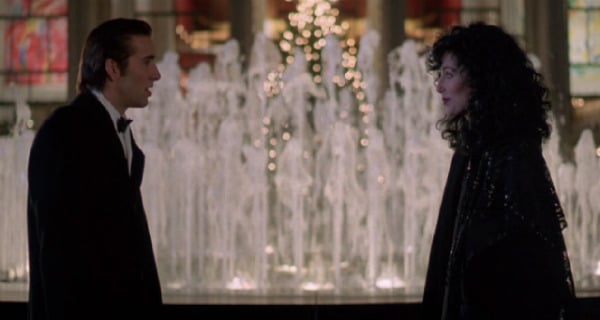 So, off Loretta goes to make peace with the brother. As soon as the two meet, we know we are in for something very interesting and special indeed! Their first meeting is dramatic, to say the least!

Ronny has been wearing his pain and misery on his sleeve for everyone to see for years. So everyone tiptoes around him, thinking he needs space to wallow in his misery. However, Loretta doesn’t allow Ronny to feel sorry for himself while Ronny doesn’t want Loretta to settle for less than she deserves. It is clear that they are on the same wavelength and a perfect match straight away. Sometimes you just know!

These two have some crazily intense chemistry going on and the way they both bloom after meeting each other is just a pleasure to watch. They breathe life back into each other’s lives without even meaning to and have the audience at the edge of their seats as Loretta stubbornly decides to go through with her marriage to Johnny despite clearly having fallen for his passionate brother.

Here is one of the many romantic exchanges between the lead pairing. They manage to be funny while being incredibly tragic at the same time.

Ronny: “You run to the wolf in me. That don’t make you no lamb. You gonna marry my brother? Why you wanna sell your life short? Playing it safe is just about the most dangerous thing a woman like you could do. I mean, you waited for the right man the first time. Why didn’t you wait for the right man again?”

Loretta: “Because he didn’t come.”

Sometimes the right person comes along just when one has decided to stop looking for him or her.

There is something to be said for the passionate declarations of love in this film. If one listens carefully, they are verging on the ridiculous and hilariously so. But, there is something very real to them. When someone can’t think straight because of the extreme emotions running through them, they are rarely capable of being as eloquent as Shakespeare. The nonsense they say is all the more romantic for it. Because it is clear that they are barely containing the passion that is threatening to burst forth and consume everything around them.

What one often remembers from such moments are not the words but rather the fiery look in their eyes and the way they become breathless after such a speech as if they have just run a marathon in their effort to get to this point and place and bare their soul to you. Nicolas Cage delivers each line as if love has finally allowed him to come up for air for the first time in years after drowning in misery and self-pity. He depicts someone long starved of love perfectly. It is no wonder he is so enamored with opera!

I adore every line of this film and can see why it got an Oscar for best writing. It’s chock-full of wonderful thought-provoking dialogue and wholly deserving of the award! 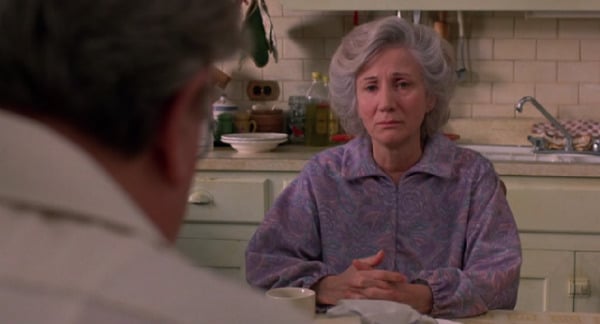 Another Oscar-winner was Olympia Dukakis for her portrayal of Rose Castorini. There are at least three love stories in this film and one of them is between the parents of Loretta. They have lived together for 52 years and Cosmo is finding himself scared of the future which seems to hold nothing but death for him. So he goes out of his way to try to reassure himself that he is alive. As with many men who go through this type of age-related life-crisis, he gets himself a mistress.

A wife always knows, but the way Rose handles the situation is very interesting. Since she chooses to turn something of a blind eye to this affair for a while. She does this as a way of allowing her husband to get through this difficult phase in his life. It is yet another way of showing her love and understanding of him. The character of Rose was simply wonderful, lovely, and refreshingly direct.

So, Rose’s advice to Loretta upon finding out that she is getting married to Johnny is a very telling one. She may still love her husband but still wants to save her child from a similar fate down the line as any parent does.

Rose: “Good. When you love them, they drive you crazy because they know they can.”

A must-watch film for lovers of romcoms and family films!

The Castorinis are a pretty close-knit family, yet they spend most of their time apart during the events of the films. Just like in an opera piece, the movements keep building on each other until they come crashing together in the final scene. This is where secrets come spilling out and important decisions are made. All are out in a fabulous fashion and we get to see the outcomes of the showers of confessions in the deliciously hectic climax of the story. Even the grandfather adorably states that he is confused.

Throughout the film, most of the characters struggle to be happy in their attempt to keep to certain traditions and do things the right way. Along the way, they learn to let go and make choices that may not be the ones expected by society, but will ultimately make everyone much happier. They say that a full moon makes people do crazy things. But, perhaps, far crazier is not acting on the effects of the moon. Perhaps playing it safe is the most dangerous and crazy thing that people can do.

This film will leave you filled with joy and a lasting warmth from the Italian music to the parts that opera and the moon play in the story. Because sometimes life has to fall spectacularly apart so that all the pieces can fall into place correctly, like a puzzle.

Content note: Moonstruck is rated PG. So go forth and watch as a family without fear. Some intimacy is implied, but the scenes always end before getting explicit.

Where to watch: Moonstruck is available to rent on Amazon and to buy on DVD and Blu-ray.

Have you seen Moonstruck yet? What is your favourite line or character? The grandfather is quite possibly my favourite. Sound off with your thoughts on this fantastic film below!

Our romance-themed entertainment site is on a mission to help you find the best period dramas, romance movies, TV shows, and books. Other topics include Jane Austen, Classic Hollywood, TV Couples, Fairy Tales, Romantic Living, Romanticism, and more. We’re damsels not in distress fighting for the all-new optimistic Romantic Revolution. Join us and subscribe. For more information, see our About, Old-Fashioned Romance 101, Modern Romanticism 101, and Romantic Living 101.
Pin this article to read later! And make sure to follow us on Pinterest.
By Yaroslavna Simdyankina on August 1st, 2017