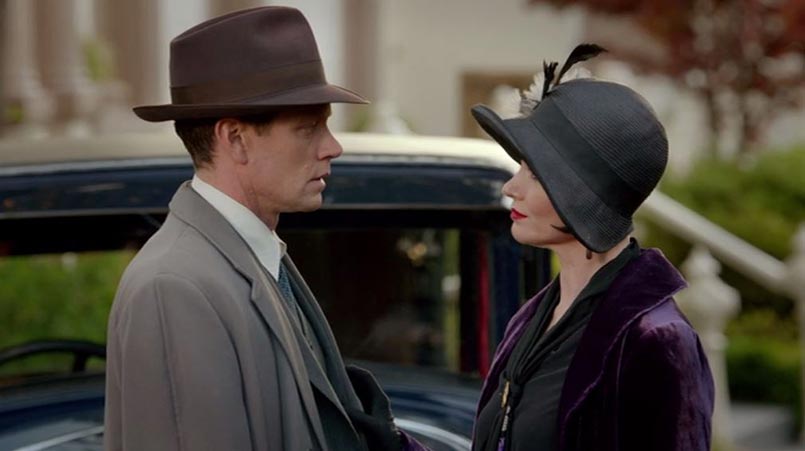 “Murder and Mozzarella,” episode 3 in season 3 of Miss Fisher’s Murder Mysteries, was an exciting episode. It featured some noncompliant suspects, Australia’s version of the mafia, and a long-running family feud over passion and food. But, equally importantly, it featured a lot of Jack-appreciation. (Ahem, I mean more importantly. I am biased.)

The grandmother of an Italian family is killed, and the case brings our impeccable detectives in between a boiling war of two Italian families. Phryne, of course, has a little romance of her own with a family member she meets during the case. Jack, in the meanwhile, is courted by an Italian woman from the other family whom he’s always cared for. (Ummm, WHAT?! WHO IS THIS WOMAN AND WHY IS SHE TRYING TO COME BETWEEN THE GREATEST LOVE STORY OF ALL TIME?!)

While this episode gave me stress for a little bit, mainly all the parts with Jack and the woman who was not Phryne, it was one of those good episodes that give the audience lots of flecks of romance to live on. Jack and Phryne both circle around each other, dating other people but are told by their love interests that their heart is somewhere else. Aka confirming that Jack and Phryne only love each other!!

Jack also gets back at Miss Fisher and finally has a love interest of his own to make her jealous. (Or whatever Phryne’s version of ‘jealousy’ is. I think it makes her want to intimidate the other woman.) Poor Jack is usually too aware of Phryne’s consorting, but in this episode we have her asking him what he was doing last night.

PHRYNE: “Burning the midnight oil, Jack? Grappa will do that.” (Grappa is apparently an Italian wine…but I think Phryne is referring to Concetta, the Italian woman interested in Jack.)

PHRYNE: “Oh, I was tucked up in bed at a sensible hour.”

Phryne cuts him off in usual fashion because she’s just happened to discover a relevant clue to the case at this juicy moment. Later, Jack asks her why she was interested in his evening when she herself didn’t say what she was up to, and she lightly replies that she was just making civilized conversation. Lies, Phryne, lies! But, in an interesting and new turn, Miss Fisher was too busy on the case to ravish men whose names were not Jack.

In their trademark fashion of exchanging comments of love through metaphors and subtlety, they confirm at the end of the episode that they’re still single…for each other. “Not eating Italian tonight, Jack?” Phryne asks, referring to his Italian girlfriend. “Strano’s is closed,” he replies, alluding to the fact that they are no longer together. “Looks like you’ll have to make do with me,” a happy Phryne says. “Looks like we’ll have to make do with each other,” Jack smiles and holds up a bottle of wine. These two!

Miss Fisher’s Murder Mysteries can be found on Netflix (all 3 seasons), Acorn TV, and occasionally on PBS while you’re on the treadmill at the gym. What did you all think of  “Murder and Mozzarella?” Sound off below…

Our romance-themed entertainment site is on a mission to help you find the best period dramas, romance movies, TV shows, and books. Other topics include Jane Austen, Classic Hollywood, TV Couples, Fairy Tales, Romantic Living, Romanticism, and more. We’re damsels not in distress fighting for the all-new optimistic Romantic Revolution. Join us and subscribe. For more information, see our About, Old-Fashioned Romance 101, Modern Romanticism 101, and Romantic Living 101.
Pin this article to read later! And make sure to follow us on Pinterest.
By Amirah Yasin on December 7th, 2015