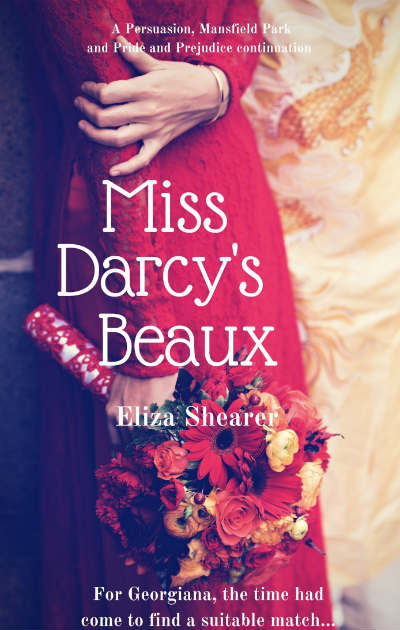 Eliza Shearer’s Missy Darcy’s Beaux takes a few supporting characters from our favorite Austen novels and gives them a voice. She brings back characters from Mansfield Park and Persuasion into the life of Pride and Prejudice’s Georgiana Darcy. The novel is in true Austen style and has all the elements of a Regency romance.

Miss Darcy’s Beaux follows Georgiana Darcy to London with her aunt, the formidable Lady Catherine de Bourgh, who is determined to find her a husband. But will Georgiana do as she is told and marry one of the candidates chosen by her aunt, or fight for true love instead?

The book starts out with Pemberley in a tense state with Elizabeth expecting another baby. The relationship between our favorite couple and Georgiana is sweet and you sense the close ties between the family. Mr. Darcy then takes his Aunt Catherine up on her offer to introduce Georgiana into society. Georgiana goes reluctantly.

On her journey to London, however, romance finds her when she is rescued by a dashing young man. The incidence, of course, changes Georgiana. Her foray into London society afterward is equally momentous.

Shearer brings the drama of finding Georgiana a husband to life with characters we know and love a part of it. Georgiana doesn’t like all the whirl but she finds some points of light in the social scene. She meets Captain Wentworth and his wife, Anne. They quickly become friends. I enjoyed reading the wholesome relationship between them. Most importantly, she meets Captain William Price (Fanny Price’s brother), her savior from earlier. The romance in the book then begins in earnest.

Georgiana is modest and this conflicts with her Aunt Catherine’s plans. She is also still haunted by her romance with Wickham. Therefore, Miss Darcy finds herself in a love triangle with Price and Cosimo, a Wickham type character. Shearer keeps you on your toes a bit as to the conclusion of the romance.

Another enjoyable point of the book is seeing how many of Austen’s characters meet and interact. I always wondered what happened after the epilogue of Persuasion. Furthermore, it was good to see minor characters like William Price get a role. They are often the ones that support the bigger stories. However, the main shining star is Georgiana.

Georgiana is entirely likable in this novel.  She is is mature and intelligent and is the antithesis of all the other husband seeking women. Georgiana maintains her integrity and romantic hopes despite the challenges. It was uplifting to read her story. However, there was one point in the book that was bothersome.

The ending felt a tad rushed. One minute there is a love declaration, the next there is a marriage and epilogue. A bit more transition would make it more romantic.  Despite my feelings on the rush, the story keeps Austen’s romantic sensibilities alive.

The book’s story is perfect for the screen whether in film or TV. Elinor Tomlinson, who did play Miss Darcy once, could reprise the role. As for William Price, I recommend James Norton. He kept popping in my mind during the story. Therefore, I think these two are the best pairing for the romantic couple.