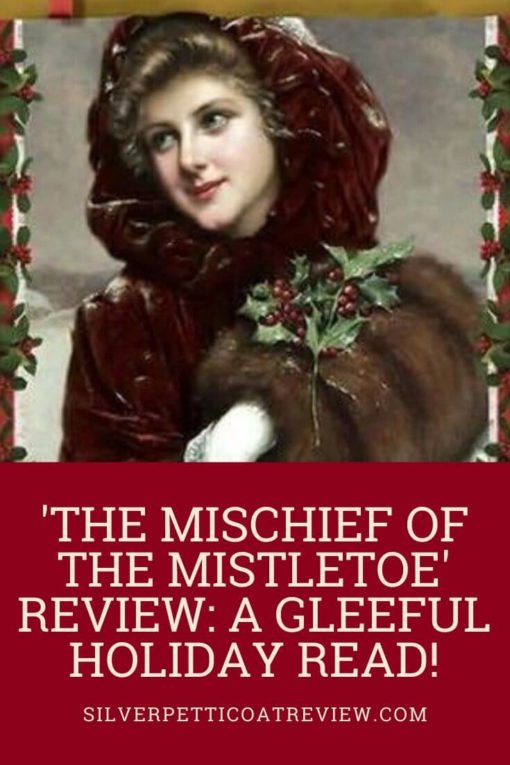 Jane Austen makes an appearance in Lauren Willig’s romantic book, The Mischief of the Mistletoe.

Arabella Dempsey’s dear friend Jane Austen warned her against teaching. But Miss Climpson’s Select Seminary for Young Ladies seems the perfect place for Arabella to claim her independence while keeping an eye on her younger sisters nearby. Just before Christmas, she accepts a position at the quiet girls’ school in Bath, expecting to face nothing more exciting than conducting the annual Christmas recital. She hardly imagines coming face to face with French aristocrats and international spies…

Reginald “Turnip” Fitzhugh—often mistaken for the elusive spy known as the Pink Carnation—has blundered into danger before. But when he blunders into Miss Arabella Dempsey, it never occurs to him that she might be trouble.

When Turnip and Arabella stumble upon a beautifully wrapped Christmas pudding with a cryptic message written in French, “Meet me at Farley Castle”, the unlikely vehicle for intrigue launches the pair on a Yuletide adventure that ranges from the Austens’ modest drawing room to the awe-inspiring estate of the Dukes of Dovedale, where the Dowager Duchess is hosting the most anticipated event of the year: an elaborate 12-day Christmas celebration.

Will they find poinsettias or peril, dancing or danger? And is it possible that the fate of the British Empire rests in Arabella and Turnip’s hands, in the form of a festive Christmas pudding?

Such reads the official synopsis of Lauren Willig’s seventh book in her twelve-book Pink Carnation series. The Mischief of the Mistletoe is nothing short of a gleeful read, full of comic misadventures and fun romance. Jane Austen even puts in a cameo.

Plus, Turnip Fitzhugh is a romantic hero so rarely portrayed in romance literature. He’s a real breath of fresh air, a gallant goof, good to the bone. What you see is what you get – no Byronic brooding or rakish mystery or sardonic bad-boyishness. Turnip’s just a carefree boyish charm that bumbles right into your heart.

The Mischief of the Mistletoe draws inspiration from Austen’s unfinished novel The Watsons. In the story, a young woman of limited means, who has spent the past many years living as a companion to an elderly rich aunt, finds herself suddenly abandoned by her aunt. She’s then thrust back into the estranged bosom of her family.

Unfortunately, Arabella Dempsey never landed a husband in her many years amongst the ton in town. So, when her aunt remarries, the aunt discards Arabella. Arabella then heads home to Bath and her own impoverished family.

Mom’s long dead. Vicar dad is ill and out of work. Her little sisters are also estranged and jealous of Arabella’s previous opportunities. It’s some dire straits, so Arabella decides to take a teaching position to lessen the financial burden.

It is at the school she quite literally bumps into Turnip Fitzhugh, a well-to-do member of the ton, far above her poor station. Well, he bumps into her.

Turnip has been a rather bumbling fool in the previous six books, putting in minor comedic appearances. He’s depicted as something of the village idiot in the series, leaving some folk to think he’s the Pink Carnation. The reasoning being that no one could be that dumb without it being a front. But you don’t need to have read the previous books to enjoy this one.

Arabella, on the other hand, is a sensible, unassuming, young woman, forever in her place and knowing her lesser place. But any friend of Jane Austen is also going to be a woman with spunk, intelligence, and humor. You just have to peel her away from her permanent position of blending into the background.

Through one comic mishap after another in The Mischief of the Mistletoe, Turnip and Arabella find themselves thrown together and trying to decipher the meaning of cryptic messages hidden in Christmas puddings.

Is it just a schoolgirl making plans with a paramour? Or is something more sinister afoot? Something involving international espionage and the deadly and elusive French spy, the Black Tulip? And this is a romance, so maybe there’s more sobriety and seriousness to the gallant goof than meets the eye. And perhaps under that demure and unassuming façade is a woman who loves to laugh.

Overall, The Mischief of the Mistletoe is hands down my favorite book in Lauren Willig’s Pink Carnation series. I have read it multiple times, sometimes reading it again just after finishing it. It is truly a gleeful read. There is a very romantic scene involving a trellis, a tower, sudden darkness, a laughing fit and delectable disarray. It is soooo good. Funny and romantic at the same time.

Turnip Fitzhugh is also an original, engaging romantic lead in this genre. He’s described variously as a Bingley-type and as Nature’s golden child, a kindly, good man.

And while I enjoy tortured, mysterious Byronic heroes and reformed rakes as much as the next, there is something so refreshing about an open book, a gallant goof à la Turnip Fitzhugh, who bumbles his way into romance and readers’ hearts.

The Mischief of the Mistletoe is a holiday treat to be enjoyed year-round.

Adaptation Recommendation: I would love to see the whole Pink Carnation series adapted to the small screen, multiple seasons following different characters. As for who could play Turnip, well, Chris Hemsworth and Chris Pratt come to mind. As well as Jack Lowden, whose current real-life love interest, Saoirse Ronan, could play a lovely Arabella.

Extra Treats: On her website, Lauren Willig has an outtake from The Mischief of the Mistletoe, which can be found here, as well as an epilogue here.

Have you read The Mischief of the Mistletoe? What are your thoughts on this romantic holiday read? Drop a comment below.

1 thought on “The Mischief of the Mistletoe: A Gleeful Holiday Read Year-Round”