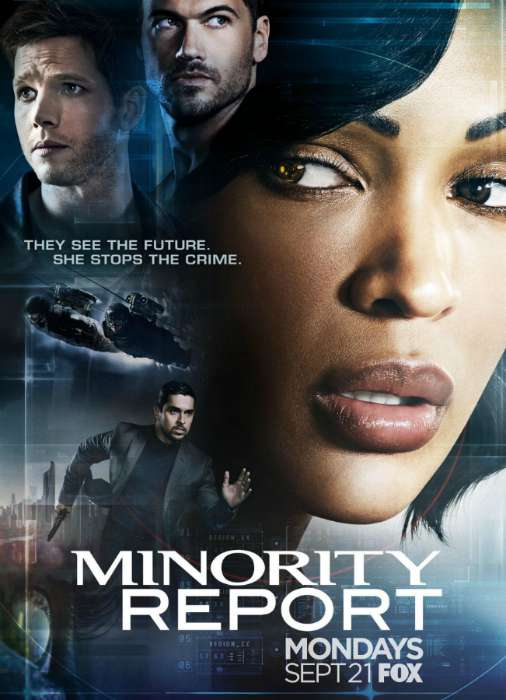 If there is a trend in 2015’s fall television season that I’ve noticed, it is that some new shows are taking inspiration from former box office films. Fox’s new sci-fi mindbender is based on a short story, yes, but additionally the movie of the same name, which starred box office superstar, Tom Cruise. Much to my chagrin, I didn’t carve out the time to watch the film that inspired this (I simply ran out of time), but I would presume the concept is the same though it’s about different characters. The show picks up ten years later when Precrime is now extinct and does have some intricate themes going for it. Minority Report, despite the advertising, debuted to mediocre ratings. 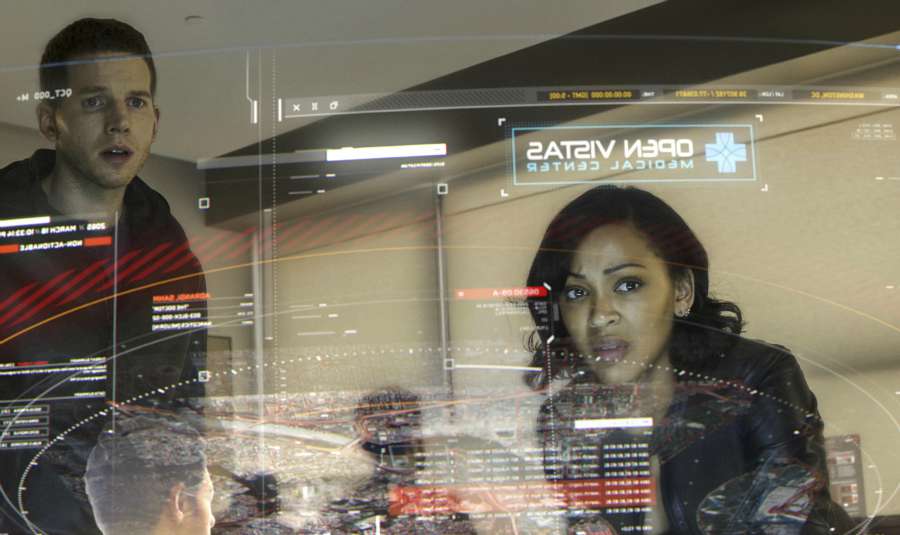 This story introduces us to three siblings: eldest is Agatha, and her younger twin brothers, Dash, and Arthur. As children, they were part of a revolutionary test program that saved the lives of the twins when they were born to their drug addict mother. Years later, the children begin seeing patterns and numbers psychically and then they saw murders. Because of their gifts, they were kept in the Precrime program until it was no longer needed and the three of them were placed in isolation, away from the world. But they cannot stay hidden forever.

Dash (Stark Sands) is unable to sit around as his visions continue to plague him. But without his brother Arthur (Nick Zano), he operates at half strength. His latest vision involves the death of a mayoral candidate’s wife, which pairs him up with detective Lara Vega (Meagan Good). Vega joined the force in order to be a part of Precrime, but it was obsolete before she was through the academy. Tired of picking up the pieces, she’d like to solve a crime (even if only one) before it happens. Dash’s visions could help her do just that.

Set in D.C. in 2065, this is certainly an interesting television development if nothing else. Not to mention, it has Steven Spielberg’s backing as a producer. I admire the “bigness” of the production and the balance between commonalities of what we know as our modern world (which helps keep the production easy to relate to) and a slick imagination of what the future might look like. The entire vision of the show is first-rate and plays to its sci-fi roots quite nicely. Everything from the cityscape to the technology, it’s all very snazzy. Unfortunately, I think the show tried a bit too hard to obtain this “feel” (it’s too intrigued by the neatness of its future) and in so doing, it falls short of being great storytelling. 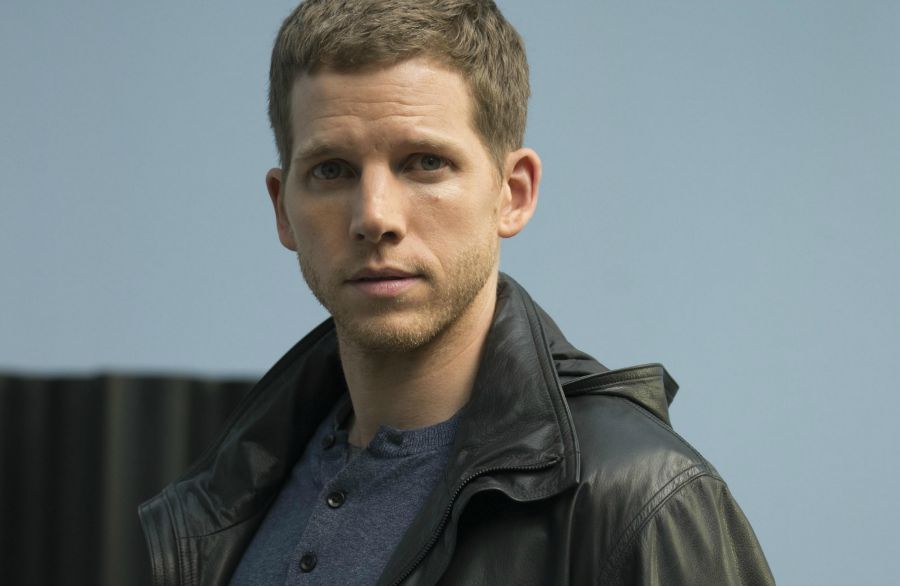 I did honestly enjoy the pilot (for now, it has a lock on entertainment values), but I also didn’t think it reached its pinnacle. That said, the cast is decent and the promise of more is there. I particularly enjoyed Dash; he’s the kind of good-natured character we’d like to be friends with. He reminded me of a kind of Fitz-like character from Agents of S.H.I.E.L.D. who has an inherently good nature (or seems to) that is hard not to like. His desire to stop bad things no matter the cost is admirable, even if it means exposing himself. Instead of trusting in his siblings, he takes a step towards trusting an outsider placing his freedom at risk. Overall, I’m not convinced of every portrayal in the cast and their respective characters, but am not opposed to hoping time will improve on this.

Any romance that might happen, I feel is likely to twist into an unrequited kind of love. Or that’s the vibe I picked up, and considering Lara and her boss clearly have some sort of past, I’m not sure the chances of a relationship has room in the script. From experience, I don’t think a viewer should pass final judgment on a pilot (either way). Most shows deserve a 3-5 episode commitment before a decision can be made. That’s where I stand with Minority Report. It has all the right tools at its disposal, which is half the battle, I’m now going to wait to see what it does with them. I’d like to see better, more focused storytelling. The intricacies involve Dash’s siblings, who are clearly a “bigger picture” story plan. Theirs is one bound to make us ask whether or not they’re good, bad or somewhere in between. 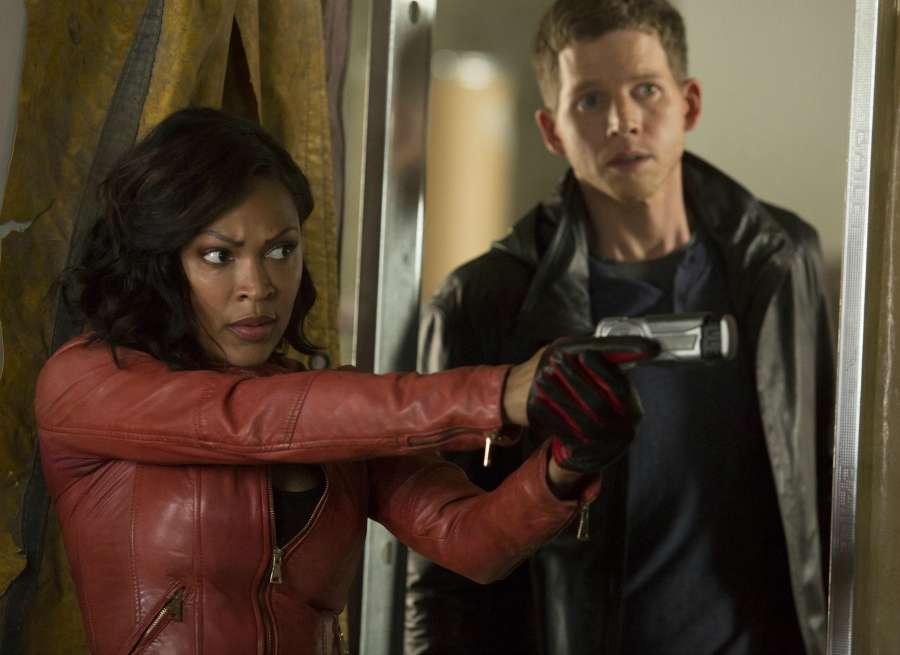 As a futuristic sci-fi concept, this is bound to be a great “fix” for avid fans. It moves along at a good pace and has an earnest hero who is easy to root for. I also like the caveat that involves solving a crime before they occur. Considering that and the futuristic setting, this is certainly one of 2015’s most unique premieres.

Did you tune into this premiere? Share your thoughts on it or the film on which it’s based down below. I’d love to know your thoughts.

Check out our Guide to 2015 Fall Television or see what else we’re watching, you can read more TV Reviews in the archives!

Our romance-themed entertainment site is on a mission to help you find the best period dramas, romance movies, TV shows, and books. Other topics include Jane Austen, Classic Hollywood, TV Couples, Fairy Tales, Romantic Living, Romanticism, and more. We’re damsels not in distress fighting for the all-new optimistic Romantic Revolution. Join us and subscribe. For more information, see our About, Old-Fashioned Romance 101, Modern Romanticism 101, and Romantic Living 101.
Pin this article to read later! And make sure to follow us on Pinterest.
By Rissi JC on September 25th, 2015