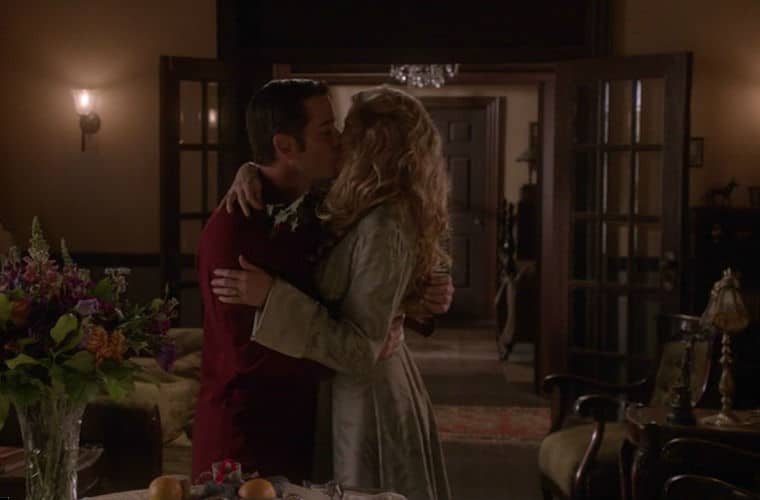 For ten years, the period drama Murdoch Mysteries has been a memorable entertainment source. The world introduces us to a cast of lovable characters, old-fashioned manners and quirks, and of course, a good mystery. The latest (US) installment is a Christmas case that is as charming as it is a fun puzzle to piece together. Here’s why A Merry Murdoch Christmas is a must see!

As A Merry Murdoch Christmas opens, we find the blissfully, happily married William Murdoch (Yannick Bisson) and Dr. Julia Ogden (Hélène Joy) on their way to a Christmas party. Their destination is a benefit for orphaned children, complete with an appearance by a young Mary Pickford and Santa Claus. But the festive mood quickly deflates when St. Nick is discovered murdered. 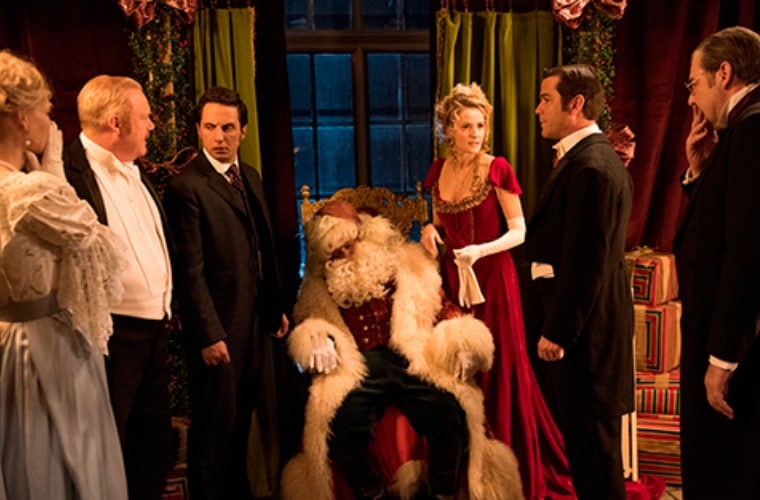 This sends Murdoch chasing the legend of Krampus, and derails the plans of Station House 4. All save for Murdoch’s trusted investigator, George Crabtree (Jonny Harris). George is prepping to leave the city, but at the last minute, his plans are canceled. This leaves him without a place to spend Christmas. But with the hunt for the Christmas killer on, everyone’s plans are in jeopardy as Station House 4 tries to save the spirit of Christmas.

As with each new story that comes from this 19th century Toronto-set series, this Christmas special is another addition sure to delight. An ordinary series might face a challenge when they set out to marry Christmas cheer with a detective story, but Murdoch Mysteries excels. A Merry Murdoch Christmas is like a warm cup of cocoa with some laughs and an emphasis on the importance of family.

The Merry Murdoch Christmas script sets a sassy example of what a good dose of humor can do for a script. For example, a scene when Murdoch brings George back to his and Julia’s lodgings. The laughter is easy to come, and the character reactions priceless. Also, a fun element this series has is the introduction to famous or influential people in history like the young Mary Pickford. Apart from her, period drama enthusiasts will recognize Downton Abbey alum, Brendan Coyle. But who he is or what his designs are will be up to you to puzzle out.

Though it’s wrapped in lighthearted humor, and endearing character quirks, the story also has an emotional pull. Perhaps it’s merely the Christmas cheer or the fact that I’m particularly nostalgic this time of year, but whatever the case, the story will tug at your heartstrings. It’s like an old-fashioned snapshot of Christmases past and represents the Christmas we can have today. Fans of Murdoch Mysteries, I can only say the following: Grab a mug of hot cocoa, take a break from the bustle of holiday busyness, and settle in for this charming Christmas story. It’s one not to be missed.

You can buy A Merry Murdoch Mystery on Amazon Video.

Content Note: The camera catches the victim but never shows a graphic depiction of the crime.

Our romance-themed entertainment site is on a mission to help you find the best period dramas, romance movies, TV shows, and books. Other topics include Jane Austen, Classic Hollywood, TV Couples, Fairy Tales, Romantic Living, Romanticism, and more. We’re damsels not in distress fighting for the all-new optimistic Romantic Revolution. Join us and subscribe. For more information, see our About, Old-Fashioned Romance 101, Modern Romanticism 101, and Romantic Living 101.
Pin this article to read later! And make sure to follow us on Pinterest.
By Rissi JC on December 5th, 2016