When you think of your childhood, attached to some of those memories are the Disney stories that enchanted us. With that childlike wonder and awe, we sat in front of the TV watching classics like Beauty and the Beast or 101 Dalmatians. (I even have photographic proof I did.) Even classics that weren’t in my era were part of my movie-going experience. Films like Mary Poppins starring the classy Julie Andrews.

RELATED | NEW DISNEY ADAPTATION, THE NUTCRACKER AND THE FOUR REALMS STARRING KEIRA KNIGHTLEY: WHAT WE KNOW SO FAR

Called a sequel, this film reinvents itself in a Great Depression era setting bringing with it new faces, and a reinvention of Mary Poppins. (This is actually the original setting of the novels penned by author P.L. Travers.) In addition to the return of the titular character, we’ll also catch up with a now grown Michael and Jane Banks plus a delightful cast of new characters.

Earlier this month, Disney dropped the first teaser trailer, and along with it, new images arrive.

Before we look at the trailer, here’s a synopsis from Oh My Disney.

Mary Poppins Returns is set in 1930s London, which is the time period of the original novels by P.L. Travers. The story follows Michael (Ben Whishaw) and Jane Banks (Emily Mortimer), who are now grown up. Michael is living with his three children (Pixie Davies, Nathanael Saleh, and Joel Dawson) and housekeeper Ellen (Julie Walters), in the house on Cherry Tree Lane. After Michael has a personal loss, Mary Poppins (Emily Blunt) comes back into the lives of the Banks family.

Enjoy the teaser trailer from Disney:

Delightful though it is, the trailer reveals next to nothing about the plot. All we get from it is that Mary returns and it’s “delightful” to see her again. (Which, of course, it is.) To discover more about the story, we have to go in search of a synopsis (listed above). It tells us the story will reunite Mary Poppins with her former charges, Michael and Jane Banks. Now all grown up, they face many different types of challenges. 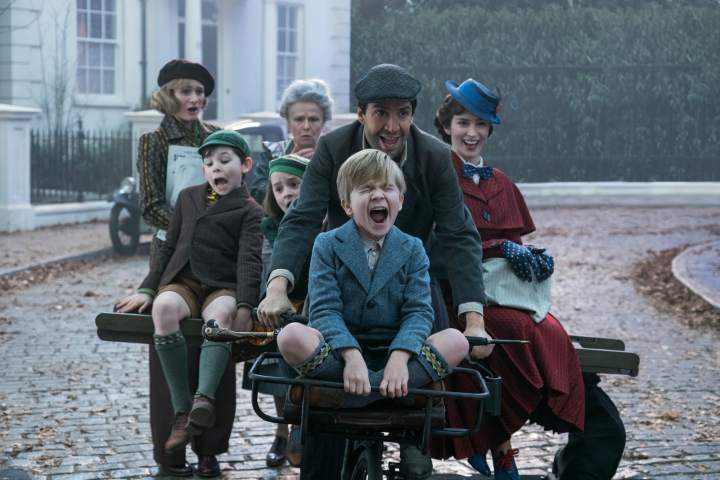 Playing these characters will be Ben Whishaw; Emily Mortimer; Meryl Streep; Colin Firth; Angela Lansbury; Lin-Manuel Miranda; and in the titular role, Emily Blunt. With its star-studded cast, I’ve no doubt everyone will do these characters justice. Many are period drama royalty, and despite some controversy, I do feel like Emily Blunt is ‘practically perfect’ in this iconic role. In the director’s chair will be Rob Marshall (Into The Woods).

With its appropriately cryptic teasers and charming “last look” in the mirror, this trailer leaves ardent fans anxious for more. It tells the viewer nothing but does precisely what it set out to accomplish, which is to inspire curiosity.

This ploy certainly works for me as I’m now all the more excited to watch this film. It might not have been one of my most favorite childhood movies, but the story is timeless, and now, it lives on for an entirely new generation to discover.

Are you as excited as I am for the return of this beloved Disney character? Drop a comment below with your thoughts, on the cast, the trailer, the images… or anything that takes your fancy. I’d love to chat about Mary Poppins Returns.

Our romance-themed entertainment site is on a mission to help you find the best period dramas, romance movies, TV shows, and books. Other topics include Jane Austen, Classic Hollywood, TV Couples, Fairy Tales, Romantic Living, Romanticism, and more. We’re damsels not in distress fighting for the all-new optimistic Romantic Revolution. Join us and subscribe. For more information, see our About, Old-Fashioned Romance 101, Modern Romanticism 101, and Romantic Living 101.
By Rissi JC on March 16th, 2018