The new fall TV season is forever and always an exciting time for me as a TV addict. This is why each year I read up on all of the new shows heading to the small screen and pick a few to check out. One of these new series is NBC’s new sci-fi, Manifest.

To outside observers, life for the Stone family is blissful. As our narrator tells us, elder brother Ben (Josh Dallas) and his wife Grace (Athena Karkanis) are still in love after fifteen years of wedded bliss; and their twins are the apple of their grandparents’ eyes. Then there’s the black sheep of the family, Michaela (Melissa Roxburgh). She’s who tells us their stories, and the fact that they are anything but perfect.

You see, Ben’s son Cal (Jack Messina) is battling childhood cancer, and Cal’s parents spend every waking minute trying to find a cure. As for Michaela, she’s dealing with professional issues of her own. But on this day, the entire family plans to fly back home from a vacation. That is until an overbooked flight separates them. As Ben, Michaela and Cal remain behind for another flight, the rest of the Stone family fly ahead as planned. This one choice changes everything.

When the later flight lands, what’s been a matter of hours for the passengers has in actuality been five years for their loved ones. 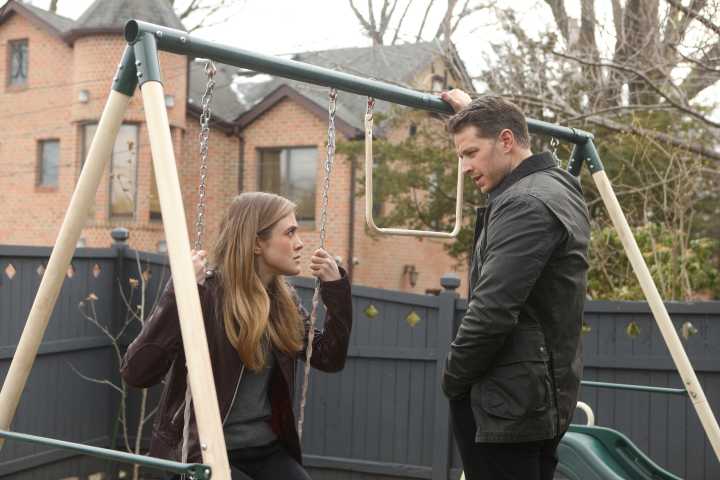 Prior to hitting the “play” button on this pilot episode, I went into this virtually blind. I knew next to nothing about the premise. Basically, all I knew was that there’s a plane, it’s likened to Lost, and on our TV screens again is Josh Dallas of Once Upon a Time fame. However, after viewing the first episode, I know more and I have to say, I’m curious.

The first installment keeps things basic. We don’t learn anything as to why this phenomenon occurs. Aside from the in-flight turbulence and an exploding plane, the writers give nothing away. Although the final image of a burning plane does suggest, as all good mystery shows do, there’s a conspiracy of some sort. What we do learn is through this experience, Ben and Michaela develop unusual abilities. Plus, a fellow passenger (played by Parveen Kaur) is now able to offer Cal hope with the possibility of a cure for his cancer.

Overall, what I love most about this first episode is that it’s quite good. The idea holds my interest and the conclusion leaves me interested enough to ask, “what’s next?” Though I don’t know that I’ll keep up in its current air dates, it’s certainly something I anticipate checking into in the future. I do like to give a show (either way) a good 2-5 episode block. What I also like about the story is that it’s soft on the sci-fi elements and more focused on characterization, which is personally more to my taste.

The romantic elements are slim in this pilot episode, but there is something there. The primary romances look to encounter quite a few hurdles, all of which is set up to break the hearts of characters, and us. There’s also a really thought-provoking thread of faith that I’ll be curious to see what the writers do with next.

In all, if you enjoy sci-fi stories or are a fan of the cast (all of whom are fantastic by the way), Manifest might be your next TV binge.

Where to Watch: You can stream the first episode of Manifest (at time of publication) on NBC.com or on Hulu (up to episode two now). You can also purchase episodes (as they air) on Amazon Video.

Content Note: The pilot episode is quite clean. There may be some minor profanity, and there are thematic elements. The show is rated TV-14, which I suspect some episodes will need.

Did you tune in to watch Manifest? Did you like or dislike!? I’m curious! Share all of your thoughts down in the comments.

Our romance-themed entertainment site is on a mission to help you find the best period dramas, romance movies, TV shows, and books. Other topics include Jane Austen, Classic Hollywood, TV Couples, Fairy Tales, Romantic Living, Romanticism, and more. We’re damsels not in distress fighting for the all-new optimistic Romantic Revolution. Join us and subscribe. For more information, see our About, Old-Fashioned Romance 101, Modern Romanticism 101, and Romantic Living 101.
Pin this article to read later! And make sure to follow us on Pinterest.
By Rissi JC on October 2nd, 2018