I love superhero films and Superman has been a favorite since I was a little girl. I remember watching Christopher Reeve as the ideal boy-scout with his good-looking charm and Margot Kidder with her cynical wit as Lois Lane. It was the fantastical about them that drew me in even if I still have very little interest in reading the original comic book stories (cringe away).

I then, unfortunately, turned to Smallville (I say unfortunately because of its addictive nature even after the whole show started to go down the tubes). By the end, Smallville showed a less than positive glimpse into what Superman could become (a whiner who spends too much time moping about how everything was his fault or lusting after an idealized version of Lana Lang).

Amy Adams as the next Lois Lane also promised something different, a Lois we could possibly identify with because of Adams’ immense likability factor.

Superman Returns, on the other hand, was goodish but with a Lois as bland as unbuttered toast. So when I heard that Henry Cavill had been cast in the updated version of Superman, I was ecstatic (and not just because he looks like a Greek God) because he also starred in one of my favorite film adaptations ever: I Capture the Castle. I knew he was capable. Amy Adams as the next Lois Lane also promised something different, a Lois we could possibly identify with because of Adams’ immense likability factor. But could the Man of Steel live up to all the hype?

After watching Zack Snyder’s version of the iconic Superman, the answer is both yes and no. Let me begin with the positives because Man of Steel has a lot going for it. First of all, the origin story of Jor-El played by Russell Crowe was amazing. More Sci-Fi than the comic book but also just so absolutely engrossing for the first 15 or so minutes of the film, that I almost wished the destruction of Krypton had been a full-length prequel to the Superman films. The visual effects, the acting, the backstory, the writing, everything about the beginning just worked.

As a whole, the casting for the remaining players was perfection. Henry Cavill has a pure star quality about him with a presence that made me believe he was Superman. His raw emotion in the film held me captivated by his immense power. Amy Adams did offer up the likability factor I had hoped for. I also appreciated the realness she brought to Lois Lane, something I have never seen before. I honestly believed she could have won a Pulitzer Prize for journalism as she was never played out to be the fool.

Honorable mentions must also be given to the supporting cast from Kevin Costner (totally loved him as a father figure), Diane Lane, Laurence Fishbourne (so fantastic as Perry White), to Christopher Meloni who was a scene stealer for sure. Overall, the acting was phenomenal. 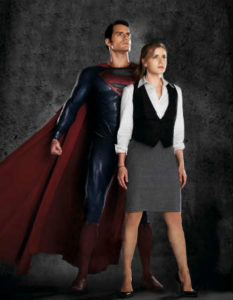 The story and script were also very good, but it is also where problems surfaced. The first half of Man of Steel worked on every level but then it felt as if the writer and director got carried away with explosions and fight scenes, forgetting that this was not the next Transformers film. The climax between Zod, his minions, and Superman dragged on forever and I mean that literally. Just because they had the budget for endless explosions doesn’t mean they should have continued on for as long as they did. More restraint would have strengthened Man of Steel.

And while I loved how the dynamic between Superman and Lois Lane changed from prior versions of the story (I won’t say how); restraint also could have been utilized in the damsel in distress moments of the screenplay. Though I do have a confession: I LOVE when the hero rescues the heroine (as long as she also does some saving of her own) and then when the hero carries said heroine, all the better!

However, the number of times the script had to contrive moments for Superman to save Lois while falling through the air was a little bit of overkill. Once was great. Two was fine. Three was when the writers needed to move on.

The number of times the script had to contrive moments for Superman to save Lois while falling through the air was a little bit of overkill. Once was great. Two was fine. Three was when the writers needed to move on.

Additionally, the romantic relationship between Lois and Clark needed more build up and more characterization. It was slightly rushed, so when romantic sparks did start to fly, I rolled my eyes a little. Romantic for sure, but I wanted more. I like to root for a relationship that builds on screen and doesn’t come out of left field.

As for the humor you usually find in Superman stories, this adaptation was severely lacking. While there were moments of humor in the screenplay and execution of the script with some good one-liners by Lois and laugh out loud facial expressions from Meloni, there did need to be more lightheartedness in a story about hope. This was not Batman Begins even though at times, the script acted like it thought it was.

While the film certainly had some failings, I walked away from the theater utterly entertained. Perhaps my expectations were too high for a film that plays out like a prequel to the Superman story. But because of the ending, I have a lot of hope that all the kinks will work out for the sequel. I definitely look forward to watching how the next film will unfold and have already started thinking about possible Lex Luthor casting ideas (Hugh Laurie could bring much-needed wit to the picture – still thinking of his one-liners in Sense and Sensibility). Overall, Man of Steel is a must see, so don’t miss it if you are one of the few who hasn’t seen it yet. If you do end up missing it, however, then definitely check it out on video. It’s worth a watch.

What did you think of Man of Steel? Agree? Disagree? Let me know in the comments!