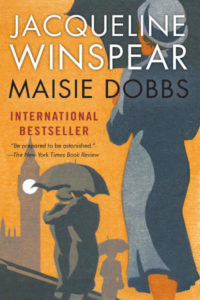 Maisie Dobbs is the first novel in Jacqueline Winspear’s detective series about its titular character, Maisie Dobbs, a private investigator and psychologist living between the wars in London, England. The 13th novel in the series has just been published this past March, so if you enjoy the first, which I’ll say right from the start that I did, then there are happily plenty more to come after.

The story opens in 1929 with an attractive woman in her mid-to-late twenties opening her very own investigating business. This is Maisie Dobbs, and as we learn later on, she is also an extremely intelligent, level-headed, well-educated, resourceful, thoughtful, hard-working, capable, sober woman. She’s been the apprentice of a renowned doctor, psychologist, investigator, Maurice Blanche, who’s recently retired, so she is now branching out on her own. She meets on her very first day at her new office the local jack-of-all-trades, Billy Beale, who immediately recognizes her as a field nurse from WWI, the very same nurse who helped to save his leg and his life. By the end of the book, he’s working for her.

The war and its aftermath provide fertile ground for a mystery. Such great social upheaval allows for the strange and unusual to emerge and a time of intense emotions can, to the writer of fiction, provide ample fodder for a compelling story, especially one concerning criminal acts and issues of guilt and innocence. After all, a generation is said to have lost its innocence in The Great War. The mystery genre provides a wonderful vehicle for exploring such a time. – Jacqueline Winspear, author of Maisie Dobbs

A Shroud of Sadness

But right from the beginning, there is a shroud of sadness surrounding Maisie. One of her first cases – an apparently straightforward case of a possibly philandering wife – leads her into investigating the legacies, the scars – both those arrestingly and physically manifested and those deceptively hidden behind the smiles – of the war to end all wars. She starts poking around a privately run refuge for crippled veterans that has a disturbing pattern of deaths. And this investigation begins to scratch at her own scars, cracking open memories of her life before and during The Great War.

We learn that she comes from a working-class background, that her mother died when Maisie was just a young lass, that she has worked her way from maidservant to psychologist, that she has a patron in the form of Lady Rowan, her former boss, who recognized Maisie’s genius and has nurtured it through the years. And we learn that she knows loss, great loss, that she had a great love and it’s in the past tense now.

And there’s been a war, a terrible, bloody war.

It’s not too difficult to add these things up.

The poignancy of this post-war Britain, of this tale of love and loss between Maisie and her Simon, of the too many futures cut dramatically short, of the scars and scars and more scars, is simply tear-inducing. So, if you love a good cry every now and again, well, this book is for you.

No, Really, It’s Not Depressing

And if that all sounds terribly depressing, well, it’s not. It’s actually an incredibly hopeful book, about picking yourself up, dusting yourself off, putting yourself back together again as best you can and getting going – scars, holes, broken hearts, missing bits and all.

As Maisie’s mentor, Maurice Blanche, teaches her, “The story takes up space like a knot in a piece of wood. If the knot is removed, a hole remains. We must ask ourselves, how will this hole that we have opened be filled? The hole, Maisie, is our responsibility.”

None of us get through life without holes, so it is about how to treat these wounds, to bridge these gaps, to suture these cracks, to succor these sorrows, to live with these holes, and that is essentially what this lovely book is about – how to find joy and choose life after the devastation.

The book waxes philosophical at times. It ruminates on morality and humanity and truth, on justice and justness and plain ol’ right and wrong. However, it’s no action-packed whodunit. It’s not a light read, not an easy, quick read, hastily enjoyed and forgotten. Rather, it’s a profound read, a poignant and thoughtful read that lingers and percolates. It’s not gritty, cynical noir. Maisie is vulnerable and earnest and full of holes, trying to mend not just her own wounds but others’ as well. But she’s gettin’ on with it, choosing life, finding joy.

I will certainly choose to seek out more volumes with Maisie Dobbs.

This novel absolutely has the potential to be a great film and/or series. It’s character driven, so it would require a formidable young actress to give this character the necessary depth and gravitas.

Content Note: There is no graphic content (violence, sex, language), although there are descriptions of mangled bodies from battlefields.

Do you too love a good cry of a bittersweet romance and love lost?

Our romance-themed entertainment site is on a mission to help you find the best period dramas, romance movies, TV shows, and books. Other topics include Jane Austen, Classic Hollywood, TV Couples, Fairy Tales, Romantic Living, Romanticism, and more. We’re damsels not in distress fighting for the all-new optimistic Romantic Revolution. Join us and subscribe. For more information, see our About, Old-Fashioned Romance 101, Modern Romanticism 101, and Romantic Living 101.
Pin this article to read later! And make sure to follow us on Pinterest.
By Jessica Jørgensen on May 22nd, 2017