Sometimes you press “play” on a film you’ve recorded on DVR not knowing what to expect – other than hoping for a good story. This was my experience with Love at First Dance, a Hallmark Channel original.

The story introduces us to Hope (Becca Tobin), a talented choreographer who’s in the midst of reinventing her future. Currently, she works as a dance instructor. This is work she enjoys but she questions if it’s what she’s meant to do. For now, though, her work includes many a happy moment as she’s one of the city’s most sought-after “first dance” choreographers.

This is how she meets Eric (Niall Matter). A meeting that leaves anything but a good impression. You see, Eric is wealthy and considered one of the most eligible bachelors. Two qualifiers that leave Hope unimpressed. But her one-time meeting of Eric is not to be when she discovers Eric and his fiancée, Adriana, are her latest clients.

With each new Hallmark film, I’ll confess, I go into most of them with some sort of preconceived feelings. Sometimes it’s positive. Sometimes it’s more of a negative response because of the story or perhaps the cast. With this one, the promotional spot speaks exactly to the sort of movie I want from this network. In fact, this one is the one original I was most anticipating during Hallmark’s “wedding” movies. Turns out, the writers and cast don’t disappoint in this ‘first dance’ romance sure to make us swoon. 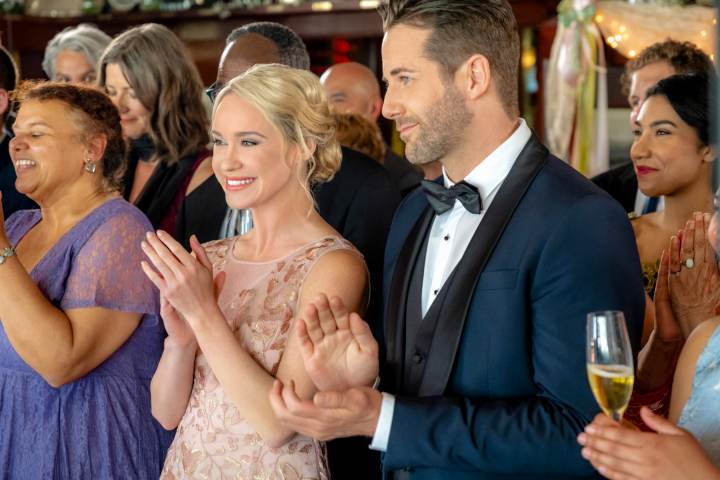 There is something about a film that centers on dance that appeals to the romantic in me. So much so that I like to write lists on favorite first dances from films or TV shows. The moment between a couple in a first dance can be quiet and romantic or magnetic and romantic, but no matter what form it takes, magic happens. This is why the idea of this film so speaks to me. Penned by Nina Weinman, this writer is no stranger to Hallmark films. On her resume is Operation Christmas which is one of my favorite films of the season. Also, Pumpkin Pie Wars is adorable which is also one of Nina’s credits.

RELATED  | Our New Manifesto: How to Live a More Imaginative, Romantic Life

Though she’s not been in many Hallmark films (this is her second, I believe), Becca Tobin is lovely in this role. She and Niall (a Hallmark leading man who’s fast become a viewer favorite) have a nice, gentle chemistry that keeps the viewer invested in their love story. Whether they’re dancing together in a fountain (a perfect and swoony scene for the romantic in us) or bartering who should receive backstage access, they’re cute together.

Anyone who enjoys the types of old-fashioned storytelling this network promotes will enjoy Love At First Dance. The chemistry is present from first meeting to the final dance, and it’s a story that delights those of us who appreciate the charms of old-fashioned romance.

Content Note: As is the signature of this network, Love At First Dance contains nothing offensive. TV-PG is Love at First Dance‘s rating.

Where to Watch: Keep an eye on your local Hallmark Channel listings for possible re-airs.

Our romance-themed entertainment site is on a mission to help you find the best period dramas, romance movies, TV shows, and books. Other topics include Jane Austen, Classic Hollywood, TV Couples, Fairy Tales, Romantic Living, Romanticism, and more. We’re damsels not in distress fighting for the all-new optimistic Romantic Revolution. Join us and subscribe. For more information, see our About, Old-Fashioned Romance 101, Modern Romanticism 101, and Romantic Living 101.
Want to help us spread the popularity of Romance in Entertainment? Share this page with your friends!
By Rissi JC on August 22nd, 2018