At the time, the social media scene was alight with anticipation for each new installment. And while numerous bookworm friends were gushing over this web series (spun off of Jane Austen’s Pride and Prejudice), I abstained. Months went by and still, I refused to be sucked into that pop culture vortex. And, in fact, it wasn’t until months after that first installment until finally, I caved. I hit the big red arrow button on its Youtube channel and settled in for the first installment of The Lizzie Bennet Diaries.

Needless to say, I loved it.

Today in commemoration of those five years, I’m sharing five reasons why we still need this series, and in general, reasons why I miss it (which translates into reasons why it should reemerge).

There are so many reasons why this kind of entertainment should still be making us laugh. Not the least of which is its pop culture relevance. Youtubing, Youtubers, vlogging (the collaboration of blogging and videoing, or a kind of video diary) and all of that jazz is still on trend. The other reason is audience’s general adoration of all things Jane Austen and those impossibly high-standard men she created.

As I prepped this list, I engaged in the task of rewatching an episode here and there. A tough task indeed, but let me tell you, someone has to do it. I volunteer as tribute. Here are five reasons why this series still has a hold on my fangirl heart (and even one flaw).

Considering these are based on characters created by Jane Austen, it’s a given they’d be likable, right? Well, of course, any interpretation runs the risk of messing up the beloved characters. Even with the concessions made for the format and era, these characters suffer no such fate. They’re likable with flaws and imperfections an audience can relate to.

The humorous “improv” sequences involving Lizzie and one or both of her sisters, is a guaranteed “funny bone” tickler. Whether she’s recreating conversations with her mother (that ridiculous hat though!) or recounting the infamous “she’s tolerable, I suppose” conversation with Darcy, they’re entertainment gold.

OK, so I realize I already mentioned the characters, but I mean, of course, I had to mention Darcy all by himself. Daniel Gordh is fantastic in this format and this contemporary version, as are he and Lizzie (or “Dizzie” as they are known) together. The only real flaw in the character? He doesn’t appear until episode 59 (out of 100 episodes and by the Youtube playlist numbers) and even then, he only appears in 11 additional episodes. No Mr. Darcy character should be seen this little. 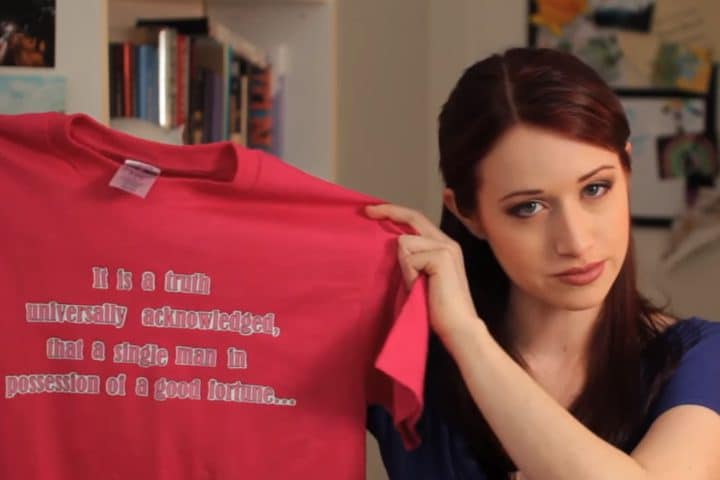 The use of original material, even in colloquialism, is fantastic. The way the writer’s work celebrated phrases or nods to Pride and Prejudice fangirl, is so clever. Whether it’s the Colin Firth mentions or that famous first line (see above photo), the classic literature and pop culture nods match each other in an effortless manner.

In today’s changing TV landscape, a story with threads of humor is becoming rare. This is why something like The Lizzie Bennet Diaries is something we still “need.” Plus, it doesn’t hurt that they run 3-5 minutes (on average) and are totally binge-able. Before I realize it, I’ve watched 10, and it still doesn’t feel like “too many.”

Content Note: There is some adult material within the series, some episodes would earn a TV-PG rating, while others would deserve the higher TV-14 tag.

In celebration of its anniversary, you can watch the entire run of The Lizzie Bennet Diaries on Youtube.

Did you watch The Lizzie Bennet Diaries? What did you like best about it? Do you miss it? Tell me all of your fondest LBD memories down in the comment section below!

Our romance-themed entertainment site is on a mission to help you find the best period dramas, romance movies, TV shows, and books. Other topics include Jane Austen, Classic Hollywood, TV Couples, Fairy Tales, Romantic Living, Romanticism, and more. We’re damsels not in distress fighting for the all-new optimistic Romantic Revolution. Join us and subscribe. For more information, see our About, Old-Fashioned Romance 101, Modern Romanticism 101, and Romantic Living 101.
By Rissi JC on March 28th, 2018