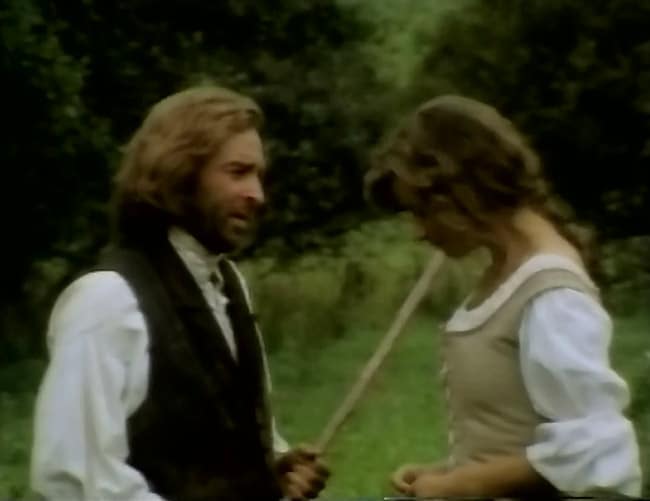 The Moment: Kester comes to thank Prue for saving his life.

In Precious Bane, Prue Sarn saw Kester Woodseaves for the first time at her friend Jancis’ love spinning and fell for him almost immediately. But due to Prue’s hare lip, she believes herself unlovable and hides from him, loving him from afar. One day at the market, she witnesses Kester try and stop the bull baiting; the practice of setting trained dogs on a bull or a bear for blood sport. Prue has the strangest feeling, ‘as if I were his angel for that day’ and stays close, sensing that things could go awry.

The village folk are angered at his interference and want their sport. Kester unsuccessfully tries several ways to get the baiting to stop. Finally, one of them proposes that Kester takes the bull’s place. It is meant as a joke but Kester takes up the offer.

Kester Woodseaves: if … I agree to … take on the dogs one by one, not to kill them but to put them on chain with naught but my bare hands … if I do this at my own risk, will ye give it to me in writing as there wuuna be another baiting in Lullingford for ten years? And if I failed to put any dog on chain, I’ve lost and the baiting goes on.

Prue, afraid for Kester’s life, steals a carving knife which she hides under her skirt. At first, all goes well. Kester manages to chain up each of the dogs with little trouble. As weaver, he had visited the farms and made friends with the dogs in the past. Prue knows that one of the dogs is new and bad tempered so she runs to fetch the apothecary. As expected, the final dog turns on him, seizing him by the throat. The owner won’t call the dog off.

‘I rushed forrard, I, that had never willfully hurt any living creature, and as the great beast had reared with his teeth in my master’s throat, I ran him through the heart.’

She pulls the dog off and holds Kester in her arms as the apothecary cauterises the wound.

Prue Sarn: There, there my dear. None shall touch you now.

She faints and later learns Kester has been taken to the Callards farm to heal.  It is close to the farm where Jancis, Prue’s friend and her brother’s betrothed, has been sent to work.  Since neither Jancis’ nor Gideon can write it falls to Prue and Kester to write the letters that pass between them. Prue slips in a few indirect, caring comments of her own knowing that it will be Kester who will read the letter to Jancis. It is some time later after Jancis has run away from the far. Prue is collecting rushes for besoms and pondering on the life of dragonflies when Kester finds her by the mere.  And she tries to run away.

Kester: What? Oot run away?  Why, Prue Sarn? 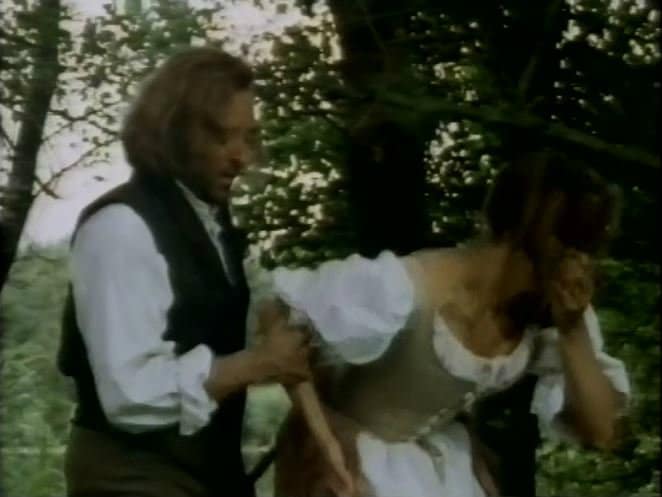 She tries to get away again but is trapped; she instead opts to cover her face.

Kester:  I do think (‘in the voice that made it sound summer’) that it be a very funny way to treat a chap as comes to thank ye kindly for saving of his life, Prue Sarn, to take off … and try to jump in the lake!

Feeling terribly shy, Prue can only hang her head.

Kester: What were you looking at when I came?

Prue: The damsel fly, coming out of its shroud.

They watch dragonflies emerging from their cocoons by the mere. 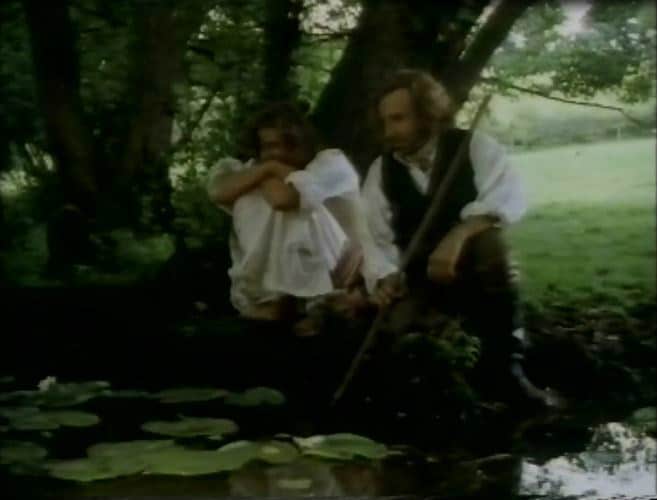 Kester: It costs a deal to get free. But once free, they never fold their wings.

Prue: Some of em’ go so high, I think, times, they might flitter right into heaven.

Kester: We’d all like to do that, I’ll be bound, if we could choose our heaven. And I’d like my heaven afore I die.

Prue: And what ud it be?

Prue for a moment forgets her shyness and in curiosity looks up at him. 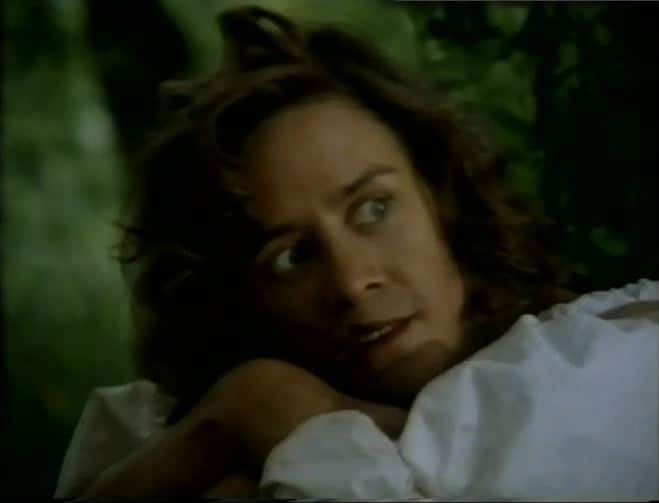 Kester: I’m not quite sure yet but come a year, maybe, I’ll know.

She gently mocks him.

Prue Sarn: There’s a long while, to be hiver hovering, choosing your bit of paradise.

Kester: Could you think of yours sooner, Prue Sarn?

‘I looked at his green coat…I fixed on a place on the left side, just betwixt the sleeve of it and the breast of it where I’d lief lay my head and I said.’

Prue: Ah, I’ve thought of mine. 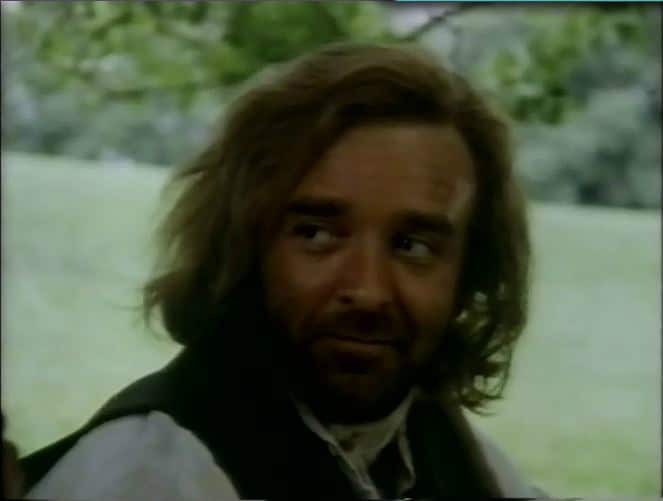 Prue: I said as I’d thought of it, Mr. Woodseaves.  But my thoughts be my own.

Kester: You can write a dommed good letter Prue.

Prue: They were Gideon’s letters. 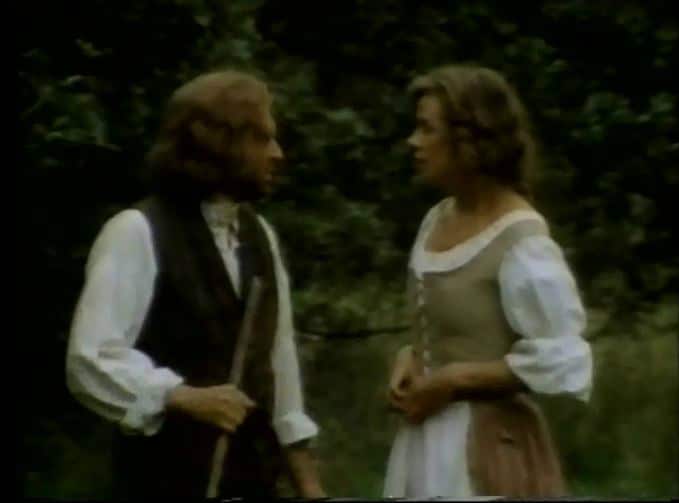 He knows the truth but chooses to tease her into admitting it.

Kester: I take it very kind of Sarn to tell me to change my stockings when they be wet.  It inna often you find a man as thinks of such things, and Sarn least of all, I’d have said.  And the sewing work, and the damson cheese and the pickle at half market price, well, I tell you, it fairly bowled me over, for I had heard Sarn was a hard man.  And then for him to offer me those victuals!  I must have misjudged the chap cruel.

Prue tries to suggest that Jancis was the one to write the last letter as she had run away by that point.

Kester: Oh, yes, so it was.  I liked that letter.  A very nice girl, that. (Quoting the letter) ‘I be more choice of him I love than of all else in the world beside’. That’s a woman worth summat to a fellow and ‘I love him past telling, and shall to the end’ and in especial that’n about ‘spend my life anytime very willing, and die for you by bite of dog … my dear.’ I liked that.

Kester: I’m coming to Sarn’s love-carriage, and I’ll be bound to thank him for his kind thoughts about the sewing and the damson cheese and pickle.

Knowing her brother will be angry if he finds out, Prue is quick to respond.

Kester: There’s a grudging girl, not wanting her brother to be thanked.

He gives her a look that says he knows all and was just waiting for her to admit it.

Kester: Well, it’s no use… You wrote the letters.  And all I can say is, the chap you were thinking of when you said the things you did say is a lucky chap, whoever he is.

She is quick to tell him she doesn’t have a fancy man.

Prue: I hanna got an acquaintance. 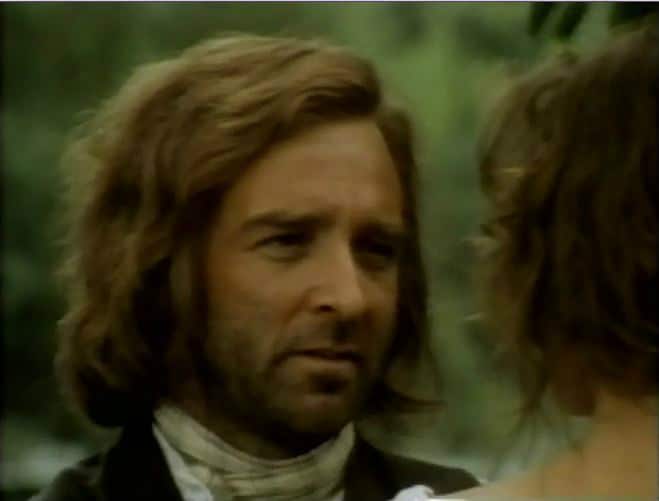 Kester: Dear me!  That’s pity, to my mind.  But anyway, you’ve got a friend.  You write in your book, when you go back, that Kester Woodseaves is your friend till Time stops. 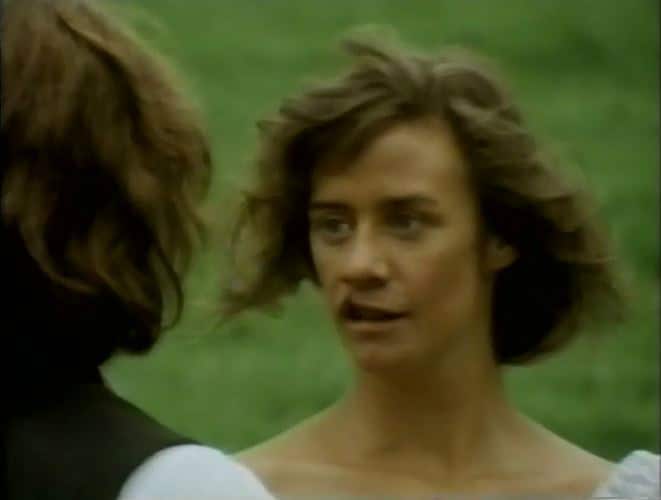 She thanks him very kindly and asks him how he knew about her book.

Prue: But how did you get to know all the other things you do seem to know about me?

Kester: Well there’s a tuthree people know you, Prue.  And there’s few know you and dunna love you.  And I expect I’ve been leasing in their hearts of it.  And I think there’s not much that I dunna know about you, Prue.

‘There was rest in that saying.  And oh, the summer in his voice, then and always.  I forgot the time and all.’  They begin to walk back.  After a while Kester speaks again.

Kester: There’s a thing I’m bound to ask you. What for did you do all you did for me that day at the baiting?  What for did you stand above me with the knife, and run to Lullingford and all, to save me?

There is a deep silence.

Prue: Why, it was only that I was your angel for that day.  A poor daggly angel, too.

They come to where they must part ways. Kester: If you’re ever wanting an angel’s situation, you can send to me for a written character.

She remarks that his eyes are serious despite his joking manner. They say their goodbyes. He smiles as he begins to walk away but looks back. 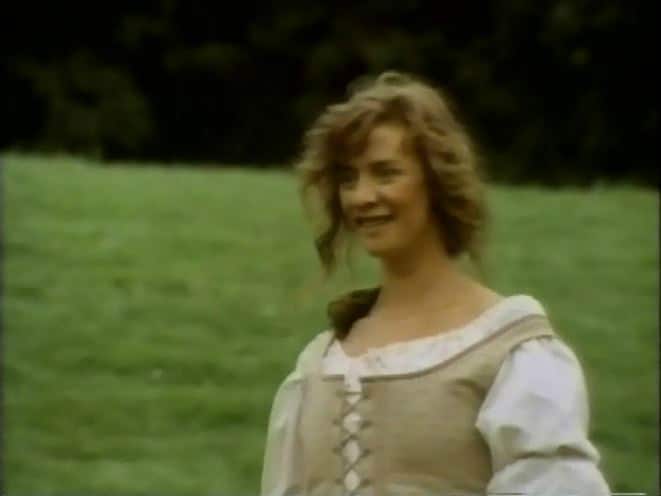 Kester:  Not so daggly, neither.

He walks away laughing, into the wood.

What did you think of this moment from Precious Bane? Would it convince you to pick up a copy of the book and see the romance firsthand?

Our romance-themed entertainment site is on a mission to help you find the best period dramas, romance movies, TV shows, and books. Other topics include Jane Austen, Classic Hollywood, TV Couples, Fairy Tales, Romantic Living, Romanticism, and more. We’re damsels not in distress fighting for the all-new optimistic Romantic Revolution. Join us and subscribe. For more information, see our About, Old-Fashioned Romance 101, Modern Romanticism 101, and Romantic Living 101.
Pin this article to read later! And make sure to follow us on Pinterest.
By Elinor Cackett on February 19th, 2016