Truth be told, I did not think I was going to make it through Lion. Not five minutes in, I was sobbing. Lion is a film that makes you ache from beginning to end as you follow Saroo from childhood to adulthood and then back again.

While waiting for his brother, five-year-old Saroo falls asleep on an empty train and wakes to discover it is traveling across India. After thousands of miles, Saroo lands in Calcutta. Confused and too young to explain what happened, Saroo survives on the streets for two months. After a stranger discovers him in the streets, the authorities place Saroo in an orphanage until adopted by a couple in Australia. Twenty-five years later, Saroo’s memories to his earlier life revive unexpectedly. Realizing that as a child he was lost, he begins searching for his family. What follows is the deconstruction and rebuilding of an incredibly determined young man.

In his directorial debut, Garth Davis sinks his hooks deeply into your heart. He challenges the traditional notion of family and identity through his lead character’s emotional journey of rediscovery. Based on the true life events of Saroo Brierley, Davis, along with screenwriter Luke Davies, elevate the genre cliché of an adopted man searching for his family, and turn it into something powerful. It is a contrast in privilege and poverty. However, it is also a study of family bonds, whether by blood or through choice. In addition, Lion shows us how deep familial love runs and how it survives in lost memories.

What makes Lion particularly heartbreaking is Saroo’s early life. From the beginning, it is clear that this family loves one another deeply. Saroo’s older brother, Guddu, protects him in every way possible. He is gentle with Saroo and indulgent. The same is true of Saroo’s relationship with his mother. Saroo never felt unloved or unwanted. Thus, when he finds himself lost in Calcutta, it is heart-wrenching.

Saroo roams around the train station, trying to get someone to understand. Yet, no one understands him. Saroo doesn’t speak Bengali, and no one understood his five-year-old Hindi. So, he wanders the streets for months, surviving on scraps and memories. Sunny Pawar melts your heart as he tries to survive. His dark eyes peer at the camera, desolation, and fear readily apparent.

What was particularly moving about Lion was Saroo’s breakdown. Twenty-five years after his adoption, we meet a happy, successful young man on the brink of his future. Raised in privilege, Saroo doesn’t identify with his Indian culture. When questioned about his ethnicity, it’s almost a throwaway comment from him. His memories of his time before his adoption are only of Calcutta. Saroo no longer remembers Guddu, his mother, the train and how he came to be in Calcutta. However, one evening while dining with new friends from India, the sight of an Indian delicacy triggers a memory. In that moment, he realizes he is not from Calcutta.

Dev Patel is utterly brilliant as Saroo. The emotional fallout as Saroo’s memories begins to surface plays out not only in words but in every expression. Patel masterfully conveys the emotional absence of Saroo. With only a handful of memories, Saroo’s task of finding his family is daunting. It begins to subsume him. Slowly, Saroo begins to isolate himself. Even when surrounded by family, he’s alone. His girlfriend, Lucy, feels his withdrawal keenly and attempts to bring him back. He tries but he cannot let it go.

Lion and the Memory of Family

Incredibly painful to watch is the guilt Saroo experiences for his privilege. The realization that his mother and brother never knew what happened to him tears him apart. At first, Saroo keeps that to himself and struggles to continue his life as before. Yet, he cannot escape from the thought of his family searching for him. That for twenty-five years, they screamed his name while he led a comfortable life. The guilt takes over and Saroo cannot take it anymore. He can’t pretend or return to the present.

“How every day my real brother screams my name?
Can you imagine the pain they must be in not knowing where I am?”

Saroo looses himself in his search, mapping train speeds, and stations. In those scenes where Saroo is haunting the internet or roaming the streets, Patel’s body language is masterful. From hunched shoulders to unkempt hair or the shimmer of tears as he spirals lower, Patel’s performance is devastating. The tearing down of everything that is Saroo does not stop at the physical. Each failure ratchets up the despondency. He eats alone, walks the streets alone, and by choice, loses contact with everyone, including his Australian family. The confident Saroo we met earlier is gone. Instead, he is a shell of that young man. 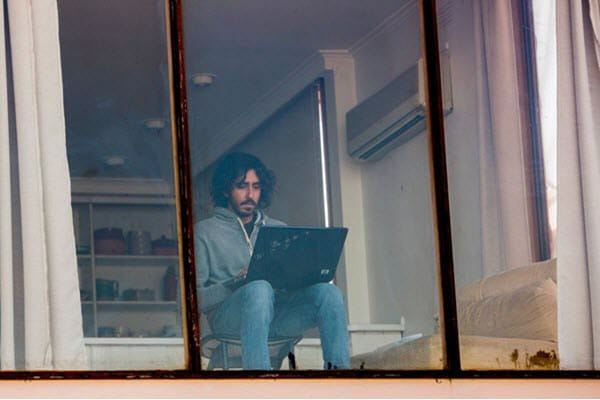 Flashbacks of Guddu especially torment Saroo. Their connection, and the care Guddu took of Saroo at such a young age, was all the more tragic for its tenderness. Saroo’s memory of his relationship with Guddu is at odds with the relationship he has with Mantosh, his adopted brother. Also adopted from India, Mantosh did not escape his time in a Calcutta orphanage unscathed. As a result, he is mentally unstable. This is probably the only fault I can find with Lion. There were mere hints of the nature Saroo and Mantosh’s relationship. I would have liked to see more and how Saroo’s relationships with both brothers added to his emotional state.

Related Post: Love Finds You in Charm – A Journey of Faith, Family and Self Discovery

Lion is heart-rending. From Saroo’s seemingly futile search to the lost connection with his adoptive mother, it examines the idea of family in the non-traditional sense of the word. I recommend settling in with a box of tissues or two. On second thought, better make it three!

Where to Watch: It is available to stream on Netflix. You can also rent the film on various online streaming services (Amazon, Vudu, etc.) and buy on DVD.

Content Warning: Rated PG-13 for thematic material and some sensuality.

Have you seen Lion? What are your thoughts on this award winning film?

Our romance-themed entertainment site is on a mission to help you find the best period dramas, romance movies, TV shows, and books. Other topics include Jane Austen, Classic Hollywood, TV Couples, Fairy Tales, Romantic Living, Romanticism, and more. We’re damsels not in distress fighting for the all-new optimistic Romantic Revolution. Join us and subscribe. For more information, see our About, Old-Fashioned Romance 101, Modern Romanticism 101, and Romantic Living 101.
Pin this article to read later! And make sure to follow us on Pinterest.
By Catherine on July 20th, 2017