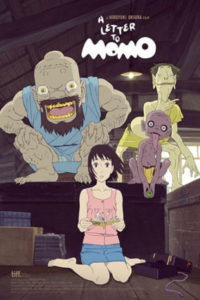 A Letter to Momo is a Japanese anime film from 2011, written and directed by Hiroyuki Okiura, developed by Production I.G. and distributed by Kadokawa Pictures. It is not a Studio Ghibli film of the famed Hayao Miyazaki, but it is of the same genre.

Serenity, stillness, attention to details, poignancy, fantastical worlds, strong female lead – yeah, many of the elements to expect in a Miyazaki film are amply present here. So, for fans of Studio Ghibli and the great master, Miyazaki, this is definitely a film to see. It’s no masterpiece, but it is beautifully animated, with a compelling story that draws you in. Simply put, a little girl has lost her dad and lost her way.

Momo is an 11-year-old girl, a tween, who is betwixt and between, on the cusp of adolescence. Furthering her betwixt and betweenness is the newness, the rawness, of this life after the recent loss of her father. Momo’s mother has opted to uproot their former lives in Tokyo and return to the familiar isle of her own youth, Shio. And from this familiar base, in the bosom of her relatives, Momo’s mother embarks on a new beginning for herself, heading back to school to study nursing. All of this has left Momo numbly drifting. While this island and its people and its places are known to her mother, it is all foreign to her.

Momo clings to an unfinished letter from her departed father, a letter that he only got so far as to write, “Dear Momo.” Numbly, Momo goes through the motions of life, drifting along, exploring her new surroundings, dismissing many offers of friendship. She is there, but not really living. 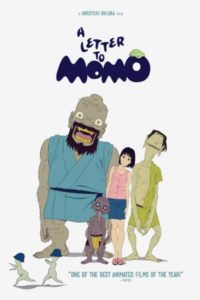 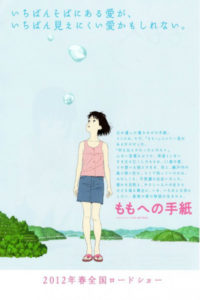 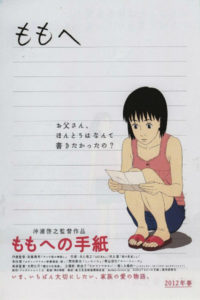 Thumps in the Attic

And then the thumps in the attic of the old family home start, alarming her. Local fields are raided, goods pilfered, the fridge emptied. Something or someone is afoot. And, as it turns out, Momo is the only one who apparently can see them – these impish spirits, who are more ghoulish than cute. There are three of them, and they are grotesque and crude and rude and just plain incorrigible. And they’ve attached themselves to Momo.

Their pilfered wares are piling up in her attic and, as no one else can see these ghouls, Momo is taking the blame. She attempts to clean up their many messes and get them to behave properly, but to no avail. They pester and plague her, irritate her, frustrate her, anger her. She screams, she cries, she embarks on adventures, she laughs. She begins to feel again. As the numbness begins to fade, Momo begins to look around, beyond her own pain, rejoice in beauty and recognize her own mother’s sorrows and fears. She begins to sift through memories and forgive her mother, her father and herself.

There’s one final, splendid and daring adventure, which I won’t reveal, that left my son squealing in delight. With some fantastic animation sequences, I might add.

And when A Letter to Momo ended, my young son turned to me and said something to the effect, “Remember that time when I said that I couldn’t do it? But you said to try. So I did. And I could do it.”

Yup, if ever there was an apt summing up of the moral of this beautiful movie, it’s that. It’s about trying, daring yourself to take the plunge, being open and vulnerable enough to feel life, and meeting and greeting the changes and challenges that life will always and inevitably throw at you.

Where to Watch: DVD, Amazon Video.

Our romance-themed entertainment site is on a mission to help you find the best period dramas, romance movies, TV shows, and books. Other topics include Jane Austen, Classic Hollywood, TV Couples, Fairy Tales, Romantic Living, Romanticism, and more. We’re damsels not in distress fighting for the all-new optimistic Romantic Revolution. Join us and subscribe. For more information, see our About, Old-Fashioned Romance 101, Modern Romanticism 101, and Romantic Living 101.
Pin this article to read later! And make sure to follow us on Pinterest.
By Jessica Jørgensen on August 11th, 2017