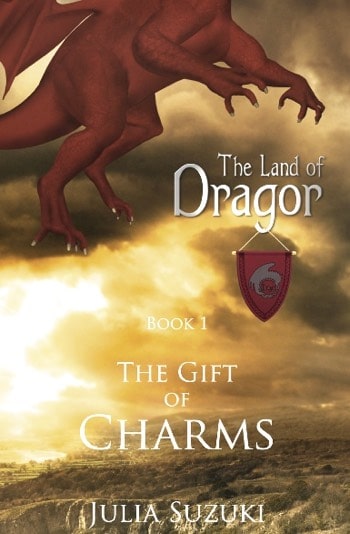 Julia Suzuki’s Award Winning ‘Land of Dragor’ series will entrance readers of any age. The Gift of Charms, the first volume of Julia Suzuki’s series is an epic fantasy story set to enchant and entertain…
In a secret land, far away from the habitation of man, dwell the world’s remaining dragons — hoping the dragsaur beasts have vanished forever. Here they try to live their daily lives, but all is not well and their talents are fading.
Things change, however, when, from a strange egg, Yoshiko is born – a dragon with a unique destiny.
Great adventure lies ahead as many challenges must be overcome, leading to a dangerous mission to the human world in attempt to return to the clans their missing magic!
Can Yoshiko make it in time?

This is the first novel in Julia Suzuki’s enchanting Land of Dragor series, and, I must say, it is a fabulous start. Suzuki transports her readers to the magical world of Dragor, a land where seven dragon clans live hidden from the humans who would choose to enslave them. Right off the bat I was sucked in by the surreal descriptions of Dragor and it’s almost ethereal landscape. Suzuki is a magician with words, and you feel as if you can actually smell the grass under your feet or the wind beneath your wings as she entices your mind into entering her fictional world. The descriptions were vivid and tangible, making it very easy for me to jump right into the story of the young dragon Yoshiko.

Yoshiko’s story begins with his birth and almost immediate kidnapping. The poor mite is barely brought into the world before someone decides he is different, cursed, and must be taken away from his clan. Thankfully, this crisis is averted and Yoshiko is allowed to stay with his family, but right away we can see that life will likely not be too easy for him. What do we find out next? Well, Yoshiko is the unfortunate victim of bullying in dragon school. His nemesis Igorr taunts him endlessly for being different, boasting that his clan is far superior to Yoshiko’s. Yoshiko, not being the most aggressive of lads, puts up with this bullying for a time. However, one day after he’s finally withstood all the bullying he can, he runs off alone to escape.

By accident or perhaps fate he ends up in the forbidden mountain. There he meets an older dragon named Guya, who helps him conquer his fears and insecurities, acting as a kind of mentor.

I appreciated the message against bullying in this part of the story. The message Suzuki sends to children reading this book centers around the idea that being different is not a bad thing. Yoshiko eventually stands out amongst his fellow dragons, appreciating his differences and not trying to follow the herd. I know that bullying is a big issue for kids in school today, not to mention for adults as well, although it may be subtler. Dealing with it in a positive manner, as Suzuki does in her novel, helps to shed light on the issue and increase understanding and hope. I think that is one thing that makes this book a great read.

Yoshiko’s meeting Guya is the catalyst that changes his life. Yoshiko finds the strength to resist Igorr’s bullying and become a strong and unique individual. At this time he also begins training with one of the most skilled and revered Dragon Guard. As I don’t want to ruin the surprise I shall leave you with the knowledge that he is training for an adventure that will change not only his life, but also the lives of all dragons. I absolutely loved this book, and would recommend it to anyone, regardless of age. Suzuki beautifully brings this magical world to life, not only in her description of the land itself, but in the stories of the dragons and their clans as well. Suzuki creates a well-rounded mythology in her novel, giving each clan their own past and unique character, as well as a history with the humans who want to enslave them.

I could actually see this turning into a really great kids television show on Disney or Nickelodeon. The series format really lends itself to that serial style. I think it would end up being a great hit as a cartoon.

Our romance-themed entertainment site is on a mission to help you find the best period dramas, romance movies, TV shows, and books. Other topics include Jane Austen, Classic Hollywood, TV Couples, Fairy Tales, Romantic Living, Romanticism, and more. We’re damsels not in distress fighting for the all-new optimistic Romantic Revolution. Join us and subscribe. For more information, see our About, Old-Fashioned Romance 101, Modern Romanticism 101, and Romantic Living 101.
Pin this article to read later! And make sure to follow us on Pinterest.
By Rebecca Lane on November 7th, 2014