Hello to all of you at The Silver Petticoat Review, and thank you so much for letting the I Could Write a Book blog tour make a stop here!

I Could Write a Book is a modern adaptation of Emma by Jane Austen, and of course, any story about Emma Woodhouse and George Knightley must have that delicious push and pull between their strong personalities. They always manage to patch up their disagreements and stay friends though.

Today’s excerpt is about one of those times. George and Emma have disagreed at a Christmas Party, and he has come over later with his version of a peace offering…

I Could Write a Book Excerpt 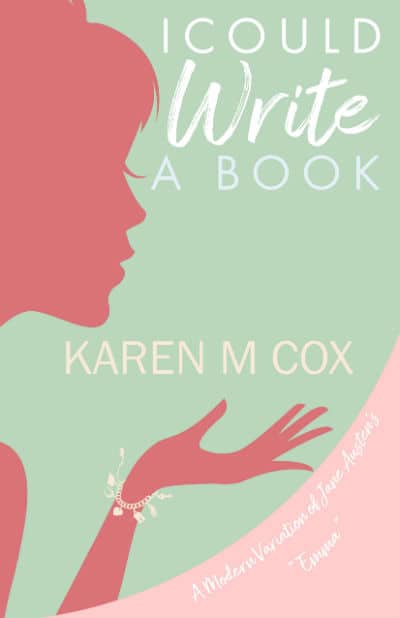 “George!” She came bounding down the stairs, rounding the newel at the foot of them and clearing the last step with a little hop. She had on blue jeans and one of those flimsy, gauzy tops you could practically see through. “Well, hello there! What are you doing here?”

“Came by to visit your dad—and you, of course. If I’m welcome.”

She sauntered to him with a smile and linked her arm in his. The smell of honeysuckle drifted over him, and he relaxed.

“Handsome fellows are always welcome at Hartfield Road,” she said, leading him toward the parlor.

He halted, causing her to turn around and face him. “I also wanted to make amends—for the other night.”

She waved him off with her free hand. “Oh, you were just being you, Professor Knightley. I’d forgotten all about it.”

Her eyes flitted downward, indicating that might not be the absolute truth, but there was also friendliness in her manner, and he knew that was genuine. She would forgive him, although forgetting might take time.

“So, to help make amends, I brought you a present—a gift of goodwill.”

Her eyes lit up. “Oooh, I love presents! Although, they say ‘beware of Trojans bearing gifts’— but I’m sure you wouldn’t bring a wooden horse. Where is it?” She leaned around to look behind him.

“It’s out on the front porch.”

She bounded toward the door, laughing. “Maybe it is a horse, after all.”

“I need to explain first.”

She crossed her arms and frowned. “Okay…”

“It is a gift, Emma Kate, but I don’t want you to feel obligated to take it.”

“It’s, well…maybe I should just show you. But remember, if you don’t want to keep it, all you have to do is say so.”

“The suspense is killing me! Will you just show me the present already?”

He stepped outside and returned a second later, carrying a big box. It clunked from side to side, held high enough that she couldn’t see into it. He set it on the foyer floor and lifted the lid. His hands disappeared inside, and a little yelp was heard as he drew the golden bundle out of the box.

Emma reached out her arms for the wriggling, tail-wagging ball of fur. “Aren’t you the prettiest little thing? Oh, look! She likes me!”

He laughed as the pup leaned up and licked Emma’s face. “Well, of course she does. Everyone likes Miss Emma Woodhouse.”

Emma held the pup, crooning to her in soft tones, like one might use with a baby.

“She’s to keep you company, when your dad is resting, or when you go outside, and he doesn’t want to go with you. I know how you love the outdoors.”

He waited a minute, watching while Emma played with the dog. “Do you like her, Emma? Would you like to keep her? It’s not a bit of a problem to take her back, if you don’t think—”

“Take her back? Absolutely not! She’s adorable. Thank you, George!” She buried her nose in the soft fur. “I love her already.” Emma set her down on the floor and watched her walk around in a circle before letting out a bark.

“What will you name her?” 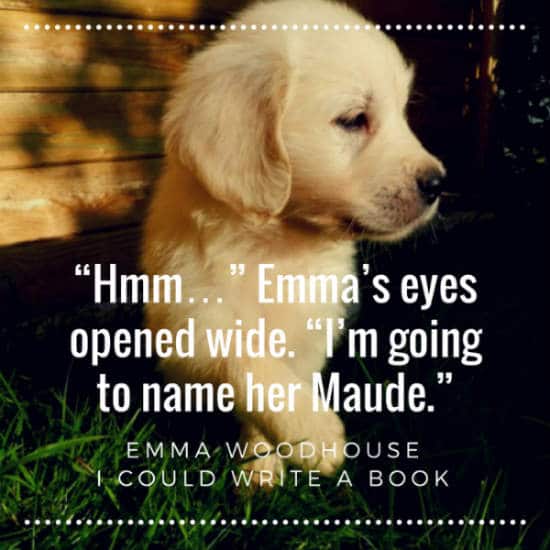 As if in reply to his derogatory statement regarding her new name, Maude came over and promptly wet on his wing-tips.

“It is not an odd name!” She snatched up her puppy. “Don’t listen to him, Maude. He has no idea how to talk to ladies.”

Mrs. Davies came hurrying in. “What was that noise? It sounded like a…” She did a double take at the dog in Emma’s arms. “Mr. Knightley, you didn’t!”

“He surely did, Mrs. D. Meet Maude, our newest family member. And fetch a towel, if you don’t mind. Our new family member just tinkled on Mr. Knightley’s shoe.”

Mrs. Davies pursed her lips and frowned at George as she hurried off to get the towel, muttering something about “more work” and “shoes” and “serving you right.”

“I’ve got all her paraphernalia in the car. Bed, leash, food, water dish. She’s all scheduled for shots at the vet and for obedience training when she’s old enough.”

“You thought of everything.”

He shook his foot. “Everything but an extra pair of shoes.”

Emma laughed and gave Maude a gentle squeeze, making the pup let out an excited yelp.

Thus began Jane Austen’s classic, a light and lively tale set in an English village two hundred years ago. Yet every era has its share of Emmas: young women trying to find themselves in their own corners of the world.

I Could Write a Book is the story of a self-proclaimed modern woman: Emma Katherine Woodhouse, a 1970s co-ed whose life is pleasant, ordered and predictable, if a bit confining.

Her friend George Knightley is a man of the world who has come home to fulfill his destiny: run his father’s thriving law practice and oversee the sprawling Donwell Farms, his family legacy in Central Kentucky horse country.

Since childhood, George’s and Emma’s lives have meshed and separated time and again. But now they’re adults with grown-up challenges and obligations. As Emma orchestrates life in quaint Highbury, George becomes less amused with her antics and struggles with a growing attraction to the young woman she’s become.

Rich with humor, poignancy and the camaraderie of life in a small, Southern town, I Could Write a Book is a coming of age romance with side helpings of self-discovery, friendship, and finding true love in the most unlikely places.

Kindle US: “I Could Write a Book” Amazon Kindle 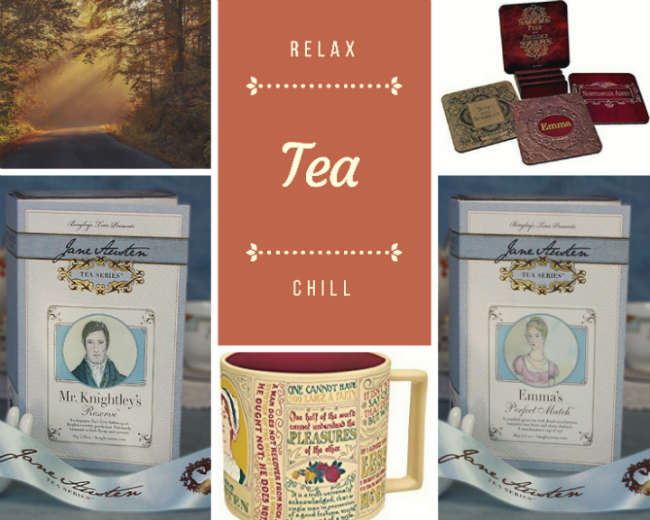 Karen Cox has set up a Rafflecopter for two winners. One winner will receive The Tea Pack: JA mug, Mr. Knightley & Emma teas from Bingley’s teas, and a set of Jane Austen coasters. 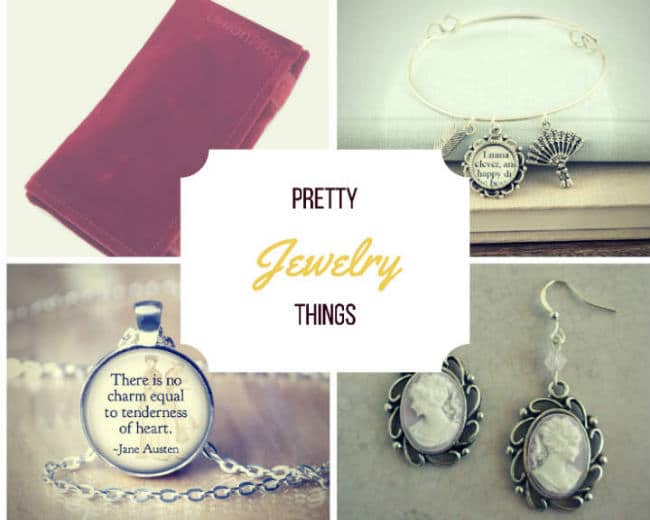 The second winner will receive a Jewelry Pack, which contains a Little Emma charm on a necklace, Regency cameo earrings, Emma Bangle Bracelet, and a Jewelry Roll.  These giveaways are open internationally.
a Rafflecopter giveaway

The giveaway ends on October 7th and the winners will be announced through the Rafflecopter widget on participating blogs.

Karen M Cox is an award-winning author of novels accented with romance and history, including 1932 and its companion ebook novella The Journey Home, and the novels Find Wonder in All Things and Undeceived. She also contributed a short story, “Northanger Revisited 2015”, to the anthology, Sun-Kissed: Effusions of Summer, and a story titled, “I, Darcy” to The Darcy Monologues.

RELATED The Darcy Monologues: New Twists on a Favorite Romance

Karen was born in Everett WA, which was the result of coming into the world as the daughter of a United States Air Force Officer. She had a nomadic childhood, with stints in North Dakota, Tennessee and New York State before finally settling in her family’s home state of Kentucky at the age of eleven. She lives in a quiet little town with her husband, where she works as a pediatric speech pathologist, encourages her children, and spoils her granddaughter.

If you would like bits of authorly goodness in your inbox once a month (updates, sales, book recommendations, etc.) sign up for News & Muse Letter

By The Silver Petticoat Review on September 23rd, 2017