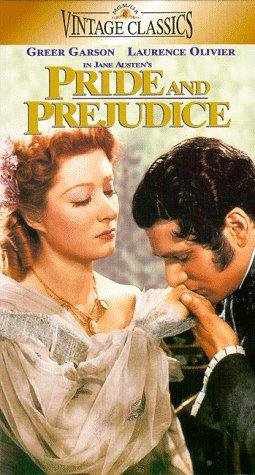 Well, apparently I’m finding it harder to watch classic movies than I thought I would. Pride and Prejudice has just been sitting idly by, with me glancing at it every so often and putting off actually watching it. But, this week I finally made myself sit down and play the thing. I must admit that I didn’t like it as much as I liked Rebecca. However, I think that may be partly because I’ve been spoiled with the BBC version starring Colin Firth. And really, what else could possibly live up to that? It was amusing, though.

Once again, as the introductory music started, however, I cringed slightly at the lilting tones. I don’t know what it is about that music, but it just bugs the crap out of me. Maybe it’s because it reminds me of watching old movies with my great grandmother when I was younger. Now don’t misunderstand, I love my great grandmother, but her house was seriously creepy. And the old movies just seemed to cement it’s place in time as something from a bygone era. I always thought I would see ghosts when I went to visit her, and the high vaulted ceilings made of dark wood just increased that eerie atmosphere. Maybe old movies make me think of death in that regard, as my great grandmother and her old house are both gone from my life.

But, moving on, I found I enjoyed Laurence Olivier as Mr. Darcy. He is devilishly handsome, which helps. I think I should like to see more movies with his aristocratic face in them. Oh, he wasn’t quite brooding enough for me, like Mr. Firth, but he was nonetheless entertaining to watch. He seemed more awkward in his interactions with others rather than haughty, especially in his dealings with Elizabeth. I quite enjoyed when he asked her to dance at one of the balls and she flatly turned him down. The look on his face was priceless. He seemed dumbfounded and completely uncertain of how he should react or what he aught to do next.

His performance when he asked Elizabeth to marry him the first time was definitely a highlight. The scene came across much more funny between him and Elizabeth than it does in other versions. She certainly knew how to ruffle his feathers and strike him dumb. Their witty back and forth banter is something I found refreshing. It was kind of nice to see a more lighthearted and fun version of the story brought to life.

I also very much enjoyed Greer Garson’s performance. I liked her interpretation of Elizabeth, especially in the way it worked so well against Olivier’s performance. She always seemed to be silently laughing at the world around her, not letting such things as pompous young men get her down.

I would say she’s definitely a glass half full person. Again, the scene where Darcy tries to propose is most definitely my favorite in regards to her performance as well. The whole scene becomes almost farcical when she begins shoving his proposal back in his face. I feel like in other versions of the story, this scene is played out much more seriously, sometimes even feeling devastating. That is certainly not the case in the 1940’s version of Pride and Prejudice. A sense of levity and fun is maintained throughout the film.

This is particularly true when studying the Bennett family. The sisters are all over the top almost stereotypical versions of Austen’s characters. I noticed their acting was definitely bigger and more exaggerated than the acting in the newer versions of the story. It was almost like they were acting as if they were on a large stage rather than right in front of a camera. This Bennett family was definitely the most outgoing and gregarious, even the character of Mary Bennett. I was surprised to see her acting so comfortable among the large crowds at the balls.

One thing that bothered me somewhat was the choice for costumes. They were hardly historically accurate, and they took up so much space on the screen that I felt at times they were trying to take over the movie. Those dresses were monstrous, in size as well as looks (sorry if any of you like them).

Other than the costumes, the film itself also contained quite a lot of differences from the book. One change that felt really wrong to me was the confrontation between Lady Catherine de Bourgh and Elizabeth. The original novel has Lady Catherine threatening Elizabeth to not marry Darcy. She haughtily demands that Elizabeth promise to never marry him. However, in the 1940’s version this turns out to be a big hoax to test Elizabeth’s love and loyalty to Darcy. This completely changes the characterization of Lady Catherine. She is supposed to be this snobby aristocrat, who believes that the classes shouldn’t mix and that Elizabeth needs to stay in the class she was born in. This movie turns her into something completely opposite. She is transformed almost into a benevolent figure that is partly responsible for the pair’s happiness in marriage. I feel like this change takes away from the original message of the novel, the focus on these negative feelings keeping people apart for really no good reason. We lose that all-important idea of prejudice coming from the upper class, and Lady Catherine de Bourgh in particular for this example.

But, I shall let bygones be bygones, and focus on the positive aspects of this movie. As a final thought, despite the changes in the movie that I didn’t quite like, overall I really did enjoy the movie and the interaction between the different characters in particular. It’s no Colin Firth version, but it holds it’s own among the many interpretations that have been filmed over the years. I would watch it again.

Do you agree with my thoughts on this movie? Do you have any classic film you would like to suggest I watch? Sound off below…

Make sure to check out my first foray into old movies in my look at Alfred Hitchcock’s Rebecca.

Our romance-themed entertainment site is on a mission to help you find the best period dramas, romance movies, TV shows, and books. Other topics include Jane Austen, Classic Hollywood, TV Couples, Fairy Tales, Romantic Living, Romanticism, and more. We’re damsels not in distress fighting for the all-new optimistic Romantic Revolution. Join us and subscribe. For more information, see our About, Old-Fashioned Romance 101, Modern Romanticism 101, and Romantic Living 101.
Pin this article to read later! And make sure to follow us on Pinterest.
By Rebecca Lane on November 6th, 2014