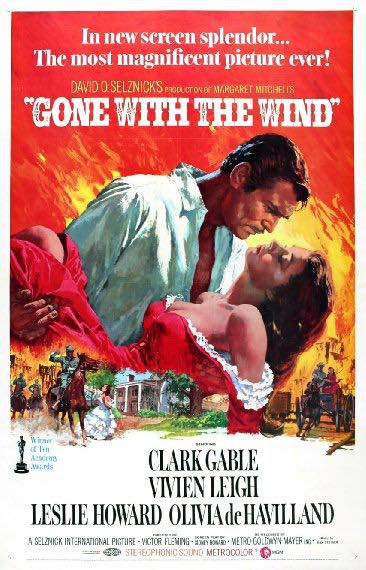 Scarlett O’Hara is no saint. That’s for certain. She’s selfish, vain, and unbelievably rude to her peers. The woman has no concept of doing anything charitable or for the good of someone else. She single-mindedly goes after what she wants without thought for anyone else around her. The scene in which she is surrounded by a group of men fawning all over her is a perfect example of her initial character. She laps up the attention even as she is pining over another man, one who belongs to someone else. She doesn’t care a whit for any of those men, and simply wants to monopolize the men’s attention. She even marries one just to try and make Ashley jealous.

As the war begins, Scarlett marries and becomes a widow without even the slightest bit of grief following the news.

Brazen and still wrapped up in her own little world, she even dares to dance with another man while she is still in mourning for her husband, a character that hardly makes a blip in our consciousness due to his lack of importance in Scarlett’s life. Even so, Rhett Butler still wants her even then. He sees her for what she is and appreciates her willfulness and brutal honesty. Ashley Wilkes also loves her despite her many shortcomings, but is unwilling to marry her when the kinder and gentler Melanie is available.

Melanie presents as the perfect foil in this story for Scarlett. She is all kindness when Scarlett is all selfishness. She is all understanding when Scarlett doesn’t even know the meaning of the word. Oddly enough, these two polar opposites become very close friends. Odder still they both are madly in love with the same man, and Scarlett can still stand to be around Melanie. I understand that part of her reason for Scarlett wanting to begin the friendship is her desire to get closer to Ashley. However, what starts out as a means to an end becomes a true friendship and sisterhood in the most basic sense. Unwillingly, Scarlett grows to care deeply for Melanie despite her designs on Ashley. It is this friendship that convinced me to like Scarlett, regardless of my initial judgment of her.

So, just who is Scarlett O’Hara? Is she the conniving, narcissistic girl from the beginning of the movie, or the kinder, stronger woman she becomes through this friendship and the trials of the war? Well, strangely enough, I would say she manages to embody both even up to the very end of the movie. The war snaps her out of her perfect world. She is forced to become a better, stronger, and kinder individual because of it. However, she still manages to retain that willfulness and honesty that Rhett appreciated from the very beginning. Both men see her for who she really is, but Rhett loves her for it rather than despite it. So, which man would you choose? Well, I can say with absolute certainty that I would go with Rhett, hands down. Scarlett could never have actually been happy with Ashley. He would always want her to change a little bit, to be more kind and giving, the way Melanie is. He doesn’t truly love all of her. Rhett on the other hand loves every single part of Scarlett, including her less attractive character flaws.

But let’s put the romance aside for now and look at some of the other aspects of this film. The first thing I noticed when I began this film was the theatrical nature of it. I’ve noticed that these older films seem to be more theatrical in terms of acting and plot. Gone With the Wind really embraces this and lets that aspect shine through by openly acknowledging that relationship with the theater. It starts off as a play does with an overture, and listing the different cast and characters. It even has an intermission in the middle of the movie. The entire production is very reminiscent of a theatrical play. I feel like this movie has sort of bridged the gap for me in terms of this change from theatrical film to more realistic film. It provides a point of reference where I can openly see that older films chose to take a more theatrical approach. Before, it seemed just like overacting, but this open acknowledgment of the practice settles things for me. I can see now that it was a conscious decision rather than the product of inexperience.

Aside from showing the growth of Scarlett, the movie also gives us a unique peek into history. The depiction of life and the trials for southerners during and after civil war is a major part of what makes this movie so interesting. We get to see this entire world go from it’s height to the break down of it’s entire civilization. What was once beautiful countryside where the genteel southern ladies and gentlemen would have their garden parties becomes a wasteland devoid of all it’s former wealth. As Ashley states, “What do you think becomes of people when their civilization breaks up? Those who have brains and courage come through alright. Those who haven’t are winnowed out.” Gone With the Wind reveals the strength and courage it takes to survive and flourish after such a devastating loss.

Scarlett is one of those people with brains and courage. “As God is my witness, they’re not going to lick me. I’m going to live through this and when it’s all over, I’ll never be hungry again. No, nor any of my folk. If I have to lie, steal, cheat or kill. As God is my witness, I’ll never be hungry again.” She is determined to rise up again out of the ashes created by war. Scarlett’s stubborn will, the thing Rhett seems to love the most, is what gets her through this terrible time. She is able to come out the other side after extreme death and despair. She not be the most likeable person all of the time, or maybe even half of the time, but she’s certainly a fighter.

The film also gives the audience an idea of the kind of attitude a person is forced to take in the face of war and one’s own possible destruction. After she kills a Yankee soldier Scarlett says, “Well, I guess I’ve done murder. I won’t think about that right now. I’ll think about that tomorrow.” This demonstrates the kind of unthinkable places a person must go inside one’s own mind during such violent times. Scarlett isn’t a murderer by nature, but she is forced into the role for her own protection while the country is at war. Even when all seems lost Scarlett is a survivor at heart. Circling back to the romance aspect of the film again, Rhett Butler is the man who sees that best and loves Scarlett for that very reason. Like him, Scarlett is a survivor at heart.

Rhett exclaims before he goes off to war that, “There’s one thing I do know… and that is that I love you, Scarlett. In spite of you and me and the whole silly world going to pieces around us, I love you. Because we’re alike. Bad lots, both of us. Selfish and shrewd. But able to look things in the eyes as we call them by their right names.” Both of these characters are in tune with reality and the kind of limits one must go to survive in this cutthroat world. They are willing to do whatever it takes to survive and flourish. While this may seem like a harsh way to be, in times of war it is the only way to survive. I think Scarlett O’Hara and Rhett Butler demonstrate that beautifully. It’s not a pretty or kind way to live, but it is a necessary evil for them in terms of survival. Melanie is a much more agreeable and kinder character, but without Scarlett she wouldn’t have survived the war. She would have probably died in childbirth. It is Scarlett who saves her from this fate.

The only major problem I have with this movie is it’s ending. Why when everything was perfect did Scarlett have to go and mess things up? Rhett Butler may not be a saint but he was perfect for her. And she realized it too late. It makes me hate her all over again, like I did at the beginning of the movie! But I guess it’s a good example of humans being human. She just didn’t realize how precious Rhett’s love was until she lost it. As Rhett Butler says to Scarlett, “I’m sorry for you Scarlett…Sorry for you because you’re throwing away happiness with both hands, and reaching out for something that will never make you happy.” Let that be a lesson to us all. Although, as a last thought, I secretly like to believe that she does get him back.

Our romance-themed entertainment site is on a mission to help you find the best period dramas, romance movies, TV shows, and books. Other topics include Jane Austen, Classic Hollywood, TV Couples, Fairy Tales, Romantic Living, Romanticism, and more. We’re damsels not in distress fighting for the all-new optimistic Romantic Revolution. Join us and subscribe. For more information, see our About, Old-Fashioned Romance 101, Modern Romanticism 101, and Romantic Living 101.
Pin this article to read later! And make sure to follow us on Pinterest.
By Rebecca Lane on December 4th, 2014

2 thoughts on “My Journey Into Old Movies: Gone With the Wind”