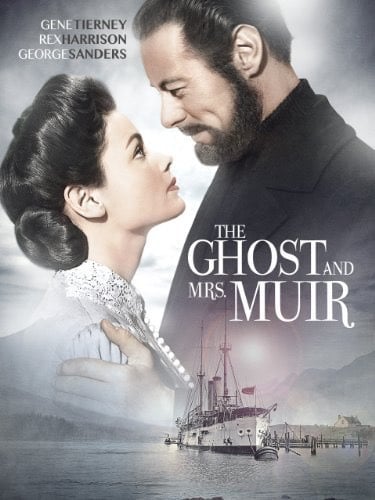 The Ghost and Mrs. Muir is actually a film I’ve wanted to watch for quite some time, so I was actually looking forward to this week’s assignment. Usually I am somewhat apprehensive when approaching these classic films, even though I’ve been watching them for weeks now. I notice myself slowly adjusting to the different style, but it still feels a bit foreign to me every time I start one. Although, I’ve noticed that I don’t automatically cringe anymore when I hear the music for the opening credits. If you’ve been reading this blog, you’ll know that that was a particularly difficult thing for me to adjust to when I first started watching older films. But, I find I even somewhat enjoy the opening music now. At least, I didn’t mind the opening credits for The Ghost and Mrs. Muir. It’s interesting to notice the small changes in my perception and comfort with these films that have occurred the longer I’ve been writing this column. I thought I would never be able to stand watching movies in black and white, but I now find that I sometimes find it charming. I’m also getting more accustomed to the different acting style of these films. Whereas before the acting seemed very over-the-top and theatrical, I’ve noticed that I’m growing used to the style, and don’t notice the difference quite as intensely. All in all, I find myself gradually warming up to older movies.

As for The Ghost and Mrs. Muir, I thoroughly enjoyed it. I am a big fan of movies about the supernatural, so I was already inclined to enjoy the subject. I find the idea of a live person encountering a ghost and forming a close relationship with them quite romantic. It’s another one of those pairings that make up the trope of the star-crossed lovers. It made the plot engrossing and romantic for a great deal of the movie, and then, with the realization of the futility of the pair’s romance, passes into the realm of the dramatic and tragic. However, I liked that this film, while it took a while, did end up with the couple being reunited and them being able to finally have a relationship. I’m a sap for happy endings, so that was a major plus. I don’t think I would have liked the movie quite as much if it had ended tragically.

If the title didn’t make it clear, the couple of interest in this film is Mrs. Muir and the ghost of Captain Daniel Gregg, a former sea captain who haunts the old house Mrs. Muir moves into. The pair encounters each other the first day Mrs. Muir, recently made a widow, walks into the house she has rented for her and her daughter. Captain Gregg attempts to scare off Mrs. Muir, not wanting the living encroaching on his afterlife in his home. She, however, responds with interest in him rather than fear. She talks to him as if he’s just another person, a reaction the Captain was definitely not expecting from what he sees as a gentle young woman. The two subsequently form an odd friendship, with the captain becoming a sort of confidant and bosom buddy to Mrs. Muir. He develops a protective attitude toward the widow and her young daughter, scaring away unwanted intruders, and even helping Mrs. Muir find a way to earn enough money to buy the house.

As time goes on, the two begin to develop stronger feelings for each other, with both becoming increasingly frustrated over the impossibility of their relationship. Captain Gregg knows they can never be together romantically, and his conscience urges him to insist the Mrs. Muir get out in society and meet other people, including men. His desire to see her happiness outweighs his selfish need to have her all to himself. His love for her is strong enough to make him deny his own happiness in favor of Mrs. Muir’s. This comes to a head when Mrs. Muir meets a man that she decides she wants to marry. Knowing his continued presence will only serve to confuse Mrs. Muir’s feelings and possibly ruin her chances at happiness, he decides to leave her to live her life without him and the reminder of their doomed relationship. He leaves her with the belief that their time together was simply a dream.

At this point the story veers into the realm of the tragic, when Mrs. Muir discovers that the man she was seeing is actually married. What follows is a brief look at the rest of Mrs. Muir’s life. She seems to lose her sparkle and vivacity from this point on. Mrs. Muir goes on to see her daughter grown, have grandchildren, and spend her life alone in the house with her maid as company. Her life becomes quite empty without Captain Gregg’s presence, and seems to pass swiftly by in a monotonous and somewhat joyless haze. Her eventual death comes as a relief, a freedom from her life spent without the captain. However, the story is redeemed when the captain appears to guide her into the afterlife. He has clearly been waiting all this time for her, and she once again appears as the young woman we saw earlier on in the movie. The film ends with the couple walking off into the fog and eternity together. In death, they could finally be together.

I really enjoyed the romance and fantasy of this film. I loved Rex Harrison as the captain. He was perfect for the role, embodying the idea of an untamed and obstinate man of the sea. His gruff exterior slowly fades away to reveal a caring and deeply emotional character. The pairing of his character with the somewhat prim, but adventurous Mrs. Muir is certainly an interesting one. They compliment each other, each one providing the characteristics that the other lacks. Mrs. Muir’s more calm and grounded spirit provides comfort and stability for the captain, while his adventurous and devil-may-care attitude feeds the adventurous soul lying deep within Mrs. Muir. The two complete each other. In my opinion the story insinuates that the couple are soul mates, particularly at the end when they reunite in the afterlife.

All in all I truly enjoyed this classic film. I think I would even watch it again, which is a high compliment coming from me. I’d be interested to watch more classic movies in this genre. I believe this one may even become a favorite of mine.

Did you enjoy The Ghost and Mrs. Muir? What did you think of the ending? Do you have any suggestions for other movies like this one? Sound off below…

Be sure to check out all of my blogs in this series here.

Our romance-themed entertainment site is on a mission to help you find the best period dramas, romance movies, TV shows, and books. Other topics include Jane Austen, Classic Hollywood, TV Couples, Fairy Tales, Romantic Living, Romanticism, and more. We’re damsels not in distress fighting for the all-new optimistic Romantic Revolution. Join us and subscribe. For more information, see our About, Old-Fashioned Romance 101, Modern Romanticism 101, and Romantic Living 101.
Pin this article to read later! And make sure to follow us on Pinterest.
By Rebecca Lane on January 29th, 2015

3 thoughts on “My Journey Into Old Movies: The Ghost and Mrs. Muir”