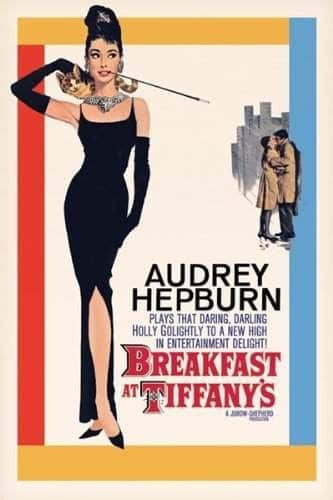 This week I watched Breakfast at Tiffany’s. As it’s acclaimed as one of the best movies of all time, I had some high expectations of it. Watching this movie was an interesting experience for me. By the very end I knew how I felt about it, but all the way through my mind kept changing. At the start of it I couldn’t stand Holly. She’s shallow and flighty, and not the kind of person I could respect in real life. She seems to slide by in life doing nothing but hanging around in fancy clothes and dating rich men. I imagine there actually are people like this, and it honestly appalls me. So, you can imagine how I felt when this is how our heroine turned out to be at the start of the film.

Holly Golightly goes in the mornings to look in the windows of Tiffany’s as she eats her breakfast. She has lived in her apartment for a year, but the place is a wreck and it doesn’t even look as if she’s unpacked.

She keeps pairs of shoes in the fridge, is forever losing her keys to her apartment, and hasn’t even named her poor cat. For crying out loud, she meets Paul and insists on calling him Fred throughout most of the movie. When she began waxing on and on about Tiffany’s and how wonderful it is, I almost screamed. What does she even mean when she says if only she lived in a place that felt like Tiffany’s, she’d change and be a happier, more whole person? I just about burst a vein at that comment.

I grew to see that maybe she was also a bit naïve and innocent too, though. When we learn that she visits the famous criminal Sally Tomato in prison and carries back “weather reports” to his lawyer for one hundred dollars a week, my opinion of her intelligence went down what little way it could. But then I told myself that maybe I was being a little too hard on her, and to just watch and see how she turned out. I did begin to like her a little more when she spoke of her brother Fred and how much she loves him. She genuinely seemed to at least care about one other human being than herself on this planet. It was a start. I generally like to see the best in people, so I was grabbing at straws for a while at the beginning of this movie.

I think it’s when we begin to see Holly through Paul’s eyes that I was able to start warming up to her character. When he sees her playing the guitar and singing in her window, she seems sweet and dreamy. She begins to take on the shape of a dreamer who’s just gotten caught up in this incredible, flashy world that is New York’s rich society. I also noticed that at this point Paul, who I still want to call Fred, starts writing again. It appears that Holly is his muse.

When Paul tracks down Holly’s husband, and learns her back-story, I really began to sympathize with her character. She can’t help that she got caught up in this life. She was a poor girl from a fairly rural place that fell in love with the glitter and shine of the big city. She has such a strong desire to separate herself from that life and that country girl, Lula Mae, that she sometimes doesn’t realize that she’s stepping on other people in order to do so. She claims that she literally isn’t that girl anymore, cutting every part of her out of her personality. It’s why she has to get drunk and lose herself after seeing her husband off. She can’t bear the thought of being that girl again.

But she still can’t help but let that girl’s excitement for the glitz and glamour peak out when she’s having her breakfast at Tiffany’s. It is there I think where she is most vulnerable and most herself. We see her struggle back and forth throughout the movie with who she is. She wants to be the glamorous city socialite, but she still has that little country girl crying out inside her to be set free. It was the peaks the movie gave us of her real personality, that naïve country girl, that warmed me up to Holly. We see this most often when she is around Paul. I also noticed that the more we saw of a kinder, truer version of Holly, the more we saw Paul write and finally publish again.

Paul’s receipt of the fifty dollars is definitely the big turning point in this movie. When Holly and Paul go on that date around the city, Holly finally allows her true self, the country girl, to come out and play. Paul doesn’t expect her to be polished and glamorous. He lets her be herself. When they get the ring from the Cracker Jack box engraved at Tiffany’s, that seemed like a moment when Holly was being true to herself. She was being silly and girlish, wanting something from the expensive store, but simple enough to accept something so small as the engraved ring. I think we also see this when she admits to stealing from little dime stores when she was younger, and daring Paul to do it. She gets pleasure out of the silly act of running away with the cat and dog masks, with getting away with the feat. She became likeable to me.

Now don’t take that to mean I support stealing. I just meant that I liked when her frivolous and excited side came out when she was around Paul. I especially loved that she kissed him at the end of the date, when she never seems to kiss any of the rich “rats” that she dates. It sets Paul apart in a momentous way. He is obviously good for her, and I found myself finally rooting for the couple at this point, when at the beginning I couldn’t imagine shackling such a nice man with a woman as shallow as she seemed.

Of course, as with any good love story, things can’t stay happy for the couple just yet. Holly still hasn’t come to terms with who she is, so she has to react violently against her attraction to Paul. It’s when she finds out that her brother Fred dies that we see her begin to accept herself again. I think she realized she perhaps liked that part of herself a little, that part that was connected to her brother. We can see tell that she has changed when we see her next and find out that Paul is now writing full time, for the New Yorker no less. It seems that Paul’s progress with his writing coincides with Holly’s acceptance of herself, of every part of herself, including the naïve girl from the country. I even think her relationship with Jose was progress because it was a real relationship, not just one of the meaningless dates that she used to go on with her “rats.”

But we all know that Jose is not the man for her. When she gets out of jail and finds out he dumped her when he discovered her ties to criminals and her little incident with the police over Tomato’s drug trafficking, I don’t think anyone is surprised. Hell, even she doesn’t seem surprised. But she’s still not quite ready to accept all of herself yet. She literally pushes both her poor cat, who still doesn’t have a name, and Paul away from her, and insists that she’s still going to Brazil.

It takes the reminder of the Cracker Jack box ring to make her realize who she is and who she really wants to be with. I think that simple ring reminded her of their date as well as of the simple country girl she was. But being someone who was once a simple country girl is alright. There is no need to completely push that part of one’s self away, and I think Holly finally learns that by the end of the movie.

I particularly loved that she first goes after the cat and then turns to Paul. That’s definitely something I can sympathize with. So, in the end, this movie absolutely swept me away. By the final scene of the movie, I knew for sure that I was in love with it. But, I must insist on pointing out that it literally took up until that last scene for me to decide I loved it. I feel as if I changed almost as much as Holly did.

What are your thoughts on Breakfast at Tiffany’s? Sound off below…

Our romance-themed entertainment site is on a mission to help you find the best period dramas, romance movies, TV shows, and books. Other topics include Jane Austen, Classic Hollywood, TV Couples, Fairy Tales, Romantic Living, Romanticism, and more. We’re damsels not in distress fighting for the all-new optimistic Romantic Revolution. Join us and subscribe. For more information, see our About, Old-Fashioned Romance 101, Modern Romanticism 101, and Romantic Living 101.
Pin this article to read later! And make sure to follow us on Pinterest.
By Rebecca Lane on November 13th, 2014