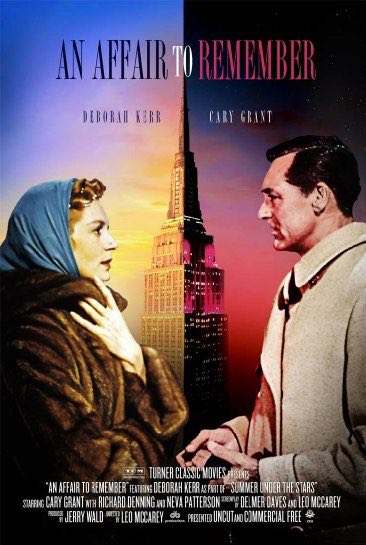 I’m a fanatic when it comes to grand romances, be they in literature, television, or film. So, I knew that An Affair to Remember would be a hit with me. Top that off with the fact that Cary Grant plays the lead and the movie had no problem reeling me in hook, line, and sinker. I had a good inkling that I might have no choice but to love this movie, what with it’s universal popularity. For crying out loud, it’s been referenced in such major hits as Sex and the City, Sleepless in Seattle, and The Mindy Project. Let’s be honest, as a person who loves all three of those titles, I was pretty much doomed from the start.

The story begins with the meeting of playboy Nickie Ferrante (Cary Grant) and nightclub singer Terry McKay (Deborah Kerr) on a cruise ship traveling from Europe to New York. Terry finds Nickie’s cigarette case and is about to return it to him when they happen to cross paths. Terrie, unable to resist being just a bit nosy, notices the rather risqué note inscribed on the inside of the case. Nickie asks, “You don’t happened to have a match?” Terry retorts, “You could light it from that inscription, couldn’t you?” This chance meeting sparks a friendship between the two that will turn into much more as time goes on.

Nickie is a man secretly unsatisfied with life. Bored, he acts the part of playboy, carefree and roguish. As his Grandmother comments at one point, “Everything comes too easily to him. He’s always attracted by the art he isn’t practising, the place he hasn’t been, the girl he hasn’t met.” The chemistry between Nickie and Terry glares obviously from their very first meeting. She is unlike any other woman he’s met. Terry doesn’t fawn all over him, treating him to her brutal honesty, something he rarely experiences. She is a breath of fresh air for this man who has everything. Nickie even attempts to use one of his signature pickup lines on Terrie, which she rebuffs, asking if it ever actually works on most women. Because she won’t give herself to him as easily as other women, Nickie finds her intriguing. She keeps him on his toes, teasing him about his playboy lifestyle. Her intelligence and feistiness sets her apart from other women, gaining her his respect and friendship.

I can trust you can’t I?

Terry fulfills a role in Nickie’s life that he has never had in a woman, or any man for that matter: the role of a confidant and true friend. Nickie trusts Terry, dropping his playboy façade when he is with her. He can open up to her in a way that he has never been able to with anyone else. During one conversation, Nickie tells Terrie, “But you have such an honest face.”

“I have?” Terry replies.

“Yes, but the Captain has an honest face too! Why can’t you tell him your troubles?”

And so, the two grow to become close friends, finding in each other what they haven’t been able to find anywhere else: acceptance and true friendship. At one point Nickie becomes tired of Terry constantly bringing up his playboy past. He trusts her, and wants her to trust him in return. He wants her to take him seriously in a way he’s never wanted anyone else to.

Nickie is not alone in this. Terry also yearns for someone who will accept her for being herself. Her fiancé loves her, but tries to change her. He wants to mold her into the perfect wife, one with proper manners, who knows music and dancing. But, Terry is too outspoken and feisty to be satisfied with that kind of life. Nickie accepts her for who she is, not wanting to box her into his own idea of the perfect woman.

Now, don’t get me wrong. This isn’t a tale about evil two people eschewing their evil, controlling partners for each other. Both Nickie’s and Terry’s partners are perfectly nice people, who genuinely care about them. Later in the film after Terry breaks off her engagement to Kenneth he says, “I really hope you’ve found happiness, and if you’re ever in need of anything, like someone to love you, don’t hesitate to call me.” No, this is simply a story about two people who are meant to be together, almost as if they are two halves of one whole. You can’t always choose who you love.

As the two grow closer their attraction to each other becomes more and more obvious. Terry tries to break their friendship off at one point, but fate has other ideas. The two can’t seem to help but run into each other at every turn. They both happen to order pink champagne at the bar. Both are accidently seated at tables next to each other at dinner. No matter how hard they try, they can’t seem to escape each other.

As the trip progresses so do their feelings for each other. The spark between them that everyone else with eyes can see becomes obvious when, during a stop at port, Nickie invites Terry to visit his grandmother. Terry, still not brave enough to completely drop her guard around Nickie, teases Nickie about him having a girl in every port. Nickie, tired of Terry’s distancing tactics, insists that he’s telling the truth and that she should trust him by now. From this interaction, we can see that Nickie is becoming a different person due to Terry’s influence. He’ s less of a playboy and more of a emotionally mature gentleman. I’m sure a great deal of this stems from his obvious feelings for her. He doesn’t want her to see him as the carefree playboy. She makes him want to be a better person.

As it turns out, Nickie told Terry the truth. They really do stop to pay a visit to his grandmother. Terry sees another part of Terry during this sojourn. She plays witness to his relationship with his sweet old grandmother, who he dotes on. Nickie’s grandmother is yet another person who can see the strong connection between these two. She takes on a kind of fairy godmother aspect in the movie, approving of the couple’s union. She also promises to give a lace shawl of hers to Terry one day, which ends up playing a big part in the plot. But that’s all I’ll say about that.

Back to their visit. Terry fits naturally within Nickie’s family. Nickie’s grandmother welcomes her with open arms, clearly possessing her own thoughts on the compatibility of the two. During one conversation with Nickie, his grandmother hints at that there is a “good woman” out there for him, all while staring pointedly in Terry’s direction.

Just before they leave for the cruise ship the three toast. Terry suggests a toast to Nickie’s upcoming nuptials, but the grandmother, looking at them knowingly, instead toasts, “May your voyage home be a pleasant one.” We also see her notice the soft look on Nickie’s face as he gazes at Terry while she’s not looking. As the two walk away from the grandmother’s home they hold hands for the first time.

The trip to Nickie’s granmother’s turns into the catalyst in their relationship. When they return to the boat the pair are clearly no longer just friends, but in love as well. Both are aware of this. That night Terry says, “We’re heading into a rough sea Nickie,” meaning more than just the literal oncoming storm. “I know,” he replies. “We changed course today.”

Thus begins their secret star-crossed love affair. I don’t want to give the ending away, but I will reveal that while they must part in New York, the two agree to separate from their respective partners and meet at the Empire State Building in six months. Nickie will return to painting to make a living and Terry will return to singing. Both will meet again when they are worthy of each other. The question remains, however, whether they will both show up at the appointed time and place. They are both taking a huge leap of faith. Can their love conquer all, or will fate conspire against them? This film certainly raises the question of fate and destiny, as well as the idea of soul mates. While I won’t reveal how the story ends, I will say one last thing. I think this may be one of my favorite romances of all time. Take that how you will.

What do you think of An Affair to Remember? Is it among the top love stories of all time? Do you think Nickie and Terry are destined to be together? Sound off below…

Our romance-themed entertainment site is on a mission to help you find the best period dramas, romance movies, TV shows, and books. Other topics include Jane Austen, Classic Hollywood, TV Couples, Fairy Tales, Romantic Living, Romanticism, and more. We’re damsels not in distress fighting for the all-new optimistic Romantic Revolution. Join us and subscribe. For more information, see our About, Old-Fashioned Romance 101, Modern Romanticism 101, and Romantic Living 101.
Pin this article to read later! And make sure to follow us on Pinterest.
By Rebecca Lane on December 12th, 2014