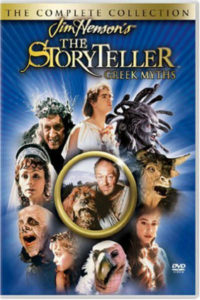 A recent review right here on The Silver Petticoat Review introduced me to Jim Henson’s The Storyteller series, a TV series from nearly thirty years ago that retold and reenacted fairytales with none other than the very talented John Hurt as the storyteller/narrator.

RELATED: Delve Into Fairy Tales, Fantasy and Romance as You Settle Down Before The Fire With Jim Henson’s The Storyteller

I had never heard of the series before, never seen it, so I made a mental note to check it out sometime. Lo and behold, what was to be found at my local library, but a DVD of the second series of Jim Henson’s The Storyteller, the series dealing with Greek myths.

Sometimes a story doesn’t end with two people falling in love. It starts there. – The Storyteller

Jim Henson’s The Storyteller: Greek Myths is a short series with only four episodes. Each 25-minute episode retells and reenacts a different mythic tale: Daedalus and Icarus, Orpheus and Eurydice, Perseus and the Gorgon, and Theseus and the Minotaur. The renowned British director, Anthony Minghella, is credited as the series’ creator. And that says something about the quality of the production. 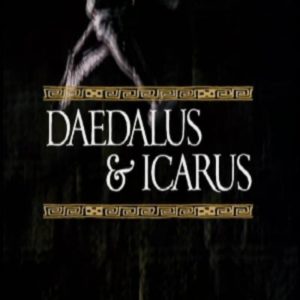 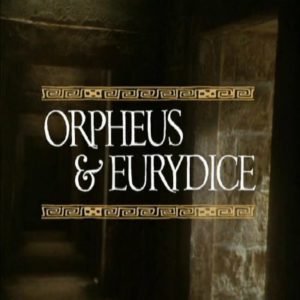 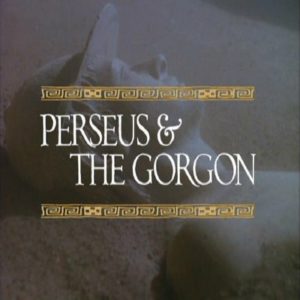 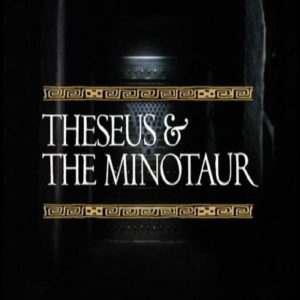 RELATED: The No. 1 Ladies’ Detective Agency (2009): A Gentle and Joyful Gem of a TV Series

The storyteller – this time around – is none other than Dumbledore himself, yes, the commanding and captivating Sir Michael Gambon. The dog, who comments, cracks jokes and asks questions, is still there as the Storyteller’s faithful companion, performed and voiced by Jim Henson’s son, Brian. These two wander in the Minotaur’s labyrinth (they’ve been thrown in there for stealing), finding objects, which ignite the telling of a tale or two or four.

If I told the whole story, your head would burst. There is no one story. There are branches, rooms like this place – rooms, corridors, dead ends. – The Storyteller

It’s dark in the maze and the tales themselves are dark. It’s been a long while since I brushed up on Greek mythology, so this series has been an enchanting and engrossing refresher. There are no happy endings here. There are murders and betrayals and jealousies and curses and pains and sorrows and heartaches and love, much love, in all its varied forms.

It’s good. I mean, like, really good. It surprised me how captivated I was. And it’s a captivation not brought about by computer animation and special effects and action-packed, whizzing adventure. It’s the words that captivate – it’s very rich textually. It’s the delivery of these words, the telling of the tales, that captivates – the performances in this are top notch. It is all very theatrical, in the sense that it could be enacted on a stage. The language is very scripted, very dense and intense and poetic, and the actors delivering these lines are good, like, really good.

It’s always just as you think you have things in your grasp that you close your fingers and find they’ve gone. Because when we’re in love, it’s our hearts that guide us and betray us all the time. – The Storyteller

Besides the classically trained Sir Michael Gambon, with his gritty intensity, there are appearances by the crème of the British theatre. There’s Derek Jacobi, Lindsay Duncan, John Wood, Frances Barber, David Morrissey (Colonel Brandon from the 2008 BBC adaptation of Sense & Sensibility), John McEnery, Kate Buffery and on it goes. They’re names that you don’t necessarily recognize, but they’re folk who can act and act well, really well, even in minor, minor roles.

Sir Robert Stephens (ex-hubby to Dame Maggie Smith and father of the lovely Toby Stephens, who made a pretty darn fine Mr. Rochester…) is maybe onscreen for three minutes, portraying Hades, god of the Underworld, yet he is spellbinding in that short time. You have this sense that you just witnessed greatness. It’s a chillingly powerful performance, not easily forgotten.

Oh yes, oracles are true. Stories are true. There are monsters at the end of the world. There are looks that can kill. And who has not been petrified with fear? – The Storyteller

Content Note: The series has a PG rating. In Denmark, it is not recommended for children under 7 years of age. It is dealing with some rather heavy subject matters and there are some scary monsters.

Have you seen the series? When’s the last time you read some myths?

Our romance-themed entertainment site is on a mission to help you find the best period dramas, romance movies, TV shows, and books. Other topics include Jane Austen, Classic Hollywood, TV Couples, Fairy Tales, Romantic Living, Romanticism, and more. We’re damsels not in distress fighting for the all-new optimistic Romantic Revolution. Join us and subscribe. For more information, see our About, Old-Fashioned Romance 101, Modern Romanticism 101, and Romantic Living 101.
Pin this article to read later! And make sure to follow us on Pinterest.
By Jessica Jørgensen on July 6th, 2017