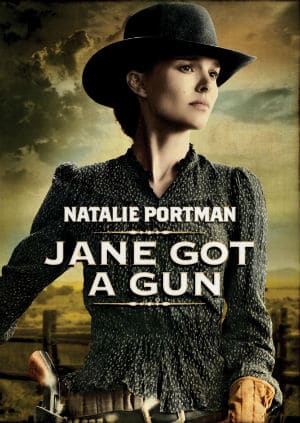 Jane Got a Gun Review

A lot of great movies that I wanted to see were released at the end of last year and the beginning of this one. I was able to see most of them, but one film, in particular, turned out to be very difficult to track down. That film was Jane Got a Gun, a Western loosely based on the 1970’s film, Hannie Caulder.

Jane Got a Gun only got a limited release in theaters, but it was plagued with problems since work on the project began. I was reading up on the production, and apparently the screenplay was completed (and really liked!) in 2011, even featuring on the Blacklist, a list of the most well-liked unfilmed scripts of the year. The film was shot in 2013, but there were a variety of disagreements between the cast and crew, and many changes were made before filming.

The screenplay for Jane Got a Gun was written by Brian Duffield, Anthony Tambakis, and Joel Edgerton; it was directed by Gavin O’Connor, and there were many producers on the project. The film stars Natalie Portman (who also worked as a producer) as Jane Ballard, Joel Edgerton as Dan Frost, Ewan McGregor as John Bishop, and Noah Emmerich as Bill (Ham) Hammond.

However, Jane Got a Gun’s road to the screen was a bit of a rocky one. This film was plagued by issues; even in December 2015, there were people doubting if this film would ever be released. Michael Fassbender was originally cast as Dan, with Joel Edgerton as Bishop. Michael Fassbender had conflicts with X-Men: Days of Future Past, and reportedly clashed with director Lynne Ramsay (who would later leave the project). He was replaced by Joel Edgerton, who was replaced by Jude Law.

When Ramsay left the project after a serious dispute, so did Law. As Law and Ramsay left very close to the day filming began, this caused some issues. Jude Law was replaced by Bradley Cooper, who was forced to drop out as well due to other commitments. Gavin O’Connor was hired as director, and eventually, Ewan McGregor was hired as Bishop.

Despite all that, I think this movie was well worth the watch. Jane Got a Gun reminded me a lot of the film 3:10 To Yuma because they played with who were the good people and who were the bad people. There were a lot of gray characters; Jane’s husband, Ham, is an outlaw, but does that make him a bad person? Dan Frost is generally a good guy but he makes mistakes.

Even when I found myself wishing that characters would make other choices, I could see where they were coming from. I think this stems both from the wonderful script and the wonderful acting. The relationships, the tensions, the pain…it all came alive. Plus, the film was beautifully shot and the music was just the right amount of epic and tragic.

Jane Got a Gun is set in New Mexico and is the story of Jane Hammond, the wife of wanted outlaw Bill (Ham) Hammond. John Bishop and his gang have been trying to track down the couple for years, and, finally, they find Ham. After the Bishops shoot Ham, leave him in terrible condition, and warn Ham that they’ll find them, Jane realizes that she can either run away or fight Bishop and his men.

Deciding to fight the Bishop Boys, Jane enlists the help of her former fiancé, Dan Frost, to help her fight. Although reluctant to help Jane and her husband, Dan goes with her to defend her home. Together, they confront not only John Bishop but their own pasts.

Without giving too much away, Dan had left to fight in the Civil War, and, thinking he was dead, Jane took their daughter Mary out West to create a new life for the two of them. However, Jane’s road took some twists and turns she had never imagined.

As the film continues, we are able to piece together more of the story of Jane, Dan, Bishop, and Ham. It’s more complex than we think, and I liked how the backstory was teased out as the film went on. Because of the way it unfolds, I don’t want to give you any more details than that, even with the romance. I will say that it was a well laid out and thoughtful romance that I, personally, thought worked out as well as it could have for the characters involved. I was satisfied with the ending, though it was bittersweet.

I read a criticism (seriously, I’ve been wanting to see this movie for such a long time, I’ve been reading about it) that Jane is a weak female character, and I would disagree. She was a young single mother in the American West after the Civil War; her options were very slim. I appreciated that they didn’t try to sugarcoat the dangerous situations she was in. Although it was horrible to think of, it helped the audience understand Jane. She was put in a tough situation, taken advantage of, but still did the best she could.

One of Jane’s defining traits is that she is a very loving and protective mother, which also made her feel real. Sure, Jane can shoot, but she’s defending her family.  She’s not the typical strong character, but she is tough when she needs to be. She knows when she can handle things, and when she needs to get help, and I think that makes her even more compelling.

At least, that was how I saw it.

I loved this movie, from the pacing to the acting to the music to the bittersweet ending, it just worked. It’s not a perfect movie, but it’s a good one. If you like western period pieces that are also dramas with a healthy helping of action and strong female characters, you’ll probably enjoy Jane Got a Gun. It’s the story of a woman who is determined to face her past and protect her family at all costs, presented in a dark but compelling film. Check out my content warning before watching, though; the film is rated R for a reason.

CONTENT WARNING: Jane Got a Gun is rated R, so be aware of that. There is quite a bit of violence, some foul language, hints of assault and trauma in Jane’s past. Some threats are also made to her in the film.

Our romance-themed entertainment site is on a mission to help you find the best period dramas, romance movies, TV shows, and books. Other topics include Jane Austen, Classic Hollywood, TV Couples, Fairy Tales, Romantic Living, Romanticism, and more. We’re damsels not in distress fighting for the all-new optimistic Romantic Revolution. Join us and subscribe. For more information, see our About, Old-Fashioned Romance 101, Modern Romanticism 101, and Romantic Living 101.
Pin this article to read later! And make sure to follow us on Pinterest.
By Bailey Cavender on May 4th, 2016

7 thoughts on “Jane Got A Gun: A Dark but Compelling Western Drama”