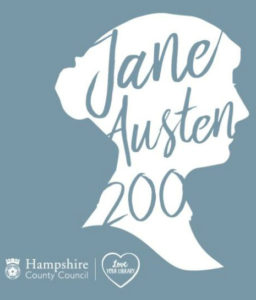 Jane Austen 200: A Life in Hampshire

It is the bicentenary of Jane Austen’s death this year. The world lost an unmatched literary talent the 18th of July 1817. Miss Austen was only 41 years old. She was laid to rest in Winchester Cathedral the 24th of July 1817. Four mourners attended her funeral.

To set focus on Miss Austen’s life and works and to celebrate her enduring influence and legacy, the county of Hampshire in England – the county where Jane Austen was born and raised and spent much of her life and subsequently died and is interred – has chosen to make 2017 one long Jane Austen festival. Throughout the county that inspired so much of Austen’s writing, there are exhibits, concerts, picnics, plays, readings, walks, talks and on it goes.

Hampshire Cultural Trust, in collaboration with many and varied partners, has put together a wonderfully diverse, year-long program for Jane Austen 200: A Life in Hampshire. You can see the whole program here and start exploring what’s to be seen and heard and tasted and experienced. There are lots of fine photos, videos, links to exhibitions and museums, yes, much to explore and much to pique your interest.

To give just a taste of what’s happening in the county of Hampshire, well, there is:

An exhibition, The Mysterious Miss Austen, in Winchester, which investigates who Jane Austen was. Six known portraits of Austen have been collected and are shown together for the very first time. Austen’s silk pelisse coat and her purse are on display, as well a manuscript in Austen’s own hand of an alternative ending to Persuasion. Read more here.

A guided funeral procession to Winchester Cathedral, following the same route from 200 years ago. A special service will then be held in the Cathedral. A simple inscription in the floor in the north side of the nave marks Jane Austen’s final resting place. Read more about Jane Austen and Winchester Cathedral here and about the event here.

A Jane Austen Regency Week the last week of June in the towns of Alton and Chawton. A mini-festival within a festival, you can hear about the importance of aunts in Austen’s life and works, you can learn to embroider, you can eat and dance – Regency-style – and much more. Read more about Regency Week here.

In Basingstoke in October, a performance of a “lost” Jane Austen novel with the Regency-era, improv theatre troupe, Austentatious. No two plays are ever the same, and the improvs are performed in full Regency garb with live accompaniment. Previous “lost” novels have included Mansfield Shark, Sixth Sense & Sensibility, Double O Darcy and Bath to the Future. You can read more about Austentatious here and about the event here.

An opportunity to try your hand at Jane’s games, which is to say, 18th-century games and hobbies, with which Jane Austen most certainly would have been acquainted. Gilbert White and the Oates Collection in Selborne host a play day in August. Read more about the event here and about the museum here.

And the events go on and on.

This brief list is the proverbial tip of the iceberg. So, go check out the program for Jane Austen 200: A Life in Hampshire, be inspired, be curious, and if you have the opportunity, be sure to swing by Hampshire in 2017. Something’s sure to be going on.

Whether or not you can make it to southern England, you can always read some Austen and celebrate an extraordinary woman. That you can do pretty much anywhere in the world – thankfully.

What does Jane Austen mean to you? Share your thoughts in the comments.

Our romance-themed entertainment site is on a mission to help you find the best period dramas, romance movies, TV shows, and books. Other topics include Jane Austen, Classic Hollywood, TV Couples, Fairy Tales, Romantic Living, Romanticism, and more. We’re damsels not in distress fighting for the all-new optimistic Romantic Revolution. Join us and subscribe. For more information, see our About, Old-Fashioned Romance 101, Modern Romanticism 101, and Romantic Living 101.
Pin this article to read later! And make sure to follow us on Pinterest.
By Jessica Jørgensen on June 16th, 2017