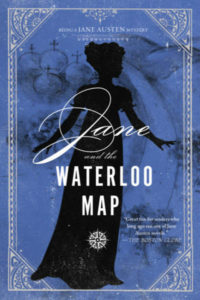 Book Review: Jane and the Waterloo Map (2016) by Stephanie Barron

What if Jane Austen had turned her keen eye for observation to solving murders? That is the essential premise of Stephanie Barron’s Jane Austen Mystery series, of which Jane and the Waterloo Map is the latest installment, number 13. It’s cozy crime in Regency England with none other than one of the most beloved female writers of all time as the heroine. It’s good stuff.

It’s November 1815. Jane is in London, staying with her brother Henry, nursing him back to health from a long illness, and copyediting Emma. She receives a summons to Charlton House, His Royal Highness the Prince Regent’s London abode. While touring the house’s library, she stumbles upon a dying man, a heralded hero from the Battle of Waterloo, Colonel MacFarland. Soothing the man in the violent throes of an apparent apoplectic fit, she hears his final words: “Waterloo map.”

Thus begins the mystery of Colonel MacFarland’s death. Is this murder? What is the Waterloo map? Where is it? What does it depict? Who has it? Why is it so valuable? Yes, many questions are raised by the curious Jane, who has a keen eye, a substantial intellect and a subtle forthrightness – which is to say she possesses a forthrightness that does not offend but that allows her to contravene societal conventions with aplomb on occasion. This is rather endearing.

With lives at stake, including her own, Jane is thrust into the world of war – the Napoleonic War – and its aftermath, into secret cyphers and delicate watercolours. She is aided in her sleuthing by her brother, Henry, and her niece, Fanny, as well as an estimable acquaintance, if not more, Mr. Raphael West, who is the cause of more than a few blushes on our heroine’s visage. The two have met in a previous volume in the series and they think rather highly of one another, that is obvious. Although this budding love affair is already bittersweet before it even really starts, because it’s 1815 and Jane mentions, again and again, her upcoming fortieth birthday, and we, dear readers, know that she never makes 42. Yes, it’s the 200th anniversary of her death this year.

Despite that sobering note, the book is a fun read. It’s well researched; there are footnotes throughout to explain this and that. I’m no nerdy Janeite. I mean, I love Austen, but I don’t know all the ins and outs of her existence and her writings and such. But Stephanie Barron is such a nerd and has taken actual events from Jane Austen’s life and woven murder mysteries into them. Historiographic meta fiction is perhaps what the academics might call it, where historical facts and letters and newspaper clippings and actual historical people and places and events get intertwined with fictive imaginings and narratives within narratives. It’s good fun.

This is my first introduction to the series, and even though it’s the latest and there are allusions to earlier cases and people, the book can still be read as a standalone piece. And I, for one, will now be working my way backward through the series.

RELATED: Rewriting Fiction: Twenty Moments We Wish We Could Change

This could be a really fun series, but also a prickly one, since so very many have opinions, strong opinions, regarding Miss Jane Austen, her life and her depiction. Any adaptation for the screen would require a substantial budget, great costumes, fine scripts and an even finer actress to play the beloved writer.

Content Note: There is nothing to come after. Well, there are some dead bodies and suspense, but nothing graphic. It is all very cozy.

Have you read the book? What are your thoughts?

Our romance-themed entertainment site is on a mission to help you find the best period dramas, romance movies, TV shows, and books. Other topics include Jane Austen, Classic Hollywood, TV Couples, Fairy Tales, Romantic Living, Romanticism, and more. We’re damsels not in distress fighting for the all-new optimistic Romantic Revolution. Join us and subscribe. For more information, see our About, Old-Fashioned Romance 101, Modern Romanticism 101, and Romantic Living 101.
Pin this article to read later! And make sure to follow us on Pinterest.
By Jessica Jørgensen on July 17th, 2017

4 thoughts on “Jane and the Waterloo Map (2016): Sleuthing in Regency England, Jane Austen-Style”