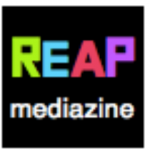 Recently, I started writing for a new online hybrid media magazine REAP Mediazine that just launched on Thanksgiving Day! So make sure to head on over to Reap Mediazine and read all about their exciting vision. There’s original content, production diaries, awards, articles, exclusive interviews and more. It’s a new way for upcoming artists to get their voices heard so help spread the word!

In the launch, I have three articles so I thought I’d share. One is about transformative fan works of art and the other two are interviews.

The first article I wrote is about fair use and fan works of art which you can read in full here: Fair Use and Transformative Fan Works of Art

It is an opinion piece that defends transformative fan works with the voice of famous artist Marcel Duchamp leading my argument. From fan videos to fan fiction to gifs, memes and visual fan art there are various ways people can transform art to make something new, therefore fitting into the category of fair use. So read all about that, especially if you enjoy or appreciate any of the above mentioned mediums.

My second article is an interview I conducted with the inspirational filmmaker and humanitarian Sonia Nassery Cole. She established the Afghanistan Film Foundation, her film The Black Tulip was the official Afghanistan entry for the 2010 Academy Award for Best Foreign Film and she just released her book Will I live Tomorrow about her incredible (and dangerous) experiences filming the movie entirely on location in Afghanistan. She’s an inspirational woman with a lot to say so you can read the interview here:

Sonia Nassery Cole gets personal: Talks The Black Tulip, Being Thankful, Future Projects and the power of film

The final article by me is a Q&A interview I did with Black Nativity/Fruitvale Station casting director Tracy “Twinkie” Byrd. With a lot of passion for film and what she does, she was so much fun to talk to. If you’re interested in film, acting, casting or even in people in general, get to know Ms. Byrd better by reading the interview here:

But I’m not the only writer! So for more awesome content, head on over to the Articles Section to read more!

The photo used above is the picture of their logo found on the official REAP site at reapmediazine.com.

Thoreau, Hollywood and the Perception of Beauty

C.S. Lewis on Writing and Criticism

The New Age of Book Banning

Our romance-themed entertainment site is on a mission to help you find the best period dramas, romance movies, TV shows, and books. Other topics include Jane Austen, Classic Hollywood, TV Couples, Fairy Tales, Romantic Living, Romanticism, and more. We’re damsels not in distress fighting for the all-new optimistic Romantic Revolution. Join us and subscribe. For more information, see our About, Old-Fashioned Romance 101, Modern Romanticism 101, and Romantic Living 101.
By Amber Topping on December 8th, 2013