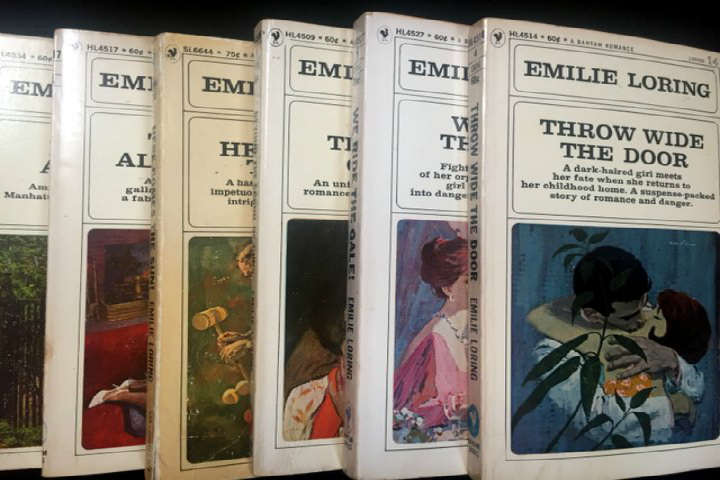 Emilie Loring is a prolific American novelist. Although she didn’t write her first book until the age of fifty, she still managed to publish fifty titles spanning over five decades with millions in print and became as well-known and commercially successful as Agatha Christie.

Born into a Boston household, she most likely inherited her talent from her playwright father. As an adult, she married an attorney and had two sons.

At the time of her death in 1951 she had published thirty novels, however, her sons found additional unfinished story material. They were able to publish an additional twenty titles posthumously and still maintain her unique voice. The last one was printed in 1972.

Emilie Loring had her own unique style and familiar formulas. These are romantic stories, but also include some type of light mystery to solve. They also include pure and wholesome old-fashioned romances to enjoy. Usually, the hero and/or the heroine keep their feelings a secret from each other until the very end. This is done out of consideration for their object of affection in order to protect them. Many times, the hero or heroine holds duty in higher regard than their own personal feelings. And often the couple does not even share a kiss until the end of the story, although their affections for each other are clear to the reader if not themselves.

The heroes are generally educated and practice white collar professions such as architecture, law, advertisement, etc. They are men of strong moral character who often put themselves at risk for their country or their heroine. The heroines are often former heiresses with pluck and courage. Despite their usually recent demotion in social standing, they do not complain but look for ways to serve their families and communities.

One of the pleasures of Loring’s novels is her vivid, descriptive style. She paints a picture with her words to recount an outdoor or indoor setting, the characters’ physical appearance including their personal style and wardrobe, the environment and architecture. Sometimes she will dedicate an entire paragraph just to give you a clear image of what she wants you to see. It is almost as if you are watching a film in your mind’s eye of what you are reading.

Certain themes make repeat appearances in Emilie Loring novels, including religion and patriotism. None of the stories are overtly religious, but because religion is a foundational part of the American culture in this time setting, references to scripture and the importance of moral integrity are always woven in with a clear delineation between right and wrong, good and evil.

Loring emphasizes patriotism and love of country particularly in her novels which were written and published during World War II. Many plots revolve around foreign spies trying to steal American military or industrial secrets while the hero and heroine must foil those plans. The main characters are also always good citizens who participate in the war effort by organizing drives and benefits for soldiers. For instance, they are often involved in neighborhood watches or other similar activities.

Loring’s books usually feature her familiar New England stomping grounds. Boston, New York, and Maine are favorite settings. New England is important not just as a setting but also as the attitude and beliefs of the characters, with many described with characteristics similar to the region.

If you are a classic film fan like I am, then Emilie Loring’s stories are sure to please. Reading one is like stepping back in time to experience the culture, fashion, language, and values unique to each decade in which she was published. These books act like a time machine transporting the reader back to what many would describe as the good old days. You experience it as if you are living it yourself, fully immersed in a time which is now long gone. They will make you nostalgic for a time when honor was a thing to be treasured.

I have read all of Loring’s books and with a few exceptions loved every single one. It is hard to choose a favorite title. If I had to, I would choose Swift Water. I really enjoyed the story of an heiress returning home, to find the local church has hired a very handsome new minister. She makes a bet with a friend that she will not join the other girls in town who pursue him. The only problem is that he has decided that they belong together despite all their differences. I don’t often read romances which feature a minister as the male lead.

Her titles were published in both hard cover and mass market paperback form. They are generally under two hundred pages in length, making them a quick and enjoyable read. I would describe her stories as palate cleansers, something light and pleasant to consume between heavier and denser main courses.

Where to Buy: Currently the only title available digitally is her first published story, The Trail of Conflict which can be downloaded for free on Kindle. You can find her books at used book stores or online resalers.

Have you read an Emilie Loring book? What’s your personal favorite? Let me know in the comments!

Our romance-themed entertainment site is on a mission to help you find the best period dramas, romance movies, TV shows, and books. Other topics include Jane Austen, Classic Hollywood, TV Couples, Fairy Tales, Romantic Living, Romanticism, and more. We’re damsels not in distress fighting for the all-new optimistic Romantic Revolution. Join us and subscribe. For more information, see our About, Old-Fashioned Romance 101, Modern Romanticism 101, and Romantic Living 101.
Pin this article to read later! And make sure to follow us on Pinterest.
By Brittaney B. on July 27th, 2017