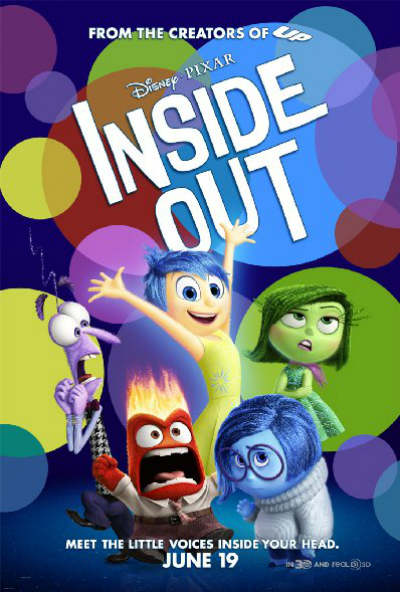 It has been two years since the last Pixar film was released, Monsters University, and has been five years since the last beloved and mostly praised Pixar film was released, Toy Story 3. When Pixar announced they would not be releasing a film in 2014 to restructure their company, people were wondering what would be the fate of Pixar. Are they just going to be focusing on sequels and prequels? Have they run out of original ideas?

When Pixar announced they were releasing this film, I am not going to lie I was intrigued and excited. Obviously, I was not the only one. There has not been a Pixar movie that has been this anticipated in quite some time, not only because of the two years without a new Pixar film but also because Inside Out is directed and co-written by one of the Pixar greats Pete Doctor who also directed Up and Monsters Inc. With all of that said, there is certainly hype and great expectations built for this film.

This film takes place mostly inside the mind of a young girl named Riley Anderson. As such, the film helps explain elements of the human psyche in an extremely creative and entertaining way. It is not just about emotions and memories but also about imagination, dreams, fears, the subconscious and so much more. These elements help progress the plot and are explained gradually.

There are two stories going on in this film. The first story is about the emotions personified as characters inside Riley’s mind. They are Joy, Fear, Anger, Sadness and Disgust. We get to see these emotions interact and the roles they play inside Riley. One day however, Joy and Sadness accidentally end up outside of Headquarters, the control center for Riley’s emotional responses, thus leaving Disgust, Fear and Anger at the helm, and it becomes a race against time for the polar opposites to get back. The second story is about Riley who has just moved from her old home in Minnesota to a new home in San Francisco, California, which she feels is not as good as her old home. She has to go to a new school and she has no friends. She questions herself; she gets snippy with her parents and feels a wide range of emotions.

Since this is a story about emotions, the emotions the film carries also work every well. The audience gets to see the difficulty felt by Riley and the three other emotions as they work to adapt to their new home while the story with Joy and Sadness is full of adventure, action and unpredictability. The film goes deep into the psyche of a kid who questions things, how youth is fleeting and is at the weird, awkward and complex period of adolescence leading into puberty and all of the hardships that comes with that.

This accuracy is not surprising considering the fact that during the film’s production neuroscientists were consulted to help make the film’s setting of an eleven year old girl’s brain believable. The filmmakers also interviewed child psychologists and psychiatrists to make sure they represented both the mind and the girl’s reactions and thought processes at this age accurately.[1]

This film is surprisingly mature and treats children with intelligence and respect. As Riley has these experiences, the film does become rather emotionally complex. Inside Out has many elements that kids can enjoy, but also has elements that adults can enjoy and this is what makes the film so special. It is a film that as children grow older and watch it again they can find new things to appreciate about it.

Despite all the praise this film has gotten, there are a few negatives that I should point out, though these may not be issues for everyone. The film does perpetuate gender stereotypes, mainly from Riley’s mom and dad. This is especially evident in one scene when we briefly go inside the minds of the parents. The dad is thinking about sports and is clueless to the emotional complexities of his daughter while the mother is more observant and becomes exasperated by her husband. It is just this one scene and it is not like these stereotypes make up the entirety of the film but they are still there and it is something to be aware of.

In addition, the film does have a few pacing issues in the beginning and some people could see it as slow. However, I will say that the children in the audience I was a part of were very well behaved and seemed to be engrossed even during the film’s slow beginning. Once the main plot begins however, the film moves at a steady and engaging pace.

In this movie, the audience gets to see firsthand what a character, specifically Riley, is going through as she lives her life. The emotions are exaggerated for comedic effect which results in a group of characters who are quite entertaining and carry the humor of the film. Fortunately, the emotions are not one dimensional and they all have the goal of protecting Riley and keeping her the happy girl she is normally.

Joy is an optimist and cheerful. She always looks for the best in every person and situation. Sadness is a pessimist and she really only sees the negative in situations. She is also patient and a good listener. Anger is well…prone to fits of rage of course and his top literally explodes with fire. He does not smile often and is usually quite grumpy. Disgust often expresses open disdain for most things and it is her job to protect Riley from being poisoned, both physically and socially. Fear often moves with the most exaggeration and it is his job to protect Riley from danger and predict the worst possible outcomes of any situation.

Riley is a very interesting and relatable character. She likes cute things but also adores hockey and has a real talent for it. She is goofy, fun loving and honest. She also has great relationships with both her parents though she can get embarrassed by them like any kid. She must adapt to a completely new environment and experiences some pretty bad days not long after the move so she remains a sympathetic character. You can ask anyone, particularly a child, and they will tell you what an emotional experience moving can be, having to leave behind everything you know and love. I have moved many times and I really related to Riley’s emotions and experiences. So much so that I am not ashamed to admit that I got a little choked up. In the film, moving is used as a metaphor for growing up and I personally think it is wonderful how the film shows the difficulty of that and how it is okay to be sad about it.

The only other noteworthy character is Bing Bong, Riley’s imaginary friend. He is a source of comic relief as well as a guide to the other concepts and places inside the mind. Each character has a purpose in the film and each character is memorable. Every character is also given enough depth so the audience can support them and understand their motivations.

The animation is stunning; one would expect nothing less from Pixar. Like the fact there are two stories, there are two different styles of animation. The animation outside the mind is very down to earth, realistic and simplistic. The animation inside the mind is much more colorful, cartoony, and creative and seems to have no limits. I personally appreciate how the designs in Riley’s mind are interesting without moving into the overly cute or cliché. It reminded me very much of Disney’s Alice in Wonderland with the realistic animation style to what is closest to reality, like the design of Alice, and the inhabitants of Wonderland looking like they came out of a zany cartoon. This artistic approach works well to the film’s advantage and truly brings out the abilities and talent of the artists at Pixar.

The character animation is also really great. In the world outside the mind, the people move realistically and with limits as one would see in the real world. Inside the mind however, the animators make great use of ‘squash and stretch’ but they never overuse it so there is still sophistication and enjoyment to be had. The character designs for the emotions are all unique and entertaining to watch. I also love how the emotions look as though they were composed of energy and moving particles. When the emotions move, we even see them release tiny particles of color. If I did have one complaint about the animation is that the other workers in the mind are a bit too simplistic but that is really just nitpicking. I would certainly say Inside Out is a wonderful example of the kind of animation Pixar is capable of creating.

Inside Out serves as a reminder as to why Pixar is considered one of the greatest animation studios of our time, creating original stories that are engaging, full of heart, creative animation and concepts, and loveable characters. Inside Out met and exceeded my expectations. I know this is an animated movie worthy of praise when people say this is the movie to remind us what kind of animation studio Pixar was, still is and will continue to be. I undoubtedly agree. Welcome back Pixar.

[1] Learn more Inside Out facts at https://www.youtube.com/watch?v=IGcMoM_QlDI

Our romance-themed entertainment site is on a mission to help you find the best period dramas, romance movies, TV shows, and books. Other topics include Jane Austen, Classic Hollywood, TV Couples, Fairy Tales, Romantic Living, Romanticism, and more. We’re damsels not in distress fighting for the all-new optimistic Romantic Revolution. Join us and subscribe. For more information, see our About, Old-Fashioned Romance 101, Modern Romanticism 101, and Romantic Living 101.
Pin this article to read later! And make sure to follow us on Pinterest.
By Moriah Burbank on June 29th, 2015