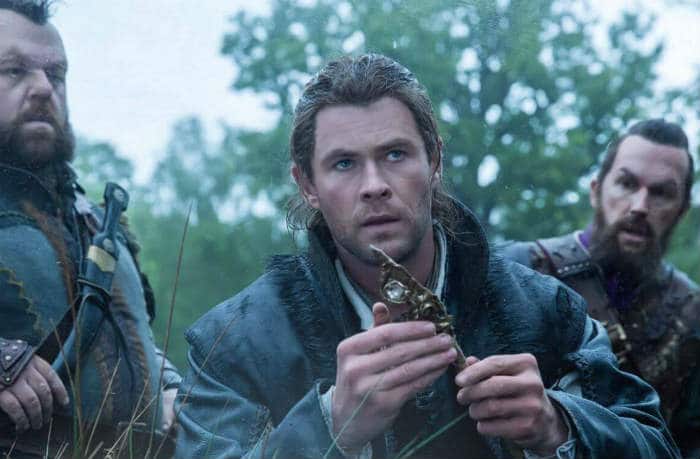 Four years, multiple story revisions and casting rumors later, the follow-up to 2012’s Snow White and the Huntsman (or SWATH as it’s commonly referred to) is finally here. The characters who returned for the sequel treat us to quite a journey that takes place in the same world as its predecessor. Or at least it’s a return to the same world for our titular character (played to perfection by the rugged Chris Hemsworth). High fantasy lovers will be delighted as the production qualities are, in my opinion, off the charts good.

RELATED | Behind the Grimm: Snow White and the Huntsman

A narrator opens the story, telling us a tale of two sisters. One of them, Ravenna (Charlize Theron) marries into and then conquers kingdoms (following the deaths of her many lovers) regularly. Her cold heart is closed off to love, and her fixation on power and beauty demands her heart stay this way. Her sister, Freya (Emily Blunt) is the opposite. Happily in love and carrying a child, Freya’s own heart is eventually turned to stone when her lover kills their infant daughter. Sent to a remote kingdom, there Freya captures all of the village children and raises them as elite huntsmen. There’s only one rule: they must not open their hearts to love. When her two best huntsman – Eric (Hemsworth) and Sara (Jessica Chastain), break this rule, a dangerous series of events fall into place.

Seven years later, Eric has lost Sara (at Freya’s hand) and helped Snow White take back her kingdom during which time, together, they vanquished Ravenna. But as an old foe rises again to threaten Snow’s kingdom, Eric’s loyalty to his Queen is again needed. As he begins a new quest, he comes face-to-face with ghosts of the past; first Sara and later, the fearsome Ravenna.

If you weren’t a fan of Snow White and the Huntsman, then The Huntsman: Winter’s War isn’t likely to be your cup of tea. Step inside this film and you’ll encounter the same kind of world, even still there are eccentricities that allow “Winter’s War” its own unique DNA. At its most basic this is a medieval fairy tale with contemporary influences. If there’s one thing I’ve learned about my trips to the box office, it’s this: if the critics bash something I’m eager to see, chances are, I’ll walk away having discovered a new favorite cinematic masterpiece. That same effect is true of this film. The Huntsman is a complex and intricate fairytale bursting with dark enchantments and gorgeous details. It’s a fun way to kick off the summer box office adventures. 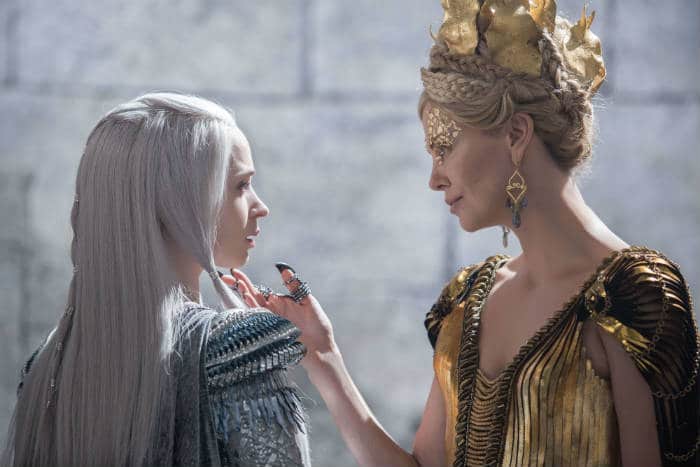 When the promotional material was first released, I’ll confess, I was confused. I didn’t know if this was a sequel or prequel, the latter being what I felt the promotion might have been suggesting. Add in the fact that Kristen Stewart’s Snow White (Sam Claflin briefly reprises his role) was to be absent, and I was all the more convinced. If you’re anything like me (who isn’t all that fond of going back in time when you’ve already experienced the future), I’m clarifying that The Huntsman is a unified balancing act (done well) of playing both sides to one story. “Part one” shows us how Eric came to be The Huntsman before act two transitions into the events following Snow White and the Huntsman. If you liked the romantic teasers in that film, then the direction this story takes might disappoint.

Shifting to the production, “Winter’s War” is breathtaking down to the final detail. Colleen Atwood’s (Alice in Wonderland, Into The Woods, and even Arrow) costume design further enforces why she’s an Oscar winner; the details and unique designs are stunning. This theme is carried through every production aspect, from the lush detail-inspired forest, Snow White and the Huntsman is the humor; it runs throughout this script (co-written by Evan Spiliotopoulos, one of the upcoming live-action Beauty and the Beast’s screenwriters), offering plenty of levity and room to breathe amidst the darker throes of magic. 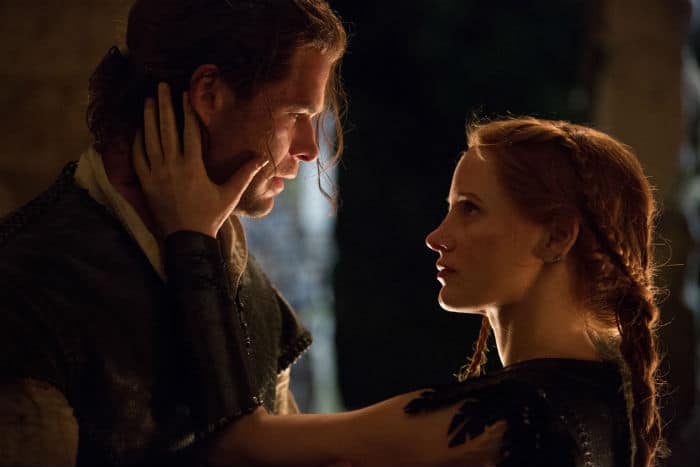 Given the new Director and screenwriters, this film does take on a vastly different feel. I could go on about things I liked, including how the story is ultimately written (the method in which the evil is vanquished which ties into the story arc that is about these two sisters), the cast (I always welcome the chance to see Aussie Chris Hemsworth in a leading role), the elves (who were hilarious!) or the production qualities, but I won’t. As the narrator closes this story saying, all good fairytales never really end, and I feel it prudent to follow his advice and end with this: if you like fairytales, give The Huntsman a fair chance. It’s a delightful mixture of genres, which is what makes it such fun.

If you were a fan of films like Hansel and Gretel: Witch Hunters or Mirror Mirror, you’re likely going to enjoy The Huntsman.

Content warning: The Huntsman has a smattering more “adult” content than Snow White and the Huntsman. There are two love-making scenes; one involves a couple naked (implied) swimming and passionately kissing, the other has them kissing while undressing one another (they remove their shirts) and barely avoided upper female nudity before the camera cuts away. There is plenty of fantasy violence scattered throughout. The film is rated PG-13.

Our romance-themed entertainment site is on a mission to help you find the best period dramas, romance movies, TV shows, and books. Other topics include Jane Austen, Classic Hollywood, TV Couples, Fairy Tales, Romantic Living, Romanticism, and more. We’re damsels not in distress fighting for the all-new optimistic Romantic Revolution. Join us and subscribe. For more information, see our About, Old-Fashioned Romance 101, Modern Romanticism 101, and Romantic Living 101.
Pin this article to read later! And make sure to follow us on Pinterest.
By Rissi JC on April 26th, 2016

12 thoughts on “The Huntsman: Winter’s War – An Enchanting Dark and Romantic Fairytale”