Official Synopsis for Hunted: Beauty knows the Beast’s forest in her bones—and in her blood. Though she grew up with the city’s highest aristocrats, far from her father’s old lodge, she knows that the forest holds secrets and that her father is the only hunter who’s ever come close to discovering them.

So when her father loses his fortune and moves Yeva and her sisters back to the outskirts of town, Yeva is secretly relieved. Out in the wilderness, there’s no pressure to make idle chatter with vapid [baronesses]…or to submit to marrying a wealthy gentleman. But Yeva’s father’s misfortune may have cost him his mind, and when he goes missing in the woods, Yeva sets her sights on one prey: the creature he’d been obsessively tracking just before his disappearance.

Deaf to her sisters’ protests, Yeva hunts this strange Beast back into his own territory—a cursed valley, a ruined castle, and a world of creatures that Yeva’s only heard about in fairy tales. A world that can bring her ruin or salvation. Who will survive: the Beauty, or the Beast? 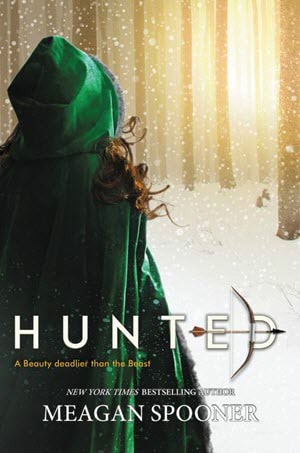 Fans of Beauty and the Beast stories will adore this magical re-telling of a classic fairy tale. True to the original story, Hunted ups it’s appeal factor by bringing in Russian folklore. Instead of a Gaston, you have……Yeva? Yes! While the original Beauty was never a damsel in distress, Yeva is in a class all by herself. She is fearless, more at home in the woods with a bow in hand than in a ballroom. Yeva is a true hunter. She feels every beat of the hunt in her blood. It’s where she truly feels most herself. However, despite her relief to be back near the Beast’s forest, a longing remains within Yeva. Moreover, Yeva is independent. She’s the type that takes charge. At first, when her father goes missing, Yeva waits. But, deep down she knows that to wait is to lose her father.

What further drives Yeva is longing. There is a part of her that longs for something. She cannot name it but knows she is missing it. Hunted explores this want within Yeva. This want to discover who she is, and who she is becoming. It is this desire that Yeva begins to understand in the Beast’s magical realm. In the Beast himself.  Through the retelling of tales from her childhood, to the battles she must fight in the realm, she discovers the truth of this want. Ultimately, this want drives Yeva to her destiny.

Meagan Spooner deftly captures the reader’s interest and holds it fiercely from beginning to end. Her writing is delicate. Haunting, even. Spooner weaves a story of a warrior; a fierce hunter who begins to see that there is a Beast within us all. A rich, vivid retelling, Hunted is a must-read for fans of fairy tales and fantasy stories.

Oh, this is a tough one. I would love to see this vivid world come to life. Only, I think there already are plenty of Beauty and the Beast type movies and shows. Not to mention Disney’s live-action Beauty and the Beast is still relatively fresh in peoples minds. It is inevitable audiences would compare the Beasts’ worlds.  Nevertheless, Hunted would be a feast for the eyes. However, I think for right now, Hunted remains best within the pages of a book. But…..ask me again in a few months!

Side note: Do not let the romance rating below mislead you. There is a beautiful romance in Hunted. However, it is not the focus of the story. Yeva and her journey are the focus. If I were to rate the relationship that Yeva comes to have with herself, there would not be enough hearts to award! Still, the relationship between Yeva and Beast is a lovely compliment to Hunted.

Have you read Hunted? What did you think? What was your favorite part of the book?

Content Warning: None, except you will not be able to put this book down!

HarperTeen published Hunted in March of 2017.

Our romance-themed entertainment site is on a mission to help you find the best period dramas, romance movies, TV shows, and books. Other topics include Jane Austen, Classic Hollywood, TV Couples, Fairy Tales, Romantic Living, Romanticism, and more. We’re damsels not in distress fighting for the all-new optimistic Romantic Revolution. Join us and subscribe. For more information, see our About, Old-Fashioned Romance 101, Modern Romanticism 101, and Romantic Living 101.
Pin this article to read later! And make sure to follow us on Pinterest.
By Catherine on August 9th, 2018