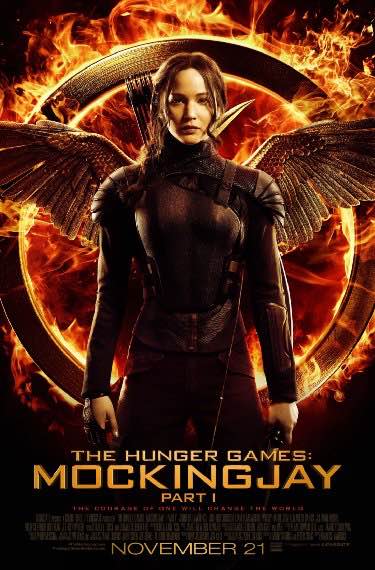 I must admit that I was less impressed with this installment of the Hunger Games Trilogy than I have been in the past. The pace in this film is much slower paced than the other two. If I’m being totally honest, what occurred in this two-hour film could have been fit into 45 minutes. I don’t think it was a wise choice to split the movie into two sections. The final book of the trilogy was not naturally designed to be broken into two segments, and I think we are really seeing the greed of the movie industry rear its ugly head in this case. While the first two movies have kept us on the edge of our seats due to action and suspense, this third film does not really deliver in that area. That being said, I still enjoyed being reunited with our favorite mockingjay and her cohorts.

In this third installation of the Hunger Games saga we meet Katniss in District 13 where the President Coin, played by Julianne Moore, is trying to convince her to become “the face of the revolution,” their mockingjay. After agreeing to become the Mockingjay, and some haggling over certain conditions, the film spends most of it’s time focusing on the promos Katniss must film, which will be broadcast all over the districts for fellow revolutionaries to see. This proves to be a problem as our dear Katniss unfortunately does not possess the same acting talent as her actress, Jennifer Lawrence.

Thanks to a clever Haymitch, however, the crew realizes that in order to get a good shot of Katniss they must follow her into battle where she is most natural and comfortable. By doing so they catch a breathtaking scene of Katniss speaking to the people and President Snow after a devastating bombing raid on the hospital in District 8. And thus our story begins.

In a heartbreaking twist, Katniss must now also deal with the supposed betrayal of Peeta. Through interviews with Caesar Flickerman Katniss witnesses a clearly brainwashed Peeta warn her against civil war and plead with her to end the violence. We know that Peeta was taken by President Snow, but we are not sure of what they have done to him. Was he tortured? Drugged? All this Katniss must struggle with as she fights to free the districts from the iron fist of President Snow.

One thing fans may not be used to is the primarily inside set of the film. Rather than the lush forests and tropical landscape that we’ve come to know from past movies, this film is set mostly inside District 13’s bunker underground. We do get a few snippets of the outside world, but not anything nearly like the first or second movie. It will be interesting to see what fans make of this change.

While we are briefly reunited with our old friends Haymitch, Effie, and Finnick, more time is spent with now characters such as President Coin. This installment brings in a whole new slew of characters for us to get to know. Due to this fact, we do lose some scene time with old characters in order to make way for the new. We only get short bursts of time with characters like Haymitch and Effie, two of my favorites. However, Elizabeth Banks still manages to steal a bit of limelight during her time onscreen. We get to Effie for the first time out of her fantastical costumes and wigs. Julianne Moore also stands out as a top-notch actress in this movie. She plays President Coin with much grace and wisdom. We now have a good president to balance out the evil machinations of President Snow. Speaking of him, I just have to put in that Donald Sutherland was brilliant as usual. His portrayal of Snow is perfectly balanced and reveals just the right mixture of evil in his character.

Overall, despite it’s tendency to drag just a tad, the movie is definitely worth seeing, especially if you’re a Hunger Games fan. And just think. The next time we see all these characters it will be time for revolution, so a little meandering is understandable.

Our romance-themed entertainment site is on a mission to help you find the best period dramas, romance movies, TV shows, and books. Other topics include Jane Austen, Classic Hollywood, TV Couples, Fairy Tales, Romantic Living, Romanticism, and more. We’re damsels not in distress fighting for the all-new optimistic Romantic Revolution. Join us and subscribe. For more information, see our About, Old-Fashioned Romance 101, Modern Romanticism 101, and Romantic Living 101.
Pin this article to read later! And make sure to follow us on Pinterest.
By Rebecca Lane on December 5th, 2014