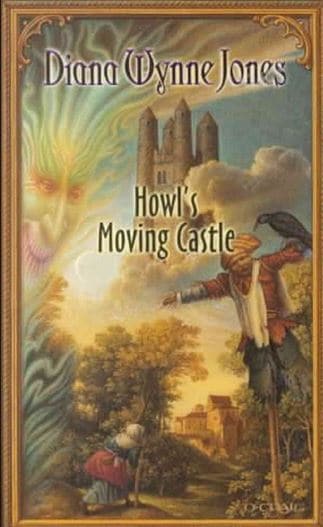 I have to be honest, this is one of the few times that I have ever picked up a book because I loved the film. “Howl’s Moving Castle” was one of the first Studio Ghibli films that I saw and when I learned that it was based on a book by Diana Wynne Jones, I got excited. I had also previously read the sequel, “Castle in the Air,” not realizing it was a sequel. “Howl’s Moving Castle” is a book that has gotten a lot of buzz, both because it’s a widely loved fantasy and because it’s the basis for a Ghibli film. Finally, I decided that I needed to read the book itself to form a balanced opinion. I was not disappointed, and felt that Jones took me on an adventure that was both a typical fantasy and a very atypical adventure story, peppered with a sense of humor.

Howl’s Moving Castle is set in the land of Ingary, and follows Sophie Hatter, a young woman who lives in the town of Market Chipping. This book also includes one of the best opening lines that I have ever encountered in a book, “In the land of Ingary, where such things as seven-league boots and cloaks of invisibility really exist, it is quite a misfortune to be born the eldest of three.” This line both sets up the land as a place of magic and provides an introduction, of sorts, to our heroine. Sophie, of course, happens to be the eldest of three children, and as a result, she is willing to quietly fade into the background to allow her more talented sisters to shine. Of course, as in any good fantasy, there is more to Sophie than meets the eye.

While Sophie is working in the hat shop in Market Chipping, a mysterious castle that moves on its own appears in the surrounding county; the castle of the dreadful Wizard Howl. Howl has a reputation for kidnapping young girls and stealing their hearts. At first, it is believed that his is literally stealing hearts, and as a result, the entire town is in fear of him. As the story unfolds, however, readers learn that while Howl is dangerous to young women, it’s because he tries to figuratively steal their hearts. Once they fall for him, he loses interest and the girls are left heartbroken.

Through a case of mistaken identity, Sophie is cursed by the Witch of the Waste, a powerful witch who had been jilted by Howl and is intent on revenge. Sophie finds Howl and moves into the castle as the cleaning lady, hoping to break the curse. While there, she meets a cast of colorful characters including Howl’s apprentice Michael, Calcifer, a fire demon who agrees to break Sophie’s curse if she breaks his contract with Howl, and the people who come to Howl for magical assistance through the castle’s door, that allows Howl and his friends to go to different locations in the various worlds.

One of the people seeking help from Howl is the King of Ingary, who is looking for the Wizard Suliman, and his brother Prince Justin, who disappeared while searching for Suliman. The event that started the disappearances was a confrontation that the King had with the Witch of the Waste, who is still searching for Howl.  Being in hiding, and trying to pretend that he’s not actually a good guy, Howl is reluctant to help. Despite that, he continues to work behind the scenes. All of Sophie’s attempts to help both Howl and the other characters consistently makes things more complicated, as does her discover that she has magical powers of her own.

The characters are complex and real, each with their own flaws and conflicts. Sophie is brash, tending to rush into situations without really thinking things through, while Howl is vain and a little bit selfish. Calcifer is powerful but unable to do anything on his own because of his bond with Howl. This is a bond that scares them both, because the pairing of magical person and fire demon has, historically in this world, ended very badly for both parties.

As you read, however, and as Sophie’s own magical abilities becomes more apparent, you begin to wonder if there is more depth to Sophie’s feelings. Howl later calls her out on her apparent jealousy, but it’s a very subtle character change in her. It was believable, but I feel like a little more of Sophie’s internal monologue would have made it even more obvious.

In the end, their relationships are what allow our flawed but still lovable characters to triumph over their adversaries. I don’t want to spoil too much, but Howl’s Moving Castle puts an emphasis on the importance of relationships between people; romantic, student/teacher, sibling or friend. These relationships are at the core of the story, affecting what the characters do and how they react to different situations.

The other thing that stands out is the realization that there is often more to people than meets the eye. Sophie, to Howl, is at first just an old, brash and interfering, cleaning lady. Howl, to Sophie, is just a very powerful and vain man who pouts a lot. As they interact, they learn that while they were both right about each other in part, they are both much more than those impressions. In some cases, they even underestimated themselves.

Overall, if you’re looking for a fun and engaging YA book to read this summer, something full of adventure, romantic, humor and magic, check out Howl’s Moving Castle and the two sequels, Castle in the Air (no relation to the Ghibli film) and House of Many Ways. Maybe include a Studio Ghibli marathon while you’re at it. You (probably) won’t be disappointed.

I have to be honest; I think that any adaptation will be held against Miyazaki’s film, and maybe because of that, it should be left alone. I read some interviews with the author and while she acknowledges that changes were made, she doesn’t seem to have major problems with them. Although she mentioned that her characters were less heroic and noble than those in the film and she had characters that were legitimately evil, she seemed to understand that film and book are two different mediums and changes had to be made. Either way, she put her stamp of approval on the film, and when an author approves, I feel like I really can’t argue with that.

What do you think? Would another adaptation, maybe with all three books included, be okay? Did you believe Howl and Sophie as a couple?

Our romance-themed entertainment site is on a mission to help you find the best period dramas, romance movies, TV shows, and books. Other topics include Jane Austen, Classic Hollywood, TV Couples, Fairy Tales, Romantic Living, Romanticism, and more. We’re damsels not in distress fighting for the all-new optimistic Romantic Revolution. Join us and subscribe. For more information, see our About, Old-Fashioned Romance 101, Modern Romanticism 101, and Romantic Living 101.
Pin this article to read later! And make sure to follow us on Pinterest.
By Bailey Cavender on July 13th, 2015