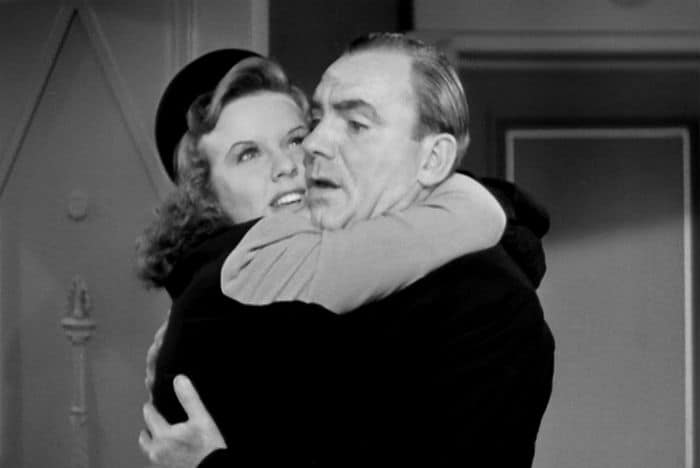 There’s nothing that can quite match the 1940s “screwball” comedy like that of Deanna Durbin’s His Butler’s Sister. If we find our 21st-century RomCom themes implausible, then we need only look to this era where today’s cinema found its blueprints.

His Butler’s Sister tells the story of Anne Carter (Deanna Durbin), a young small-town woman who travels to New York where she believes her brother Martin (Pat O’Brien) is living. Furthermore, she believes Martin, the half-brother she hasn’t seen in many years, is living a life of luxury in a posh high-rise apartment. Once there, she discovers that her brother is actually the butler of a well-known composer. Turns out, his employer is Charles Gerard (Franchot Tone) whom Anne has been longing to meet. You see she has dreams of becoming a famous singer.

Complications arise when her brother prevents her from singing for his boss, and Anne catches the attentions of the many butlers her brother knows. (All of whom also work in the same apartment building!).

A madcap, zany adventure is in store and in place for the interested audience of His Butler’s Sister, all of which is set to play out as the story progresses. From the moment Anne arrives at the apartment (she assumes is Martin’s) to the swoony conclusion, His Butler’s Sister is classic 40s hilarity. All of the usual concepts and elements are in place as these characters, in the usual fashion, madcap through a curious set of circumstances. While the bigger story arc (Anne’s dream of stardom) is entertaining, what I loved best are the subplots. Anne being pursued by a string of suitors, for example, is hilarious as were the toe-to-toe arguments between Anne and Martin. In particular, the misunderstandings that ensue from the latter are comic gold, and Durbin along with her costars play them to perfection.

Because of this, the classic “Comedy of Errors” style is present as this story progresses towards its ultimate truth-seeking conclusion. The one tiresome trope the script overplays one time too many are the (frequent) barriers that crop up in pursuit of the characters chasing their happy ending.

The romance in His Butler’s Sister is perfectly lovely though don’t expect any great depth. It’s more about the couple finding instant love than it is about meaningful and multifaceted characterization. That said, none of this is off putting because this is the kind of genre the era embraced. All of which are accomplished with great ease.

Those of us who enjoy romcoms from a simpler time will love watching His Sister’s Butler or any of Deanna’s charming comedies. They’re, quite simply, sweet and fall into the quintessential film style of the era with memories lasting beyond this.

What do you think of His Butler’s Sister? Sound off below…

Check out more of our Vintage Reviews. Including our reviews of Roman Holiday starring Audrey Hepburn, I Was a Male War Bride with Cary Grant or the classic musical Oklahoma!

Our romance-themed entertainment site is on a mission to help you find the best period dramas, romance movies, TV shows, and books. Other topics include Jane Austen, Classic Hollywood, TV Couples, Fairy Tales, Romantic Living, Romanticism, and more. We’re damsels not in distress fighting for the all-new optimistic Romantic Revolution. Join us and subscribe. For more information, see our About, Old-Fashioned Romance 101, Modern Romanticism 101, and Romantic Living 101.
Pin this article to read later! And make sure to follow us on Pinterest.
By Rissi JC on July 17th, 2016