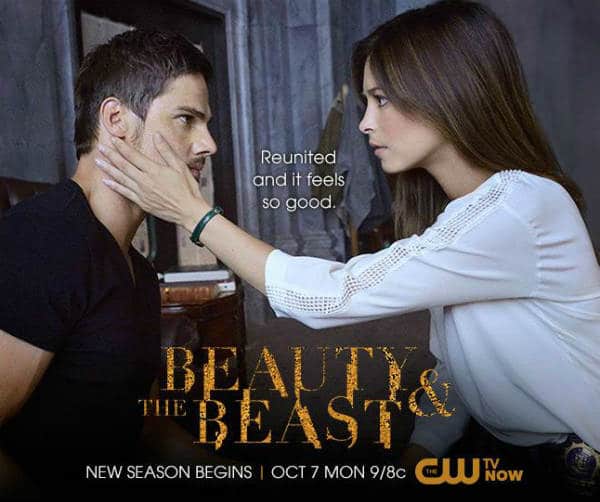 In celebration of the return of CW’s Beauty and the Beast tonight, I thought I’d take the time to spotlight the series by sharing all of our previous videos on the show as well as to remind everyone why it’s worth watching (and if you left, why it’s worth giving a second chance).

Despite the cult following it’s already picked up, the audience did taper off the second half of the series. Perhaps it was the fact that Vincent and Catherine arguably got together too soon killing the build up and tension for some. OR perhaps there were too many domestic conversations for other people’s liking. Personally, if I’m going to watch a beast, I want him beasting out and running through the city to save Beauty just in the nick of time in epic form. I don’t want the Beast talking about laundry. So how do the writers get the viewers back and then some?

No one can deny the onscreen chemistry between Jay Ryan and Kristin Kreuk and that there were many elements about the series that worked. It just needed a little bit of tweaking! Now, as much as I enjoyed the first season there were some weak moments despite how entertaining it was. And they must be fixed so the show will do well in its second season to get picked up for a third! Trust me Beasties we all want the same thing.

Good news, though, with creators and Executive Producers Jennifer Cooper and Sherri Levin now teamed up with a new writing group, the show seems to have found its voice as well as its footing. So why should you watch if you haven’t already? And why should you return if you left?

First off, here’s the official description of the first episode of season two:

“Three months after Vincent Keller (Jay Ryan) was abducted by Muirfield, Detective Catherine Chandler (Kristin Kreuk), is reunited with him – but not in the way she planned.  He’s changed:  his scar has disappeared, his memory has been wiped clean and he returns as a supercharged beast on a mysterious mission.  Catherine needs to unravel the reasons behind Vincent’s change if she has any hopes of recovering their epic love, while also trying to solve the secrets that swirl around her own life.  Also starring Nina Lisandrello, Austin Basis and Sendhil Ramamurthy.  Stuart Gillard directed the episode written by Brad Kern.”

Also, I’ll give you a few reasons to tune in and it may be a little bit spoilery so you’ve been warned!

1)      Brad Kern from CHARMED, yes CHARMED has joined as co-executive producer and wrote the season two premiere. The writer in charge of the Phoebe/Cole plot has joined the team. I’ve seen the first episode of season two and he doesn’t disappoint. The series feels much more urban, and the characters are back on track (especially Gabe). And I don’t want to spoil for those who haven’t seen it yet, but Catherine and Vincent finally have a type of scene together that NEVER happened in the first season. For that, I thank Brad Kern.

2)      The revamping of the Beast. He’s much more lethal now. You can actually understand why people would be frightened of him. He’s definitely a beast, a real “monster” so if you were on the fence about how much of a beast he was before, you shouldn’t have a complaint now. You know, unless you really want him to look like an animal 100% of the time like the 80s series (which I do also like by the way).

3)      Eric Tuchman has also joined the producing/writing team. He was one of the executive producers behind the very entertaining series Kyle XY. You can already see some clever weaving of conspiracy written into season two that is reminiscent of Kyle XY. It should give season two a stronger hook. The most romantic shows, in my opinion, don’t just focus on the romance. The mythology needs to be just as strong. Moonlight did this fabulously with the vampiric French Revolution connection as did The X-Files with the whole alien conspiracy. It looks like Beauty and the Beast will really be picking up a strong mythology this season, which will only continue to strengthen the show as a whole as well as the romance.

4)      The soul connection between Vincent and Catherine is being focused on more. I think that’s all I have to say about that!

5)      No more weak procedural stories to weigh the story (like the first half of season one) down or even complete lack of detective work that hurt the second half of the season. Season two so far seems to have found a healthy balance.

Overall, the writers have figured out what worked in season one, what didn’t and found just the right mix. I think most people will be really pleased with it. I know I was. I only hope to see more connections to the original roots of the archetypal Beauty and the Beast story as well as to various adaptations of it over the years. I love when shows pay homage to what came before.

With that all said, I thought I’d share all of the videos Autumn and I made about the series; five in total. So enjoy! We had a blast making them.

Once – Beauty and the Beast – Vincent and Catherine

Vincent and Catherine have both suffered tragedies that have left them depressed and alone. Now that they are finding each other perhaps they will begin to feel “real” again. The video focuses on the pilot.

Song: Once by Bradley Caleb Kane (We heard this song and thought it fit the series perfectly!)

Extraordinary Way – Beauty and the Beast – Vincent and Catherine

Cat & Vincent have lost a lot in this world but the one thing they have is each other. As Cat enters an extraordinary new world, she begins to see beauty in the beast who saved her.  The video focuses on the first two episodes but also includes a few shots from the episode 3 promo.

Song: Extraordinary Way by Conjure One

Tears of an Angel – Moonlight and Beauty and the Beast

Crossover video about the comparative themes/stories between Mick and Beth from Moonlight and Vincent and Catherine from the new Beauty and the Beast. Mick and Vincent are like dark guardian angels protecting the women they love.

Song: Tears of an Angel by Ryan Dan

Wherever You Will Go – Beauty and the Beast – Vincent and Catherine

A romantic video about Vincent and Cat from the new series Beauty and the Beast. They will follow each other anywhere no matter the obstacles (like him being a beast). The video features clips from the first nine episodes.

Song: Wherever You Will Go by Charlene Soraia

Stay – Beauty and the Beast – Vincent and Catherine

This is our fifth video about Catherine and Vincent.  It focuses on Catherine’s fear that she is losing Vincent to someone else. If she takes a chance, will he choose her? Will he stay with her?

Song: Stay by Michelle Featherstone (We heard it on an episode of Alias)

Classic Romantic Moment of the Week: Vincent and Catherine

Our romance-themed entertainment site is on a mission to help you find the best period dramas, romance movies, TV shows, and books. Other topics include Jane Austen, Classic Hollywood, TV Couples, Fairy Tales, Romantic Living, Romanticism, and more. We’re damsels not in distress fighting for the all-new optimistic Romantic Revolution. Join us and subscribe. For more information, see our About, Old-Fashioned Romance 101, Modern Romanticism 101, and Romantic Living 101.
Pin this article to read later! And make sure to follow us on Pinterest.
By Amber Topping on October 7th, 2013