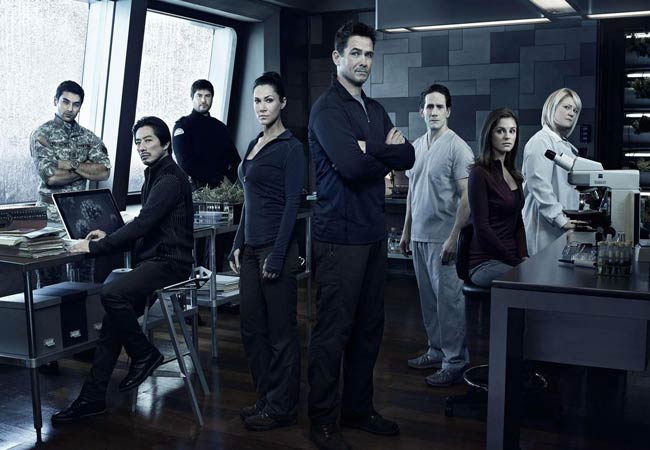 WHERE: SyFy; Season one Available on Netflix

For one reason or another, I didn’t watch Helix when it first premiered on Syfy. Perhaps I thought a virus outbreak on a small, isolated compound sounded dull and uninteresting? Whatever my reasons for not tuning in, I finally discovered Helix on Netflix and binged through all 13 episodes in a week. About 3 or 4 episodes in, I was hooked.

In a story about survival, a group from the CDC arrives at an Arctic research facility to face a virus they’ve never seen before, a virus that has almost zombie like qualities (probably my least favorite aspect of the show) and has the potential to harm the entire human race if it got out. The team consists of Alan (played by the always charismatic Billy Campbell), Sarah (Alan’s young protégé who also has a thing for him and a secret of her own), Julia (Alan’s ex-wife who cheated on him with his brother), Doreen (Alan’s snarky friend and co-worker), and Major Sergio Balleseros (a man that is not who he seems). Once at the research facility, we meet the mysterious man who runs the place, Dr. Hiroshi Hatake (the most fascinating character of the show), his adopted and very loyal son Daniel, and Alan’s brother Peter who is infected by the virus. That’s the real reason Alan’s team was chosen: because it seems his own brother doesn’t have long to live. They have to find a cure and fast.

The story starts just as I imagined it, with the scientists arriving at the facility and beginning their research. Nevertheless, this isn’t your typical stop the virus kind of story. Without giving too much away (as I think the reveals can be pretty cool and intriguing), I can say that once the show starts to reveal hidden conspiracies and more fantastical elements (yes I do mean fantasy), the mythology becomes rich and all the more compelling. Even the characters really start to come together. If you find the first few episodes slow, stick with it because the show really does get exciting. Also, if virus shows aren’t your thing, there is a lot more to this story than just a virus; a lot more. Trust me on this one.

When it comes to romance, there are few to possibly become invested in. First, you have Sarah and Alan (though at times she seems a little young for him); then you have Alan and his ex-wife Julia versus Julia and Peter. These stories are interesting for sure, but the love story I became most devoted to is a story that doesn’t begin until half way through the season between Sergio and an Inuit woman named Anana. The whole redemptive quality to their relationship really felt authentic and beautiful. I’m hoping for more in season 2…

As a whole, Helix has to be one of the most underrated new shows this past season. With excellent writing, good characterization (particularly with Hatake), characters to be invested in, and plot twists to keep you coming back for more, Helix is a show well worth taking a look at. And even though the season ends on a cliffhanger, the good news is that season 2 begins tonight so you won’t have to wait! My advice: catch up before the end of the new season and give this lesser known series a chance to continue…

Content Note: The series claims to be TV-PG but is much closer to TV-14. A couple of the episodes even lean toward TV-MA.

Our romance-themed entertainment site is on a mission to help you find the best period dramas, romance movies, TV shows, and books. Other topics include Jane Austen, Classic Hollywood, TV Couples, Fairy Tales, Romantic Living, Romanticism, and more. We’re damsels not in distress fighting for the all-new optimistic Romantic Revolution. Join us and subscribe. For more information, see our About, Old-Fashioned Romance 101, Modern Romanticism 101, and Romantic Living 101.
Pin this article to read later! And make sure to follow us on Pinterest.
By Autumn Topping on January 16th, 2015