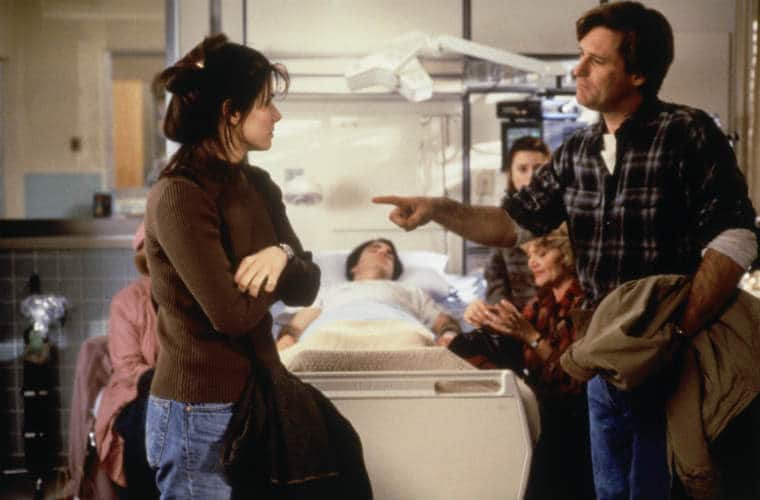 While you were Sleeping is one of my all-time favourite Christmas films. On the surface, it’s just your archetypal seasonal rom-com, but for me, there’s definitely something special about it. Released in the nineties, it’s in a similar vein to Nora Ephron classics like Sleepless in Seattle or You’ve Got Mail: warm and verging on the sentimental, but with plenty of understated humour and likable leads. 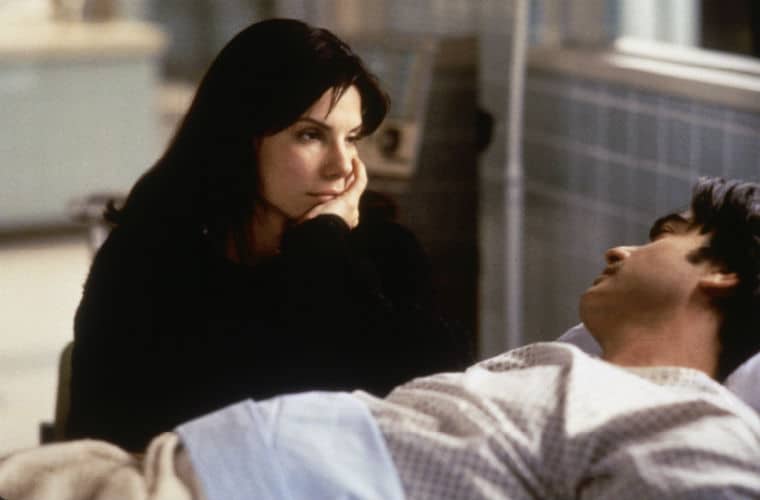 Sandra Bullock plays Lucy, a lonely young woman with no family of her own to spend Christmas with, who finds herself entangled with someone else’s when she saves the life of the eldest son, Peter (Peter Gallagher) who ends up in a coma. Due to a misunderstanding at the hospital, the Callaghans believe Lucy is Peter’s fiancée and the more deeply she becomes involved, the more she struggles to tell them the truth. Things don’t get any easier when she begins to fall for the younger brother, Jack (Bill Pullman).

One of the things I love about this film is that Bill Pullman gets to play the leading man – as opposed to the nice guy who’s due to get dumped by the end of the film (see Sleepless in Seattle). Here he’s still playing the nice guy, but the film plays around with the idea of Pullman not being a traditional hero. Peter is the tall, dark and handsome one, the older son, rich with a glamourous lifestyle and the one Lucy imagines herself in love with at first sight. I think Jack is supposed to be a bit of an everyman, but he’s much too lovely for that. He’s possibly my favourite leading man in rom-com history, and his chemistry with Sandra Bullock is off the charts. 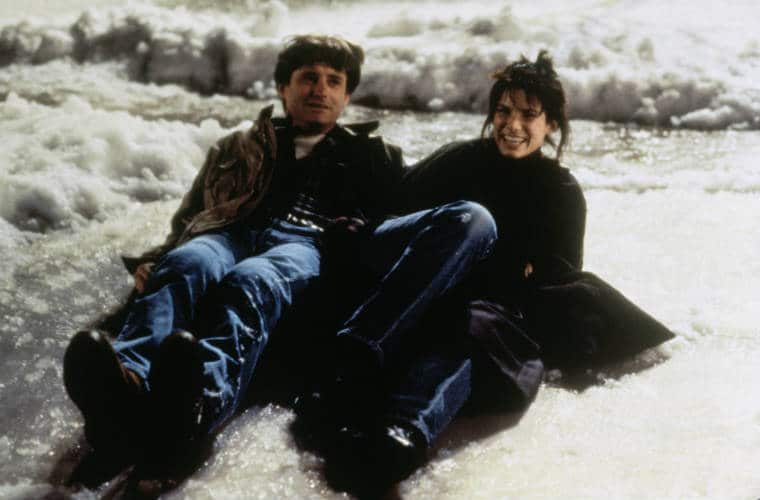 She’s lovely too, unassuming and sweet, but there’s nothing sickly about either her or the romance that blossoms between the couple.  They’re both funny and dry, they don’t take themselves too seriously, but you can see that they’re serious about each other. What makes the situation really interesting, though, is that everything’s under the surface. Neither of them can admit they like each other because she’s supposed to be engaged to his brother – but we can see the attraction between them right from the off.

Aside from the romance, this film is about family, and I love the Callaghans. From Glynis Johns’ grandma (Mrs. Banks from Mary Poppins) to Peter’s godfather, Saul (Jack Warden) who keeps a particular eye on Lucy as another adoptee into the clan, they’re great fun and realistic as a depiction of a loving family. I love the confused conversations they have at dinner – I’ve had many a conversation like that in my own house. As a side note, it makes a nice change to see a Catholic family depicted as nice and normal.

While you were Sleeping might move at a slower pace than a lot of rom-coms today, it might not be particularly edgy or different, but it’s funny and warm and romantic. It might not have been as good without such a great cast, but the chemistry between the leads and the comradery among the family give it any extra sparkle that it might have needed.  The end always gets me a bit teary, and although I won’t spoil it for you, that final scene in the booth might be my favourite ever scene of its kind. As a feel-good Christmas romance, I would definitely recommend While you were Sleeping. As romantic comedies go, it’s one of the best. 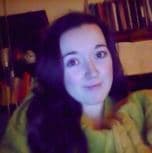 Hails from Merseyside, England. Loves period dramas, Harry Potter and Marmite on toast. Blogs about adaptations at http://basedonthebook.blogspot.co.uk/ and random rubbish at   http://whenitdoes.blogspot.co.uk/.

Our romance-themed entertainment site is on a mission to help you find the best period dramas, romance movies, TV shows, and books. Other topics include Jane Austen, Classic Hollywood, TV Couples, Fairy Tales, Romantic Living, Romanticism, and more. We’re damsels not in distress fighting for the all-new optimistic Romantic Revolution. Join us and subscribe. For more information, see our About, Old-Fashioned Romance 101, Modern Romanticism 101, and Romantic Living 101.
Pin this article to read later! And make sure to follow us on Pinterest.
By The Silver Petticoat Review on December 14th, 2016

11 thoughts on “Guest Review: While You Were Sleeping – A Rom-Com Christmas Classic”