I write character-driven fiction, and some of my favorite books – no matter the genre or setting – seem to keep their pages turning by the whims of their characters alone.

Austen’s heroines, even the ones we may not love as much as the others, are nevertheless real, flawed, and enchanting, and there are almost certainly essential digits I’d sacrifice to spend an hour in their company.

It got me to thinking, especially after hearing another author describe what her cast of characters would watch on television, what the Bennets and the Dashwoods, among others, might have in their Netflix queue.

Fanny gets shafted, frankly, for being among Austen’s more timid heroines, but the girl has got a core of iron. Despite being intimately aware of the reality of her station in life, and the unflagging attention of a handsome if morally ambiguous dude, she remains true to who she is and what she hopes for herself. Of all of the Austen heroines, I think she’s the only one who could watch Call the Midwife without suffering an anxiety attack. 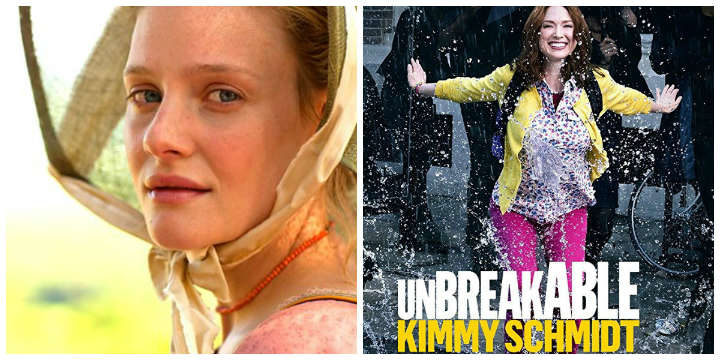 Kimmy is a fixer, and I would argue that Emma is too. Kimmy’s unfailing optimism and charming naivete are impossible to resist – and I suppose that is what encourages me to forgive Emma’s flaws too. She’s happy and she wants everyone else to be happy. She’ll do whatever it takes to make it happen, no matter how many times she has to count to ten. 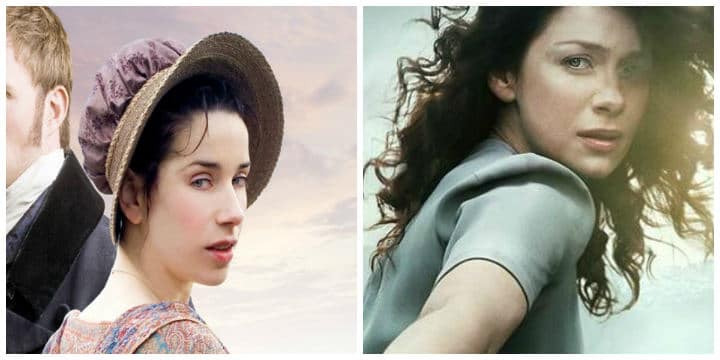 Claire Fraser is good at waiting, and Anne Elliot is too. I think their equal toughness and passion would appeal greatly to each other, and there’s just such romance in their lives that I feel confident Anne would binge-watch in the hopes of seeing a happy ending for Claire akin to her own. 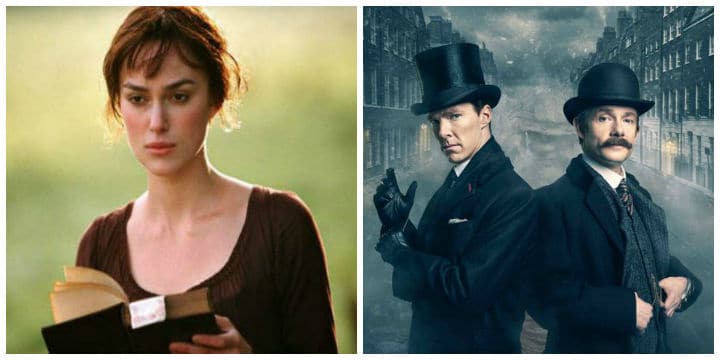 Sherlock’s wit and Holmes’ heart would keep Lizzie tuning in, and I think she’d not-so-secretly crush on Mary. And of course, the rich storytelling and puzzle-solving will allow her to convince herself that watching is an intellectual pursuit.

Marianne Dashwood – Once Upon a Time 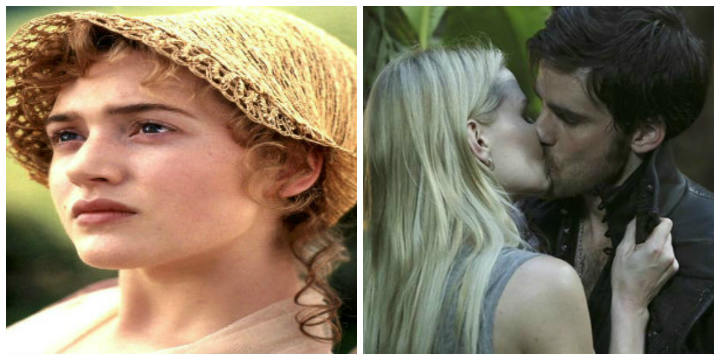 What’s more romantic than a fairy tale? Marianne won’t be fussed by continuity errors or bosom-heaving dramatics so long as there’s a prince to be had in the end. 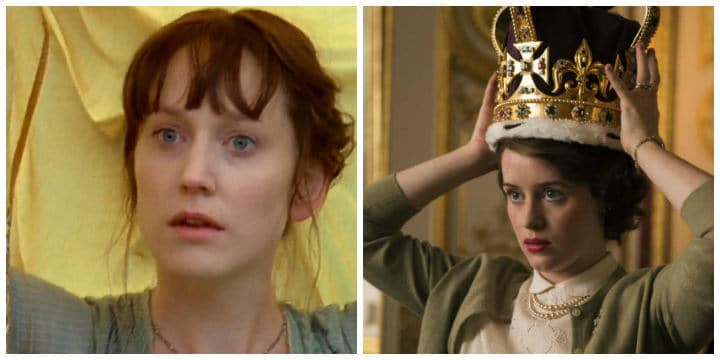 A quintessentially English drama for a quintessentially English heroine. Elinor’s emotional depths ultimately reveal a passion and heart as wild as her sister’s – but how she chooses to act, to rein herself in, to be in control for the sake of others, makes her an incredibly endearing character. She shares that reserve, that just-under-the-surface fire, with Queen Elizabeth. 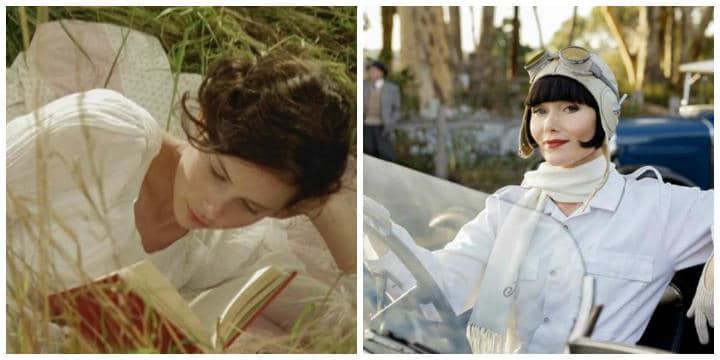 Headstrong Catherine would definitely aspire to the intrigue and independence of Miss Phryne Fisher. Solving thrilling murders at the side of the dashing and gentlemanly Detective Inspector? Yes, please.

And while I know they aren’t the primary protagonists, I can’t imagine Pride & Prejudice without the Bennet sisters, and so, bonus round! 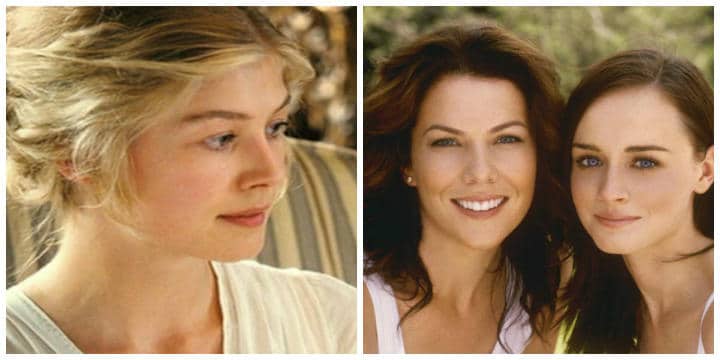 Lorelei might make her blush but the inherent goodness of Stars Hollow and its inhabitants is just the sort of retreat Jane would appreciate. As for who she thinks Rory ought to end up with, I can’t say.

I’ll admit – this is the only show I’ve mentioned that I haven’t watched. But I feel like I’ve heard enough about it – and I know Lydia and Kitty well enough – to hazard a guess that they would be obsessed. 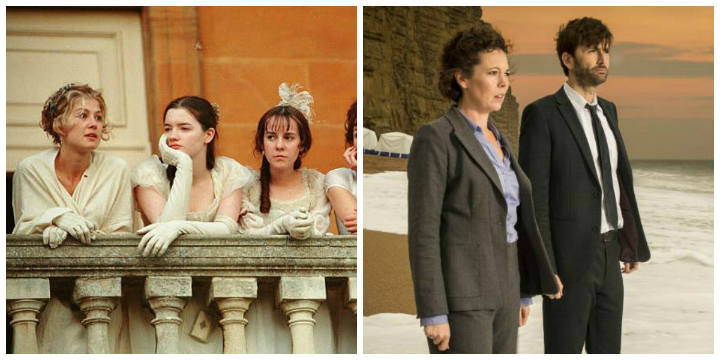 Maybe I’m giving Mary too much credit with this one, but a serious-minded sister needs a serious-minded drama. She might congratulate herself on not having made such egregious errors in character judgment, though. Insufferable.

Now, it’s your turn! What do you think would be on the Netflix queue of Jane Austen Heroines? 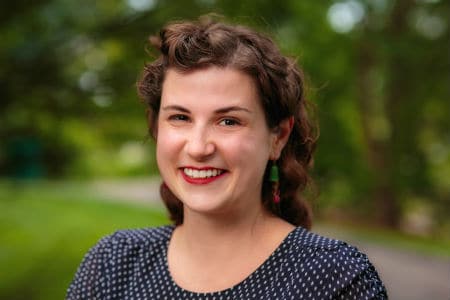 Jillian Kuhlmann is the author of The Hidden Icon and The Dread Goddess, the first two books in the Book of Icons high-fantasy series. As a girl, Jillian preferred writing stories to admitting that there wasn’t any such thing as fairies or actually mustering up the courage to talk to boys. She maintains an untidy house, a husband, two baby girls, and a wicked costume collection in Cincinnati, Ohio. You can visit her website or follow her on Twitter @jtotheill for more musings and jokes in questionable taste.

ABOUT THE HIDDEN ICON – BOOK OF ICONS VOLUME ONE 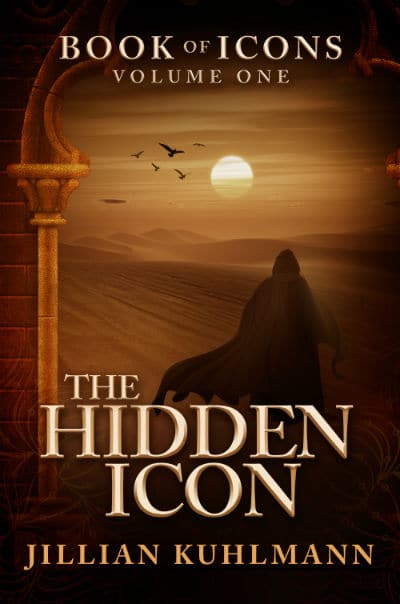 Sometimes the heart is the darkest place of all.

Gentle and perceptive, Eiren is a storyteller. She also has a gift: she can sense the emotions and thoughts of those around her. Her power stems from an incredible darkness that exists within, one that brands Eiren as an icon, the mortal incarnation of Theba, the goddess of destruction.

To save her family, Eiren surrenders to the enemy that has warred with her kingdom her entire life, unwittingly embracing that darkness and her own surprising capacity for fury and vengeance. As the icon of Theba, her captors expect her to restore their shattered kingdom at the expense of her own. As the woman Eiren, she is led by her heart to more unexpected places still: to murder, betrayal, and to the arms of another icon, the masked and enigmatic Gannet, whose secrets are not his to tell.

ABOUT THE DREAD GODDESS – BOOK OF ICONS VOLUME TWO 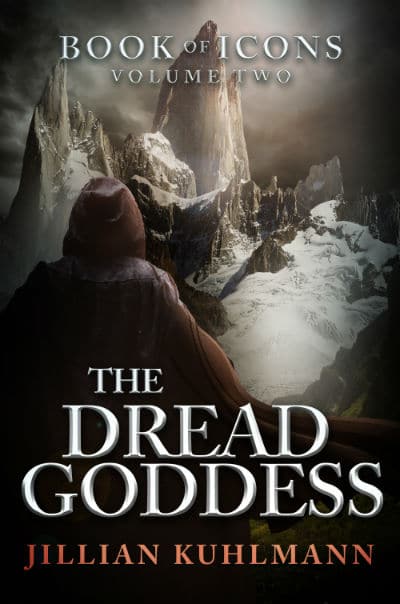 In the rival kingdoms of Ambar and Aleyn, gods walk among mortals in the form of human icons, carrying out their whims and waging untold chaos.

Having decimated the city of Jhosch, Aleynian icon Eiren flees to the wilderness of the Ambarian north. She finds solace in a distant sanctuary, trying to make peace with the knowledge that she embodies Theba, the goddess of destruction.

Soon, though, there is more devastation on the horizon: an imposter has declared herself the Dread Goddess in Eiren’s place and rallied the Ambarian army to destroy Aleyn. Traveling to cut them off and save her family’s kingdom, Eiren works to uncover the secrets of her past and keep Theba in check–all while consumed by memories of Gannet, the Ambarian icon she left behind.

Eiren’s journey takes her back to the haunted ruins of Re’Kether, an ancient city at the heart of a kingdom their warring peoples once shared. Now she must reconcile who she knows she is–a gentle-souled storyteller–with the monstrous Dread Goddess who dwells within.

Our romance-themed entertainment site is on a mission to help you find the best period dramas, romance movies, TV shows, and books. Other topics include Jane Austen, Classic Hollywood, TV Couples, Fairy Tales, Romantic Living, Romanticism, and more. We’re damsels not in distress fighting for the all-new optimistic Romantic Revolution. Join us and subscribe. For more information, see our About, Old-Fashioned Romance 101, Modern Romanticism 101, and Romantic Living 101.
Pin this article to read later! And make sure to follow us on Pinterest.
By The Silver Petticoat Review on October 13th, 2017