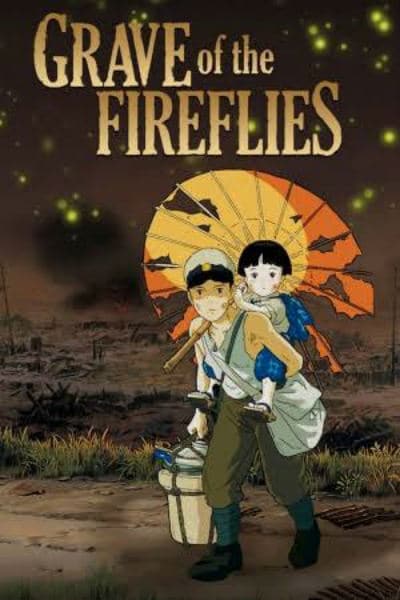 It’s rather difficult to write a review of Grave of the Fireflies without spoilers since the very first line in the movie is spoken by a boy, whose narrating spirit is watching his emaciated body draw its last rattling breaths. Seita is dead, 14 years old. And the tale that unfolds is a reminiscence of the events that led up to that death of that boy in that train station in that city in Japan in September 1945. One boy and one death among many, many others.

Grave of the Fireflies is an animated war drama, written and directed by Isao Takahata, co-founder of Studio Ghibli and longtime collaborator with Hayao Miyazaki. The renowned Studio Ghibli is behind the animation, which is as beautiful as ever, even in its bleakness.

The story – the story is based on a semi-autobiographical short story by Akiyuki Nosaka, and it hurts, it just hurts to watch it.

Siblings in a War Zone

Seita is a young teenager attempting to hold down the fort. His father is a soldier at sea, his mother is ill, his little sister Setsuko needs tending. And the bombs drop, again and again, the bombs drop – fire bombs, igniting all in their wake.

Seita and Setsuko end up alone, orphans in a war zone, trying to survive. But everyone is trying to survive, is looking out for theirs and theirs alone, so there is no largesse left. Their distant aunt has no love, no compassion, no understanding, to share. There is no food to spare. “This child is malnourished,” a weary doctor tells Seita at one point, after examining Setsuko, “She needs sustenance. Next.” Dismissed and desperate, Seita yells, “And where do I find that?!” There is nothing to spare and no one cares.

So, they fade, they fade away. Two beautiful children, loved by their parents, who love each other and once had a home and holidayed at the sea and ate caramels and dreamed of the future, cease to be – slowly and laboriously, they cease to be.

“Why do fireflies die so soon?” Setsuko asks at one point. Yes, why indeed.

Grave of the Fireflies is tender and terrible, brutal and beautiful, heartwarming and heartrending. It just hurts to watch it. It hurts to watch it, it hurts to write about it, it hurts to think about it. The film is exquisite, in the many senses of that word. It’s a film that you don’t want to watch, but you need to watch. It should be mandatory viewing. Truly, it’s the best film you’ll never want to see again.

RELATED: Vintage Film Review: When the Wind Blows (1986) – A Nuclear War Tale from a Different Perspective 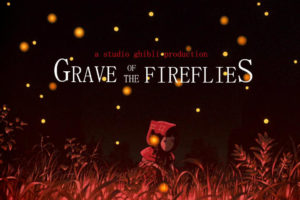 Content Note: Rated PG-13 – although in Denmark they recommend from 15 years of age and up – for mature thematic material, war violence, disturbing images, and some minor language.

Our romance-themed entertainment site is on a mission to help you find the best period dramas, romance movies, TV shows, and books. Other topics include Jane Austen, Classic Hollywood, TV Couples, Fairy Tales, Romantic Living, Romanticism, and more. We’re damsels not in distress fighting for the all-new optimistic Romantic Revolution. Join us and subscribe. For more information, see our About, Old-Fashioned Romance 101, Modern Romanticism 101, and Romantic Living 101.
Pin this article to read later! And make sure to follow us on Pinterest.
By Jessica Jørgensen on August 24th, 2017

2 thoughts on “Grave of the Fireflies (1988): The Best Film You’ll Never Want to See Again”