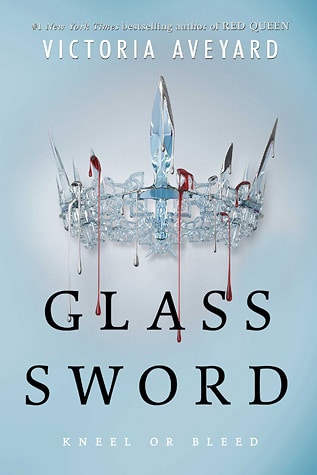 After the incredible ending of Red Queen, I had high expectations for its sequel Glass Sword by Victoria Aveyard.

The book starts at almost the exact moment that Red Queen left off. Hardly a minute has passed.

At the start of Glass Sword, the reader knows a couple of really important things. 1) Prince Maven, the younger silver prince, has usurped the throne. 2) Mare and Prince Cal are fugitives from justice, running with The Scarlet Guard. 3) There are other reds with silver abilities called New Bloods.

The beginning of the book is just as high paced and adrenaline pumping as the end of the first one and is a roller coaster from the first line. Then, around chapter 3, the roller coaster leveled out and it felt a lot more like I was wading through a swamp of information.

On that note, I have to be honest with you, I am having a hard time finding truly positive things to say about this book. It just wasn’t as good as the first book. It felt like filler, like Victoria Aveyard just needed to get the reader from the end of the first book to the start of the third book with certain information and a few new characters. It was like taking a cross country road trip and having to drive through the flyover states. Sure, there were a few exciting stops but mostly I felt like I was just muddling through it.

The writing was still lovely, Victoria Aveyard is a skilled writer who gives Mare Barrow a dynamic voice, and Mare is a dynamic character, possibly one of the most dynamic characters I have ever read. Still, I thought the book fell flat. I was no longer invested in the romance or the revolution. I was no longer really invested in the story. The villains became vague shadows and the heroes became their own kind of villains. And it had way too much sex to be a YA novel.

If you loved the first book, especially Mare and her internal struggle, this is the book for you. If you were on the fence about Mare to begin with I might skip it until the next book comes out so you can read right through to the end.

I envision Glass Sword as a movie. There were things about it I think would amaze on the silver screen. The jets, the fight scenes, and bone character who can manipulate gravity would be incredible to see but I don’t want to spend more than two hours of my life on it.

CONTENT NOTE: There are some sex scenes in Glass Sword.

Have you read Glass Sword? What are your thoughts on the sequel?

Our romance-themed entertainment site is on a mission to help you find the best period dramas, romance movies, TV shows, and books. Other topics include Jane Austen, Classic Hollywood, TV Couples, Fairy Tales, Romantic Living, Romanticism, and more. We’re damsels not in distress fighting for the all-new optimistic Romantic Revolution. Join us and subscribe. For more information, see our About, Old-Fashioned Romance 101, Modern Romanticism 101, and Romantic Living 101.
Pin this article to read later! And make sure to follow us on Pinterest.
By Katrina Daroff on May 9th, 2016