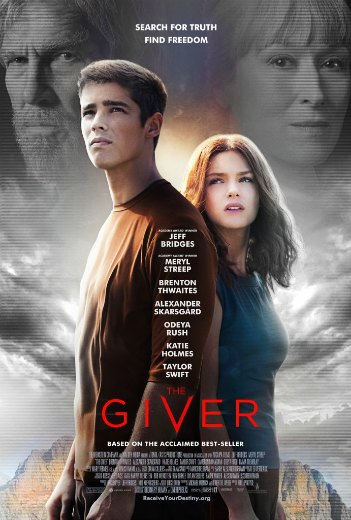 The “it” factor in Hollywood elite nowadays seems to be adapting YA literature into cinematic form. The Giver is just one in a string that appeared at the Cineplex in 2014 alone. Based on the 20 year old novel of the same name, the star-studded cast is one of the greatest appeals of this story.

The story focuses on one hero along with his two best friends. We open on graduation day for Jonas (played by Brenton Thwaites) and his pals. Life as he knew it is about to change as he accepts the destiny he has been carefully monitored for. His family lives in a perfect society where everything is the same so as not to cause dissension or jealousy among the people. Void of feelings – of love, of hope, of lying – the children are taught to be precise in their language and are even given daily injections to avoid these feelings. Jonas’ friend Fiona (Odeya Rush) earns the role of caregiver at their ceremony, only Jonas’ number is skipped over. As it would happen, there is reason for that: Jonas has a purpose much greater than that of his friends. He has been chosen as the next keeper of memories and his training with the Giver of Memories (Jeff Bridges) begins the next day. 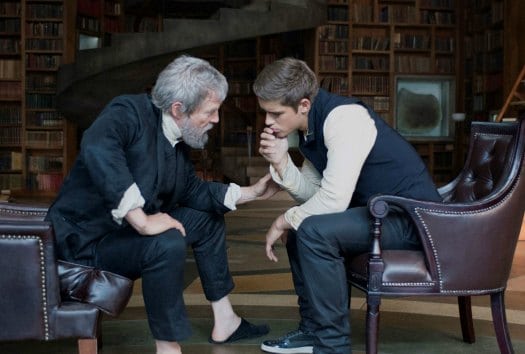 Prior to watching this, I read nearly the entire book in one sitting. Unfortunately, I didn’t really get tugged into the story (either because I wasn’t in much of a reading mood or as a result of the story itself). I’m not sure which it was. In part because of this, I’m not sure this is going to go on my list of favorite stories ever… however, like with so many dystopian stories, this one again manages to beat out my ranking for The Hunger Games (speaking specifically to the book). Those who’ve read Lois Lowry’s ‘Giver’ quartet in full will be able to correct me if this is in error, but I gather that this book was really the beginning of the dystopian genre. If that’s true, I am impressed with this film (by way of its book). There is a quality to the storytelling that is compelling and uninhibited – the latter being used in a positive connotation. At the very least, this is certainly one of the earlier dystopian genres and knowing that sheds an unencumbered opinion on the story and definitely allows for it to be separated out from its peers. As a work of film, I really did find this brilliant. Here’s why. 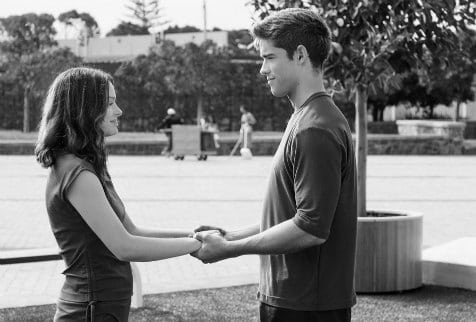 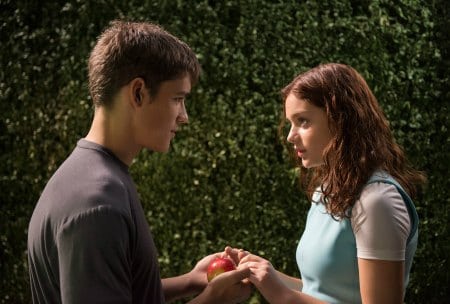 The production was breathtaking with its stark contrasts of color and black-and-white filming. How it wove in an out of the opposing filming methods was brilliant, really. There are moments beautifully translated from book-to-screen that fall into this technique, which makes the film seem more “alive” than its counterpart tone. This quality is definitely more vibrant and important visually since the description of Jonas’ world doesn’t come across the same in print. Same with the pacing; the book was a slow-moving impact that hoped to have a quieter entrance into our minds, whereas the film didn’t shy away from its source though it definitely kept a better stride. Somehow in HD magnificence, The Giver was a little bigger, more breathtaking, and equal parts exciting and impactful. It had that capacity to be “more” and it took every liberty it could to fulfill that.

The cast also sells the production. Brenton, Jeff, Meryl Streep, Katie Holmes and even a brief (more like cameo) appearance by Taylor Swift is all this adaptation needed to be brilliant. That alone keeps the film stuck in our memory far after fading to black. Brenton carries the film well and I appreciated that his character seemed older in this than the impression the book gave. It helped the film overall, especially since that seems to be what is more marketable to the audience studios were wishing to nab. The biggest issue I took with the story was its message. It hits eerily close to some of the same things we’re facing today. What I admired most about the script, was the hero we meet. Jonas gives us someone to champion and be enthralled with. His quest is something he believes passionate in and I admired him for not letting the powers that be silence his world any longer. Because of this, the story “feels” right. I liked the progression of Jonas’ change and how he begins to deeply be affected by his training, and all the secrets it showed him. Bottom line, I’d give this a gold star for its interpretation of the book. I suspect those of you who count Lois’ book as a childhood favorite will have many quibbles with the adapting. But for a girl who hadn’t even finished the book when she started watching it, I’d say filmmakers did the iconic story proud.

Our romance-themed entertainment site is on a mission to help you find the best period dramas, romance movies, TV shows, and books. Other topics include Jane Austen, Classic Hollywood, TV Couples, Fairy Tales, Romantic Living, Romanticism, and more. We’re damsels not in distress fighting for the all-new optimistic Romantic Revolution. Join us and subscribe. For more information, see our About, Old-Fashioned Romance 101, Modern Romanticism 101, and Romantic Living 101.
Pin this article to read later! And make sure to follow us on Pinterest.
By Rissi JC on December 20th, 2014

5 thoughts on “Film Review: The Giver”