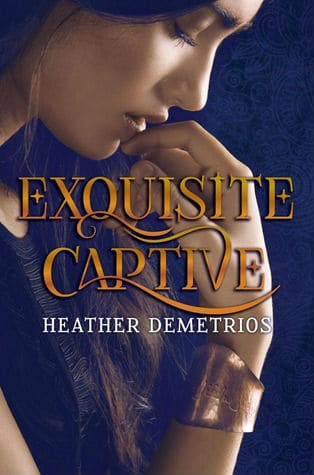 Imagine a world in which jinnis and their magic are real, a world where jinnis are divided into castes based on the color of their chian, the smoke they emit, and the element they draw their power from. The most powerful jinnis are the all-female ruling caste, the Ghan Asouri. That is, until two separate revolutions clash and destroy all but one Ghan Asouri girl who is sent to earth as a wish maker’s slave. Well, that’s exactly the world you get with Heather Demetrios’ magical and captivating book Exquisite Captive.

RELATED YA Review: Ivory and Bone – Can Love Survive in a Prehistoric World?

I was unsure about Exquisite Captive for at least the first 200 pages, which is a long time to be having second thoughts. I liked the main character and the world was richly imagined but the plot was giving me icy shivers that I could not shake even when I put the book down and walked away for a few hours. Mostly I was concerned about the love triangle being developed. It seemed like the writer was glorifying an abusive relationship, which is something I will not tolerate in a book written for young girls. But the book was so much more than what it appeared to be at a cursory glance.

The main character is an incredibly strong and willful young woman who knows her worth so I was personally shocked by the decisions she was making. I continued reading with the hope that the author would give Nalia the chance to pull herself out of the situation she was in. I was not disappointed. Rather than glorifying a bad relationship, Heather Demetrios explored the question of what people will do and put up with when their hunger for affection wakes up. She also looks into the way attraction can affect even the strongest woman. When you know the person is wrong for you and you know they cannot be trusted but you are drawn to them anyway. The book takes a really hard look at the way those relationships happen.

Here’s why you should put Exquisite Captive on your summer reading list:

This book has something for everyone. It is smart and serious while also being fun – filled with romance, action, and magic. And let’s be honest, who doesn’t want to live in a world with jinnis and magic?

I would stand in line all night to see this book as a film! It would be amazing on the silver screen.

Content Note: This book does deal with a lot of subjects that are not appropriate for younger readers including seduction, human trafficking, and drug use. There are no explicit scenes but it is there beneath the surface.

Our romance-themed entertainment site is on a mission to help you find the best period dramas, romance movies, TV shows, and books. Other topics include Jane Austen, Classic Hollywood, TV Couples, Fairy Tales, Romantic Living, Romanticism, and more. We’re damsels not in distress fighting for the all-new optimistic Romantic Revolution. Join us and subscribe. For more information, see our About, Old-Fashioned Romance 101, Modern Romanticism 101, and Romantic Living 101.
Pin this article to read later! And make sure to follow us on Pinterest.
By Katrina Daroff on July 8th, 2016

2 thoughts on “Exquisite Captive Book Review – Genie in a Bottle”