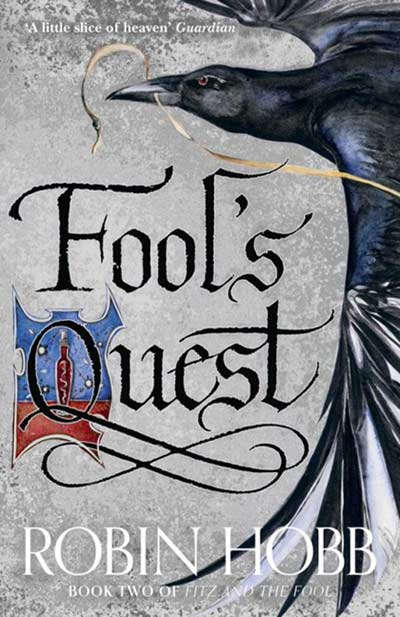 Contains spoilers for earlier books in the series.

That was my thought at the end of Fool’s Assassin when the mysterious White kidnappers took little Bee. Not my first thought. My first thought was: That can’t be the end! Followed closely by, Fitz, how can you be so stupid? (A common thought when reading any story about Fitz and the Fool). I expected Fool’s Quest to begin with an enraged Fitz riding off to Clerres, sword drawn, with the Fool in tow.

But Robin Hobb seldom gives you what you expect.

The Fitz we see in this new trilogy is not the impulsive boy we remember from earlier stories, but rather a mature man who has learned (at least partially) the value of taking stock and being prepared before rushing into a situation. Neither will the other people in his life (Nettle, Dutiful, Chade) let him play the lone wolf any longer. So, instead of a headlong chase, we are once again given a gradually building story. One in which Fitz must face the consequences of the events of Fool’s Assassin. What has become of Bee? Can she be recovered? Will the Fool live? And will Fitz stop being so dense and recognise Bee’s true nature?

Fitz’s sudden flight with the Fool brings him back into the life of Buckkeep Castle, where old friends and new demand his attention. He must also face the consequences of what Bee’s abduction has done to the folk at Withywoods and take responsibility for them too. The old assassin, Chade, turns out to have yet more secrets that will come to light. And Fitz’s personal tragedy will have ramifications for the wider politics of the Six Duchies. 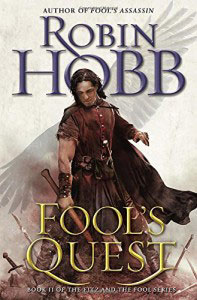 But for Fitz – and the reader – there are two characters whose fate looms largest. Bee. And the Fool. For one sweet moment, the two knew enlightenment in each other’s arms. Then Fitz’s fear for his daughter caused him to attack his dearest friend. And his remorseful action took him away from Bee when she needed him most.  The tug of emotions between Fitz’s love for Bee and his love for the Fool is at the heart of this book. And, believe me, there is a lot of emotion in this book. As ever, I defy you to read it and not cry at some point.

I have to say, I have become very fond of Bee. I like reading her thoughts in the chapters from her point of view, and almost wish there were more of them. Despite her apparent frailty, she is a strong person, with all that’s best of her (three? four?) parents. Through her eyes, we come to learn more about the mysterious Servants and their intentions for her. And more about Clerres, birthplace of the Fool.

We also learn more about the Fool himself (herself?).  Although never enough to fully remove the mystique from the person variously known as the Fool, Amber, Lord Golden and Beloved. The Fool is particularly beloved by me, and each extra moment he gets to spend with his beloved Fitz is a blessing in my book, whatever else must be suffered. In this book, the Fool also finds new friends in the midst of suffering. And changes once more in a way I would never have predicted.

As with Fool’s Assassin, Fool’s Quest end with an emotional cliffhanger, leaving me once again with the thought: That can’t be the end!  Again, we will have to wait a year for the conclusion. I have many private theories as to what might happen next, but I have no doubt that Robin Hobb will once more surpass them all. As to whether this will truly be the end for Fitz and the Fool, we can only wait and see.

Content Note: There is violence in this book with some disturbing descriptions/references to molestation and rape. Read with caution.

Our romance-themed entertainment site is on a mission to help you find the best period dramas, romance movies, TV shows, and books. Other topics include Jane Austen, Classic Hollywood, TV Couples, Fairy Tales, Romantic Living, Romanticism, and more. We’re damsels not in distress fighting for the all-new optimistic Romantic Revolution. Join us and subscribe. For more information, see our About, Old-Fashioned Romance 101, Modern Romanticism 101, and Romantic Living 101.
Pin this article to read later! And make sure to follow us on Pinterest.
By Elizabeth Hopkinson on August 29th, 2015