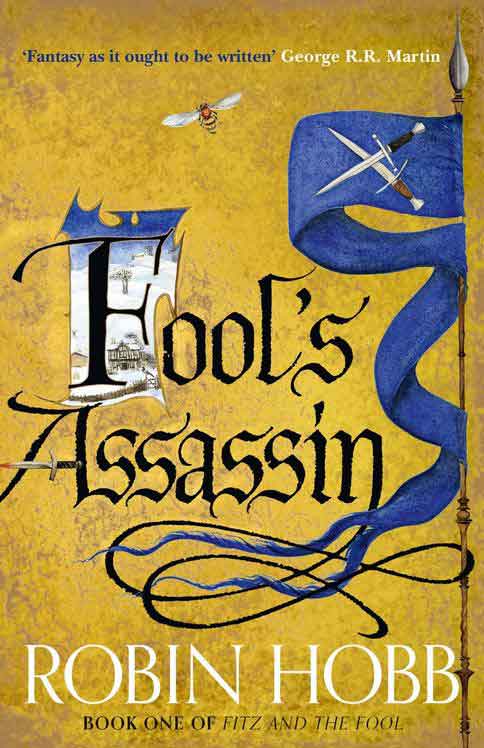 “Nearly twenty years ago, Robin Hobb burst upon the fantasy scene with the first of her acclaimed Farseer novels, Assassin’s Apprentice, which introduced the characters of FitzChivalry Farseer and his uncanny friend the Fool. A watershed moment in modern fantasy, this novel—and those that followed—broke exciting new ground in a beloved genre. Together with George R. R. Martin, Robin Hobb helped pave the way for such talented new voices as Scott Lynch, Brandon Sanderson, and Naomi Novik.

Over the years, Hobb’s imagination has soared throughout the mythic lands of the Six Duchies in such bestselling series as the Liveship Traders Trilogy and the Rain Wilds Chronicles. But no matter how far she roamed, her heart always remained with Fitz. And now, at last, she has come home, with an astonishing new novel that opens a dark and gripping chapter in the Farseer saga.

FitzChivalry—royal bastard and former king’s assassin—has left his life of intrigue behind. As far as the rest of the world knows, FitzChivalry Farseer is dead and buried. Masquerading as Tom Badgerlock, Fitz is now married to his childhood sweetheart, Molly, and leading the quiet life of a country squire.

Though Fitz is haunted by the disappearance of the Fool, who did so much to shape Fitz into the man he has become, such private hurts are put aside in the business of daily life, at least until the appearance of menacing, pale-skinned strangers casts a sinister shadow over Fitz’s past . . . and his future.

Now, to protect his new life, the former assassin must once again take up his old one. . . .”

I cried at the end of Fool’s Fate. I don’t just mean I shed a few tears. I actually sobbed my guts up, both while I was reading it and after I had finished. I was depressed for weeks. I couldn’t pick up a novel for ages.

Don’t get me wrong. I loved the book. In fact, the Tawny Man trilogy (and the whole story of Fitz and the Fool from the beginning) means a huge amount to me on a personal level. It’s not an exaggeration to say it changed my life. I just couldn’t cope with the way it ended. I couldn’t believe that was the end. And I couldn’t cope with how Robin Hobb just wouldn’t say if she would ever write more.

Which was why no one was more excited – and more terrified – than me when Fool’s Assassin came out this year to begin a whole new cycle: the Fitz and the Fool trilogy. I simply had to know what would happen next. Would Fitz and the Fool meet again? Could old hurts be healed? Or was Robin Hobb going to put her beloved (pardon the pun!) characters through even worse this time?

I don’t want to give away too much for those who don’t know the story. Let me just say, this was such a beautiful book, I wanted to eat it. I loved the new setting of Withywoods (especially those winter scenes). I loved the new character of Bee. I loved the fact that there are clues to the story in the cover art. I even liked Molly, for the first time ever.

However, let me say, don’t let Robin Hobb lull you into a false sense of security. For a long time, much of the story is relatively gentle, and you might think she’s finally gone soft. She hits you with the suffering just when you least expect it, and leaves you screaming at the end of the book, “But what happens next?!?” (Along with the familiar, “Fitz, how can you be so dense?”) Along with all the other fans around the world, I will have to wait for the next book.

If you haven’t yet let Fitz and the Fool into your life, iBooks are currently giving away the very first book – Assassin’s Apprentice – for free. So you can enjoy the whole, nail-biting saga from the beginning.

This is the latest installment in an epic story, so it would either have to be a huge, Game of Thrones style TV series, or part of a series of big and beautiful films, similar to Lord of the Rings/ Hobbit.

Buy at: Amazon and Amazon UK

Our romance-themed entertainment site is on a mission to help you find the best period dramas, romance movies, TV shows, and books. Other topics include Jane Austen, Classic Hollywood, TV Couples, Fairy Tales, Romantic Living, Romanticism, and more. We’re damsels not in distress fighting for the all-new optimistic Romantic Revolution. Join us and subscribe. For more information, see our About, Old-Fashioned Romance 101, Modern Romanticism 101, and Romantic Living 101.
Pin this article to read later! And make sure to follow us on Pinterest.
By Elizabeth Hopkinson on October 30th, 2014