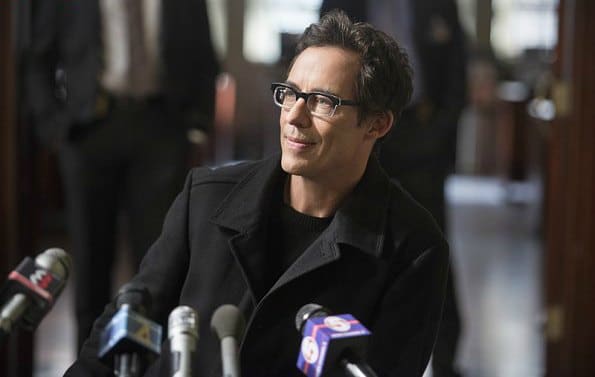 Foiling another gang of villains from their plans is all in a day’s work for the Flash. That’s where we open. Watching Barry on the trail of a woman escaping capture on a motorcycle and with help from Wells and the S.T.A.R Labs team, he manages to foil a three man team. But that’s not the interesting revealing story episode eleven has to tell…

Barry is (unfortunately) still fully under Wells’ influence. His “training” for when he next comes into contact with the Reverse Flash seems to still be a go as well. Following his latest mission success, after his return to S.T.A.R Labs, there are selfies and gratitude to go around. He seems to think that without Wells, he wouldn’t be able to do this job as evidenced by him thanking (the lying, villain) Wells for helping him through their latest case. To Barry, Wells is some kind of scientific hero, not to mention a decent chap. As a viewer, I am anything but comfortable with Barry placing his trust in this dude.

Later that night, Wells returns home, a place where he can cut the lying act . He walks about his spacious mansion, has a sip of wine then gets a mysterious phone call. A warning is issued by the voice on the other end of the line and shortly thereafter, an invisible force shatters the glass in Wells’ ceiling. This forces Wells to reveal himself (only wish he had an audience) – he does hold the same superpower Barry does. Next morning, Joe and Barry show up at Wells’ house in their official capacity. Shortly thereafter. Cisco and Caitlin show up. Eddie, Joe and Barry work the case from the policing capacity. Barry’s forensic work discovers there is no point of impact and in a private moment, Wells tells Barry he knows who did this: it was Harley Rathaway. The prodigal (S.T.A.R Labs colleague) has returned… 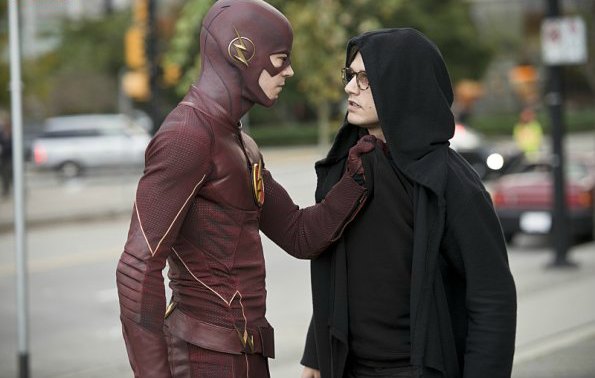 Wells plays checkers with a gentleman named Hartley. Then, Cisco enters and is introduced to Hartley (by Wells) as a brilliant engineer. Cisco is being pitched by Wells to join Harley’s research team, which doesn’t go well with Hartley. Hartley is brilliant and he seems to know it – he’s apparently one of Wells’ partners or at the very least a trusted member of his team.

With knowledge of the person who is targeting him foremost on his mind, Wells is forced to share what he knows about Harley with Joe and his team – he is one of the best scientific minds of his time, he tells them. Caitlin and Cisco share their memories of Hartley – neither one of them liked him overmuch. And as it would happen, he helped build the particle accelerator. Wells tells Barry, in response to his question wondering what happened that caused Hartley to leave a year ago, after a disagreement. Wishing to never see Hartley again, Cisco and Caitlin recall Hartley’s jerk personality, and Cisco remembers meeting Caitlin for the first time. 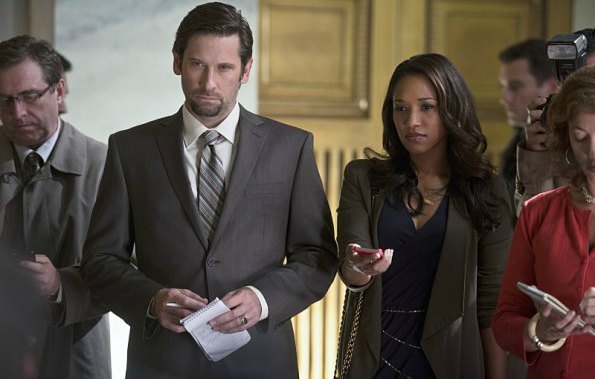 Meanwhile, Barry returns home to find Iris picking up a few things she forgot. Some lighthearted chit-chat ensues between the three – Joe, Barry and Iris, and then she learns that she’s gotten a job with the newspaper.

Iris’ first day of work is less than she imagined in spite of her cheery, optimistic attitude. Her boss wants her to write about the Flash (which she knows is the real reason she was hired). Since Iris hasn’t reached out to him following their fallout, she’s not too keen to accept these assignments. She’s assigned to work under a “legendary” reporter and the reception she receives from him is less than welcoming. He assumes her to be a talentless writer who has no business being taken seriously as any kind of journalist.

Following the latest Flash sighting, Iris is asked to look into it, but her first day requires venting and of course, she goes to best friend, Barry for that. Over coffee, the two have a nice moment of “connecting” as friends.

In Barry’s lab, Barry along with Joe experiment with glass, leading Barry to discover Hartley is using sonic power. Joe confides in Barry that he believes Wells is hiding something but a 911 call cuts their conversation short. Eddie tells them there have been multiple 911 calls; Rathaway Industries is under attack. Barry wastes no time confronting Rathaway with his speed, and manages to subdue Hartley without much trouble. Things end with Barry learning that Hartley knows Wells’ secret – but what is it? Barry brings Hartley to S.T.A.R Labs prison cells. Caitlin and Cisco get a face-to-face with Hartley, who acts surprised that Cisco is still with Wells. Cisco taunts him that Hartley didn’t last ten minutes against the Flash! Hartley then snaps back that he hoped to become the Pied Piper, making Cisco “mad,” because after all, he’s the only one who can give nicknames. Hartley and Wells  of course exchange words – Wells finds out how it is Hartley learned the Flash was working with them. And Hartley has a message for the Flash: one day Wells will turn on him. Only he hopes that he’s dead when it happens – Hartley has to live every day in pain as a result of the accelerator and the damage it caused to his hearing. 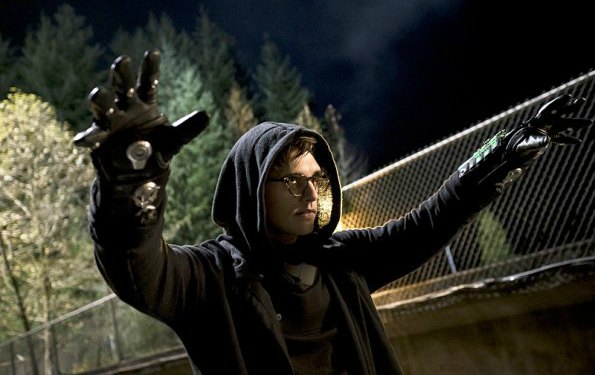 Afraid Hartley will tell the secret, Wells confesses to his team what he’s holding over him. Hartley warned Harrison against the accelerator. He (supposedly) was told by him that there was as chance the accelerator might explode. Caitlin tells Wells that next time he wants to put their lives and everyone they love at risk, a heads up would be nice.

After examining Hartley’s gear, Cisco discovers that the gear was on the lowest setting, suggesting he wanted to be caught in spite of having the ability to take down his father’s entire building. Using his ear piece for an explosive device, Hartley makes a break for it. His first act is getting into the computer lab where he knocks Caitlin out and grabs his gear. Helpless and on the floor after he tries to stop Hartley, Wells calls Barry to stop him, but Hartley gets away.

Wells insists on taking the blame for Hartley’s havoc, believing he won’t stop until he feels vindicated that Wells pays for his crimes. He sets out to earn back his team’s trust. We flash back to Wells finding Hartley checking the accelerator and learn the real reason Hartley is no longer one of Wells’ prodigies: he fires him. In the present, Wells calls a press conference, admitting that he was warned by a former colleague that the accelerator may fail. The gist of the press conference is that Wells hopes to rebuild the trust of the city.

Their only play now is to wait for Hartley to make the next move. They don’t wait long. Hartley calls out Wells and the Flash. A time and place is set and Barry is sent to be Wells’ “Knight” in Hartley’s game of revenge. He’s looking for one last game of chess. Barry prepares to meet Hartley while Cisco attempts to pinpoint his location by tracking the tremors he’s creating. Wells wants Barry to disarm Hartley immediately. When Barry is fighting Hartley, Cisco discovers that Hartley stole Barry’s molecular scans – he can find Barry’s frequency. While Hartley works at destroying Barry with the frequency, Wells sends his own “checkmate” to destroy Hartley’s hold over Barry. Hartley is locked up with a smug certainty that Cisco will let him out – after all, he knows where Ronnie is. At the end of the day, Wells admits it’s difficult to tell an entire city and his friends when he’s wrong. Barry replies that Wells has restored the trust his team once had in him. 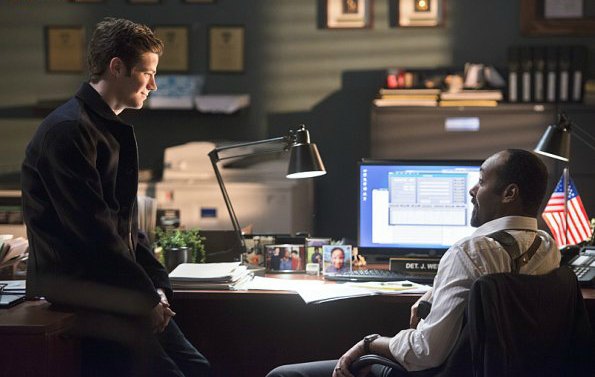 A visit to Joe is in order where Barry thanks him for raising him and says no one could replace Joe. Exit Barry, enter Eddie. Eddie was asked by Joe to search Wells’ house, but as we figured, he tells Joe said search revealed nothing. Eddie wonders if Joe is sure he wants to investigate Wells. Joe does.

Wells meanwhile is in his super-secret room asking his computer, Gideon why he’s losing speed. The results are inconclusive, the voice says, but Wells isn’t worried: the real endgame is almost here.

Your turn: speculation, thoughts, comments are welcome about last night’s episode! I thought this one was full of great moments and fabulous insights into what makes Wells tick. Things seem to be lining up to suggest Wells is indeed Barry’s nemesis and things are playing out swiftly on that front. Join us again next week when we recap “Crazy for You” – the episode looks really fun, and I cannot help but be giddy that Barry might have met someone!

Our romance-themed entertainment site is on a mission to help you find the best period dramas, romance movies, TV shows, and books. Other topics include Jane Austen, Classic Hollywood, TV Couples, Fairy Tales, Romantic Living, Romanticism, and more. We’re damsels not in distress fighting for the all-new optimistic Romantic Revolution. Join us and subscribe. For more information, see our About, Old-Fashioned Romance 101, Modern Romanticism 101, and Romantic Living 101.
Pin this article to read later! And make sure to follow us on Pinterest.
By Rissi JC on January 28th, 2015