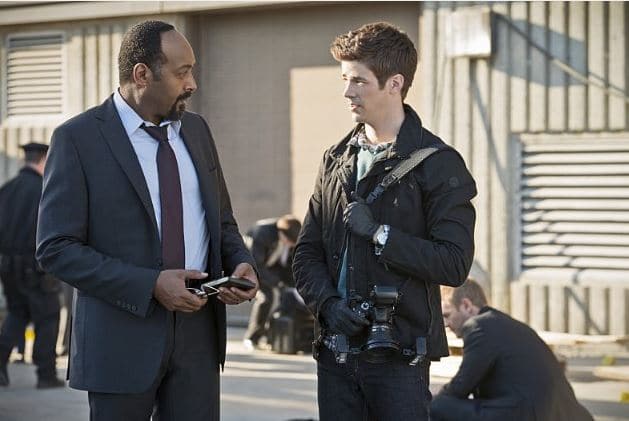 Same as with last week, I felt like this week’s episode was a bit… “blah.” Oh, it’s still entertaining as all get out… and the characters – particularly its titular character who, may I just say reminds me of my love affair with Captain America thanks to his moral image; however, the writers seem to be “holding back.” Is this perhaps because of the upcoming epic 2-night event (The Flash and Arrow crossover), or maybe it’s merely a case of a first season finding its stride (which nearly all shows go through)? Either way my opinion hasn’t changed about the show; it’s merely interesting to pick out the favorite episodes and to realize just how outwardly pointless some of  the characters are.

On the same night that Barry earned his powers, a group of three friends are at a lookout waiting for the accelerate event when bad things happen. One of its group winds up being zapped by lighting and falling a substantial distance while his two friends rush to help him, their lives lost…

Next, we watch as Wells opens the doors to his uber-secret room where he calls up his log book to add new entries about Barry’s comfort levels with his speed – using it to do menial, daily kind of tasks. He believes that Barry is getting a bit cocky with his speed leading to further research for his evil purposes, which is further solidified in this episode. I’m never sure what this dude’s endgame is though I do think one thing this episode does is convince the viewer that whatever Wells is up to, it’s nothing good. His schemes (more of which are further down below) keep getting worse and worse. (One of these situations will have to alert Barry to his evil plans, especially since there are opportunities for him to learn about Wells – earlier this season Plastique tried to warn him only she didn’t make it.)

At Barry’s day job, there is a new crime scene for him to shift through the forensics and this time it involves a body that has been melted by electricity. – As a side note, Barry denotes that something is off with Joe, though he won’t say what is troubling him and wonders what this could be. Is it about Iris and Eddie (who is still not really a character that’s come into his own, nor really has Iris)? Back on target. Thanks to software upgrades from Felicity, Cisco is able to I.D. their victim as someone who used to work at the power plant and what’s odder is there is now someone using his I.D. at the substation. Once he gets there, Barry is beaten by “Zappy” and – gasp – his powers are taken as this man feeds off of him to derive his powers from. 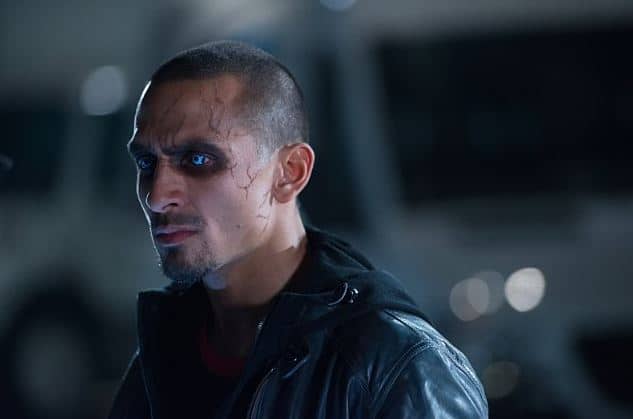 Flash-forward and after Barry’s encounter with Zappy, Cisco finds an I.D. on him (Farooq) as a man who was involved in a freak accident 10 months ago; the same night as Barry’s own accident. This puts the S.T.A.R Labs group in a bad position with Barry being unable to defend the city, his friends at the lab and much to his distress, the chance to protect Iris and Joe… 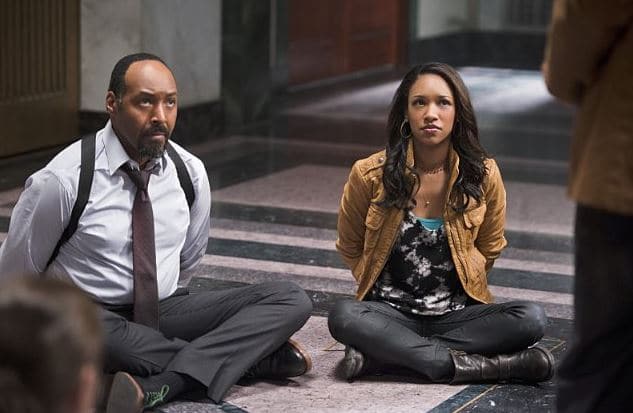 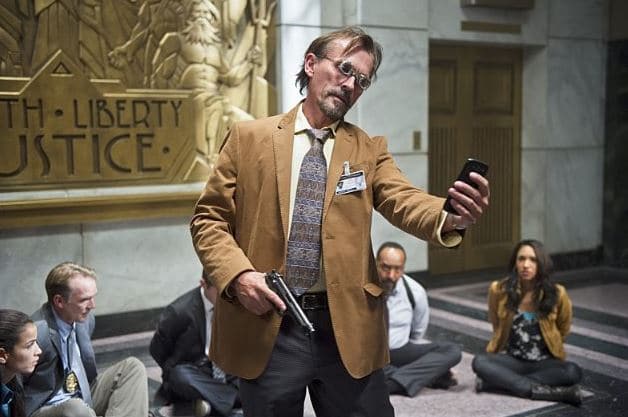 Elsewhere, the Central City police station has been taken hostage by the William Tockman or as he’s known, the Clock King. Joe, along with a handful of his fellow officers, are in the precinct when the criminal takes it over and to make matters worse, so is Iris – this makes Barry all the more agitated as he cannot come to her aid. Even if he could…he couldn’t because simultaneously the lab is being high jacked by Farooq who is demanding an audience with Wells. The greatest predicament is that without Barry, they cannot defend themselves from a man who thrives on electrocuting people and becoming more powerful in the process. So (unbeknownst to Barry or anyone), Wells releases Barry’s old nemesis Tony. Pumping him up to fight off Farooq only unable to withstand his powers, Tony dies leaving Barry primed for a fight with Wells (when he finds out Wells released Tony as a means of diversion) and accusations that Wells doesn’t care for people. His biggest fight of the night is yet to come. 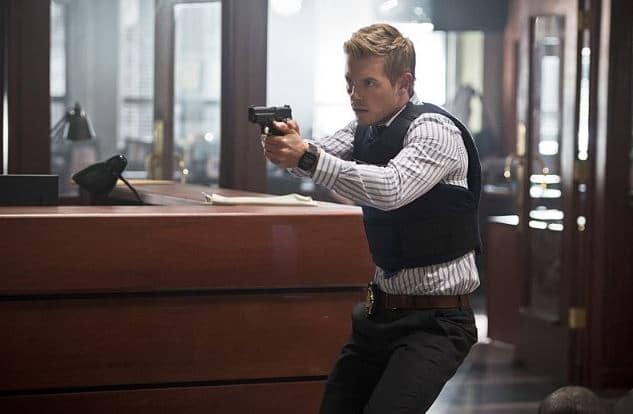 SWAT is still attempting to resolve the hostage situation made more difficult by a power outage (thanks to Farooq) and sets about meeting the demands of Tockman, a man angry that he was denied a chance by the DA to see his dying sister. Things get worse when Eddie appears to save the day having gone unseen since Tockman took the building and in an effort to be heroic, he is shot of his troubles. (I just have to say again that I’m still not overly sure why this dude is receiving a bigger part than he needed by pairing him with Iris; I’m not sure that I adore either one of these characters yet merely because Eddie’s story is of little value other than being a detriment to Barry in the romance department. Iris hasn’t been fleshed out well enough either. I so want to love her because I think Joe is a cool guy.) 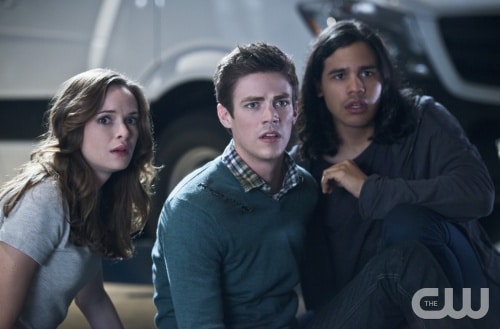 Moving back to S.T.A.R Labs, a big showdown is about to happen. Barry and Caitlin work on getting back his powers by putting him on a treadmill, but it doesn’t work which means the gang feels their only option is to make a run for it. Before they can successfully make an escape, Farooq appears to torment them and right before he plans to take out his revenge and anger over not getting a face-to-face with Wells, Barry retains his powers (which Cisco suggested were really there after the regeneration exercise and it was a mind game for Barry) and as Wells distracts their angry visitor, Barry is able to take down Farooq even as he siphons Barry’s powers – this time the strength was too much for Barry. Caitlin’s tells him, his regenerated cells have made The Flash even stronger and Farooq couldn’t retain that kind of power – he now has more energy than ever.

Finally at the station, Iris is being taken as Tockman’s “on the go” hostage as he heads towards his helicopter all while Iris is still believing in the Flash to rescue them. Fortunately, she gets to say goodbye to a bleeding out Eddie and puts his whispered words to good use and takes his ankle weapon, which she promptly uses to subdue Tockman. A happy end to the day for all – and when Barry gets there, he happily finds father and daughter on the stairs safe and well.

The episode wraps with Wells entering more information – now he doesn’t think Barry’s attachment to people will hinder him. It’s clear he has plans for The Flash, none of which are good as he can find future stories on his secret system and let me tell you, the newspaper headlines are not so good. Also indicative of a sinister future for the unsuspecting Barry is Wells entering the cage where Farooq’s body is stored and taking a sample of his DNA because he wants to discover how Farooq stole The Flash’s powers. Oh dear. That doesn’t sound good at all.

At the hospital, Joe and Iris are at Eddie’s side, who happens to be doped up on painkillers and totally out of it. Joe tests Barry as Iris exits to get coffee and learns that Barry’s powers are back. In the hospital hallway, The Flash appears to apologize to Iris saying that his absence couldn’t be helped to which Iris replies a girl needs to be her own hero now and again. Then, this happens…

Iris: “My best friend is always saying that and he’s always late.”

Barry: “You’re worth being on time for.” 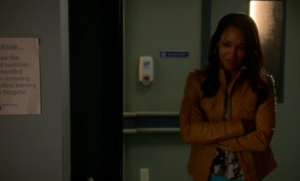 Back in the hospital room, Iris appears after The Flash has again disappeared with a kind of wishful look on her face. Though it’s not her reaction we’re most delighted by. 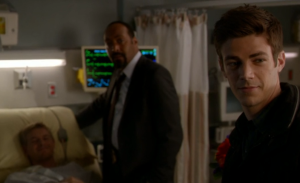 Barry’s smile says it all.

Over to you readers: What did you think of last night’s episode? Did you think it was lacking or did you feel like there was an important leap to any one story? One thing I found interesting was the two different stories taking place. I don’t remember that being something that has happened here before. I’m not sure how this episode ranks for you though one thing I am pumped about is next week’s presumably dynamic episode of ‘The Flash vs. Arrow’! Who else is eager to see what comes of this epic night? Stay tuned, we’ll have you covered with recaps of both episodes and are looking forward to chatting with you all about this crossover for Central City and Starling.

Our romance-themed entertainment site is on a mission to help you find the best period dramas, romance movies, TV shows, and books. Other topics include Jane Austen, Classic Hollywood, TV Couples, Fairy Tales, Romantic Living, Romanticism, and more. We’re damsels not in distress fighting for the all-new optimistic Romantic Revolution. Join us and subscribe. For more information, see our About, Old-Fashioned Romance 101, Modern Romanticism 101, and Romantic Living 101.
Pin this article to read later! And make sure to follow us on Pinterest.
By Rissi JC on November 27th, 2014