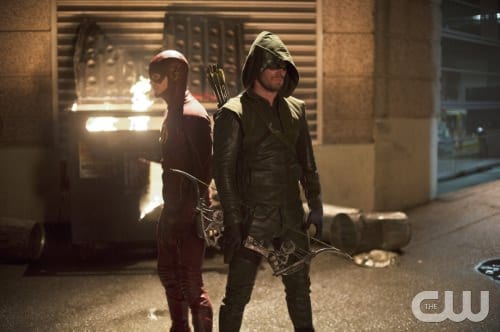 Last night was THE night CW fans have been waiting for. The epic two-night crossover event kicked off with The Flash and a robbery. Fortunately for this girl (not sure what you all thought), this was the kind of awesomeness I’ve been awaiting! After a couple weeks of so-so storytelling, this hour left us with many good things. Cannot believe how cool (in a superhero universe kind of way) this outing was and more than that, it had purpose in the stories it imparted and left us with – plus one huge secret is hinted at.

Barry’s unrequited love is still being unanswered and as he dashes about Starling City we see him (as the Flash) watching Iris from afar. This ends when a robbery call comes in. Once at the bank, mass chaos greets Barry – every one of the patrons is attempting to kill or attack each other and when the dust settles (the effect on the people wears off) a half a million bucks is missing. 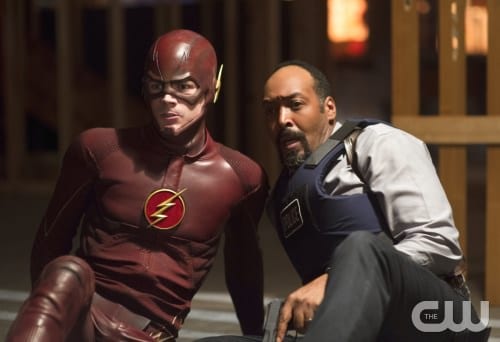 A new meta-human seems to be on STAR Labs radar, one that need only flash a look at anyone with his glowing eyes to infect them with the desire to hurt anyone in their path. Their brains show signs of being overwhelmed and unlike a normal person that rejects the bad, their mind is temporarily only capable of doing the unthinkable. Barry’s interpretation of the bank event was that everyone in the “bank went total savage then they were fine again.” Basically this was indeed true. The scene wasn’t just chaos – it reminds of a scene straight out of a zombie movie – though this new villain isn’t Barry’s only problem. We’ll find out more about that later on down the page.

In between other meetings (including a secret meeting between the Flash and Iris), Barry gets a call that Cisco has located the tracers on the bills and sends Barry to a location. There the police stand at the ready to take down the red-eyed villain, only he manages to use one of their own SWAT members against them. And as Barry saves Joe, Arrow arrives on the scene just in time to disable the SWAT cop who shot at his own men. The interaction between these two is really quite hysterical – Oliver’s only words to Barry before he disappears are, “nice mask” and then it’s time for these two to meet up away from prying eyes to discover why Oliver is in Central City. 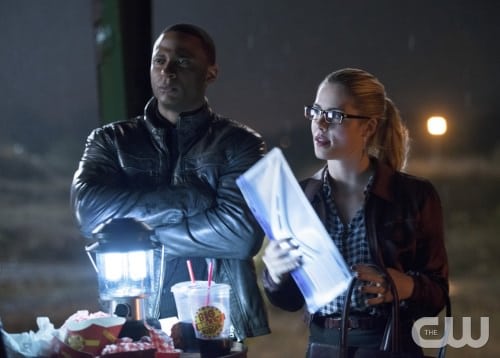 After giving Oliver a ½ hour head start both Barry and Oliver join Diggle (who is in awe at the speed Barry can achieve) and Felicity at their temporary meeting place while in Central City. Turns out the two heroes are working separate cases only Felicity needs use of STAR Labs to solve their contradictory cases. And hearing about Barry’s case over the scanner, Oliver merely showed up to lend a hand (or more accurately, a well-aimed arrow). Excited to have his friends in his city, Barry suggests the two teams join up; Oliver is reserved (be careful, Oliver… your love for Felicity and subsequent jealously is showing!), Felicity thinks it a grand idea. Who do you suppose wins this argument? Felicity of course. Oliver gets the robber’s I.D. and in a comic bit of dialogue, Barry questions Oliver as to whether or not the guy is still alive. The two begin their partnership. Oliver believes Barry needs training, he doesn’t think he’s near as prepared as he is. Oliver tries to help Barry though he doesn’t go about it in all the right ways; Oliver proves his point by shooting Barry in the back.

(On Team Arrow’s investigation, they are chasing a DNA match and a boomerang something that Felicity can I.D. with the assistance of STAR Labs and before she can blink, Barry has her off to the labs to work her magic.)

Only trouble with the arrival of Arrow and Company to Central City is Joe and Wells. Neither man wants Arrow in the city and neither one is shy about telling Barry so. Joe demands Barry tell Oliver to leave, Barry stands up for Arrow citing that he knows and trusts Oliver, and Central City has nothing to fear – all the detective in Joe knows is Arrow is a wanted murderer and not the good kind of vigilante. Barry naturally tries to make them understand (without giving away any secrets) that isn’t the man Arrow is anymore. Wells meanwhile doesn’t trust anyone he doesn’t know (so he says) and attempts to ply the information from Felicity, who resolutely keeps the secret and aptly tells Wells it’s not her secret to tell. (Go, Felicity!) Any more information gathering is interrupted by the boomerang coming to life and chasing Caitlin around the room – fortunately, everyone is okay.

Oliver McQueen’s Lessons and an I.D.

Thanks to Felicity’s facial software, the lab I.D.s where their robber is and Barry believes he can go it alone ignoring all suggestions that they call Oliver. Their standoff doesn’t go so well and the robber seems to get to Barry with his ability to turn anyone inside out – Barry affected with the glowing eyes. Back at the labs, Barry’s eyes are scanned and he shares what happened during the experience, everything went red he says. Trying to make him see reason, in a fit of annoyance, Barry tells Caitlin to leave him alone – that he’s not Ronnie. This prompts Felicity to call him a loveable “dummy.” Oliver again tries to reach, teach and guide Barry (as he did earlier in the episode when he put an arrow in Barry’s back – for training purposes only), trying to help him not make the same mistakes he has. Barry assumes Oliver is jealous accusing him of wishing he could be Barry, which is why he wants to go everything alone. 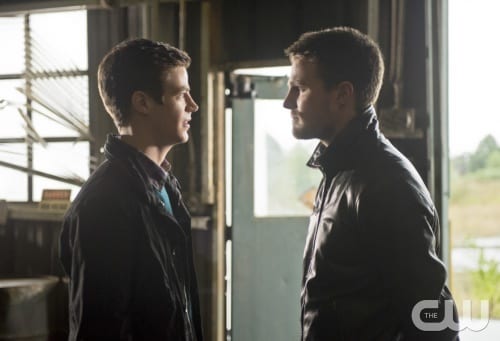 Everything builds inside Barry, leading to a breakdown with the Captain following Barry’s conversation with Oliver. The robber’s interaction has had an effect on him and turns out, his eyes are still glowing, building a slow rage in Barry. Witnessing Barry’s challenge of their boss, Joe reports back to the labs, Oliver reports to Felicity what happened during their training lesson and horribly, Wells discovers who Arrow is.

Next comes the real trouble. Earlier in the show, Eddie lobbied for a task force to stop the Flash. This pushed Iris to again meet with the Flash to warn him that Eddie wants to put a stop to his crusade to help people. (If possible, Iris seems more enchanted with the Flash when he leaves.) Iris tries to convince Eddie that he’s not bad; she confesses that she’s met with the Flash angering Eddie and Barry confronts Eddie in his heightened, hyperactive state as the Flash. Things go array during this showdown.

Team Arrow is trying to stop Barry’s stem of vengeance again Eddie. Fortunately, Oliver shows up in time to save Eddie from further abuse although Barry gets the upper hand on Oliver (all the while back at the lab, Cisco and Diggle take bets on who will win). Barry surprises Oliver with his ability to stave off anything Oliver throws at him causing the two to get into an epic fight of wills. Wells and Joe arrive on the scene just in time to stop Barry with a device meant to deactivate whatever was inside him. Immediately, Barry is back to his normal self and the two friends are back to laughing and joking – Oliver even finally refers to Barry’s villain as a metahuman.

Next capture we see is Oliver and Barry putting away Caitlin’s “Rainbow Raider” though before Oliver leaves he asks everyone to keep his secret for many reasons – and he even throws in a threat or two. Oliver and Wells part amicably though Oliver believes there is something off about the guy. As things draw to a close, a roughed up Eddie again makes his case for putting together a taskforce to bring down not just the Flash but Arrow as well who Joe is judging for his methods though now he knows his identity may have a dilemma on his hands. Eddie gets his task force approved. Felicity, Barry, and Oliver stop by Iris’ café before they leave; Oliver and Barry talk. Barry’s feelings seem to be kept bottled up and he admits he has a lot to learn. Oliver advises Barry let Iris go as the two men stare longingly at the women who have their hearts (this scene, oh my! Definitely worthy of a romantic sigh or two – and maybe even a proper slap to these men’s heads) – Oliver tells him guys like them don’t get the girl.

Ignoring Oliver’s counsel and pursuing the only way he can feel important to Iris – by way of showing more than feelings of friendship to Iris, the Flash meets with her again hoping to explain his behavior. Iris has a conversation with the Flash telling him to stay away; he’s not the man she thought he was and she no longer wants to have anything to do with him. Ominously, part one wraps with Caitlin fondly remembering her fiancé flashing to a dark alley with a homeless man set aflame… a man who looks an awful lot like Ronnie.

…and I’d be remiss if I didn’t add my annoyed two cents here: really?! It’s the biggest cliché in the book to resurrect dead characters. For once, I wish a character that was meant to have died would remain so.

Random Events in Flash vs. Arrow

Do you think that final bombshell is going to cause more problems for Olicity and if so, how do you think it will affect them? What about Iris and the Flash? Are they already doomed or does Barry still have a chance? Share any of your comments or speculation below – and make sure to tune into the CW tonight to catch the follow-up in Arrow and watch for our recap of that episode later this week.

Next week it sounds like we’ll learn more about Barry’s mother’s killer. Join me then.

Our romance-themed entertainment site is on a mission to help you find the best period dramas, romance movies, TV shows, and books. Other topics include Jane Austen, Classic Hollywood, TV Couples, Fairy Tales, Romantic Living, Romanticism, and more. We’re damsels not in distress fighting for the all-new optimistic Romantic Revolution. Join us and subscribe. For more information, see our About, Old-Fashioned Romance 101, Modern Romanticism 101, and Romantic Living 101.
Pin this article to read later! And make sure to follow us on Pinterest.
By Rissi JC on December 3rd, 2014